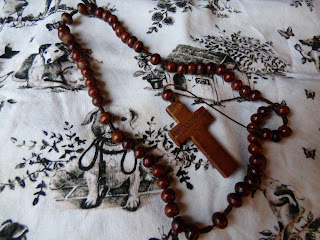 When I was a child, the Rosary was an important part of practising the Catholic faith. The prayer would be said in Church services but it was also strongly encouraged as a communal evening prayer in Catholic homes.

Looking back, it seems to me that we did not always say the Family Rosary. I'm sure that we mostly said it but there were times when the prayer fell by the wayside. When the parents resurrected it after a fallow period I mightily resented it. Maybe that was the problem. If it had been said every single night I'd have been used to it.

I hated the Rosary. Ah sure there were times when I was trying to reconcile myself to a decent practice of the religion that I tried to like it but I could not. It was long and dreary and boring and tedious and off-putting. In the chapel, I could bear it but home – sure there were a million better things you could be doing, watching The Man From Uncle, playing with Bunty dolls, listening to Radio Luxembourg, reading books, fighting with the sisters, even just thinking.

Apparently, you were supposed to 'dwell' on the Mysteries. The Joyful were dreary, The Glorious tedious and the Sorrowful, they were interesting but, ultimately, deeply depressing. The Rosary just did not do it for me.

Then, when the five decades were completed there were end prayers. I think we did three. I actually liked the Memorare and can recite it to this day. The rest were an awful drag.

The worst Rosaries of all were when the parents decided to say it on the way home from visiting relatives, late in the evening when you'd be tired. It was so intrusive. Riding in the car, all of us children asleep or half-asleep was an introspective, thinking time, not a time to be reciting some dreary dirge of a prayer.

Y'know when I look back I think I must always have been a Crap Catholic.

Mary that is a brilliant & hilarious piece! We never said it in our house but I think I got caught in your house & def at Teresa’s!

We never did in our house either but I remember the mother making Clare and I memorise the Memorare. Which was a bit much when she didn't know it herself.

Nice memory of sleepovers at granny and grandad's. Still kept the tradition in their later years

This made me laugh.
To be honest the whole mumbling chant was so bloody monotonous. I hated it too. I remember when it your turn to site the decade - my other siblings used to tickle, make faces or pretend to fart.
I'm non-religious.

Only sensible way to be.