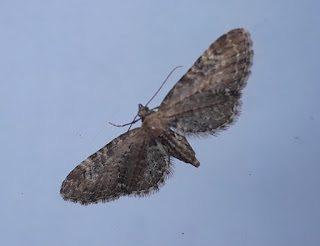 My legs hurt, and have been sore now for sixteen days. Most nights I wake up with cramp, sometimes very painful. Because of this, I am taking shorter walks, usually 30-40 minutes in the woods every evening. Holly de Cat likes this walk too as do the dogs. A few evenings ago we saw Foxy there, handsome, fast and red as fire with a white-tipped tail. I've noticed too, a few patches of bluebells here and there. Maybe in years to come, they will spread and it will become a bluebell wood. I'll not see it but am glad to have seen the possibility of it.

I realised today that having one's own woods and bluebells puts us on a par with the likes of Mr Cummings although I suspect his family's woods covers more ground and has many more bluebells. Ours is far from the road and it would be unlikely that anyone would ever spot us breaking lockdown there.

Disappointing catch in the light trap this morning. Eight White Ermines and nothing else so I was pleased when Bert called me to ask what the moth on the sunroom door was. He held some white paper behind it and I got this photograph. It's not very good but a picture helps with identification. It might be a Common Pug. I'm not sure. The trap is in a different part of the garden tonight so maybe I'll see something interesting tomorrow. It sure gets me out of bed in the morning, checking, taking pictures and recording. Even with my stiff crampy legs and even before I make coffee. 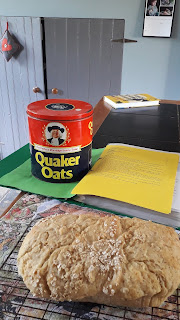 
I'm right in the middle of preparing porridge bread when the phone rings. The person on the other end has a drawly, disinterested Southern English accent.

This is Dylan. I'm calling about your washing machine insurance.

It's due to expire.

That's goood. Now, as I said, the insurance is about to run out and we can...

Who do you work for?

I hope you don't mind me saying but this sounds like a scam.

It is a scam. You can hang up now.


So I do. And I don't even have washing machine insurance. Next time I'm going to play the scatty old lady, not able to find my purse etc. for my credit card details, then when I've wasted a good ten minutes of his time I'm going to shout into the phone, YOU CAN FUCK RIGHT OFF!
Posted by Nelly at 9:56 pm 3 comments:

Diary Of a Young Naturalist 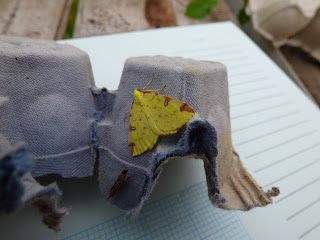 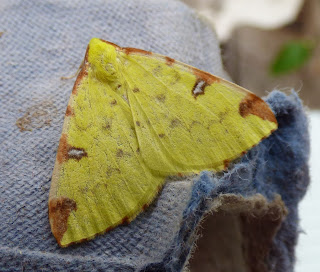 Brimstone moths aren't that uncommon, yet I'm always pleased to see one turn up in the light trap. When it comes to the natural world, yellow is my favourite colour, closely followed by blue.

So it is only to be expected that the cover design of naturalist Dara McAnulty's first book appealed to me greatly.  Dara is from Northern Ireland, he is sixteen years old, he is autistic and he is passionate about the natural world. He started blogging about four years ago and I discovered his blog about a year in. It was inspiring and will give this young man a lot of credit for re-awakening my own interest in nature. I'm expecting his book in the post tomorrow and am excited to read it. Thank you, Dara. 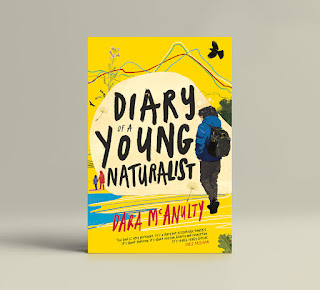 I Wish There Could Be More Hugs 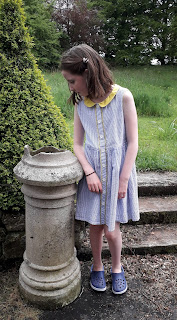 Bert and I went on an exciting road trip yesterday. Garden Centres are open again and everyone wants Bert's excellent clematis. We had a quick drop off in Antrim then it was off to Portglenone via Randalstown. Bert once worked for a fellow who went via Randalstown no matter where he was going and, as far as I know, he didn't even have a special friend who lived in there. Bert hadn't planned to go that way and was actually going to return to Cullybackey! He didn't know that Randalstown is the gateway to the rest of the world but I persuaded him that it would be exciting. It takes very little to please us in these days of lockdown.

We went via the Largy Road and as we came closer to Portglenone started to see knots of people standing at gateways. What's going on? The only thing we could think of was a funeral. Funerals are different now. Services are private and only a very small number of people can attend the graveside. There can be no wake. But, as we got closer to the village the crowds grew larger. There must have been a hundred or more people gathered outside the old chapel across from the forest. Social distancing was non-existent.

Being nosy, I looked up Funeral Times on my phone. The man whose funeral had just taken place was a member of a large and well-connected family. He was a retired school teacher, had a brother a priest, played Gaelic at Uni and was well thought of in his community. There were a lot of people at his funeral but if it hadn't been for coronavirus there would have been hundreds more. I hope they will all be OK. 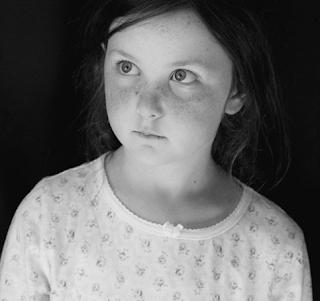 Zoe tells me that Evie has given up on personal grooming and rarely washes her face or combs her hair. She still brushes her teeth (I hope). I saw her today at a 2-metre distance and she looked pretty fine to me. I would have loved to give her a cuddle and sniff her shiny brown hair.

She went for a walk in the fields with Bert. It's easy to keep a distance there. They were looking for the pigs. Bert said they tramped around for at least 45 minutes but no sign of Rusty and Lily. It was only on the way back that he remembered that he hadn't actually let them out and that they were still snoring in the shed. Poor pigs. They must have been peckish. I gave Rusty one of the naans I'd made for last night's supper. Waste of flour really - they weren't very good. Rusty did not agree. He thought they were so delicious that he followed me and tried to come into the house looking for more. Evie was appalled. 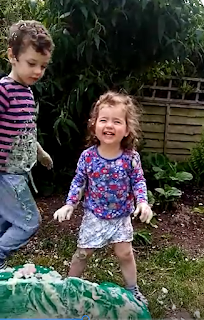 Katy shared a video of James and Emily playing in the garden. Emily is so jolly and never seems to stop laughing. I got a pang about that. They are all supposed to be coming to visit in August but how can we be sure that it will still happen? Everything is up in the air. Plans mean nothing. We live for the moment. As Emily does.
Posted by Nelly at 9:28 pm No comments:

A Walk In The Woods 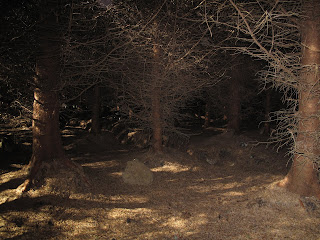 I only intended to take a short walk this evening because I'd been busy, weeding the garden, dealing with scutch grass, baking, checking the hens every hour because those fuckers aren't doing their job. One solitary egg today, not enough for the amount of corn, layer's pellets and leftover porridge youse are getting, not to mention all those shot brassicas I'm hauling into you. Then there was sorting and shelving the non-fiction. Today I did horticulture and Irish, then I made dinner, then I opened a bottle of compensatory lockdown, had one glass and went for a walk in the woods.

Do you ever check out those new trees I planted?

No. Not for ages.

Bert, Hannah and I all go to different places in the woods. I hack around Dave's Camp, Bert moseys around the deciduous end and Hannah favours the witchy, swampy bit.

I went to Bert's newly planted trees, tramped through the witchy, swampy part and was heading to Dave's Camp when I realised I'd lost my phone. Backtracked - no phone. I went home, borrowed Bert's phone, went back to the woods. Of course, in my distracted mood, I tripped on a tree root, fell over, narrowly missed a nettle patch and said out loud,

Of course, that was going to happen!

When a body is in one's sixty-seventh year, a body does not spring up from such a fall. Instead, a body takes stock of where it is, where the nettles are and how it is going to shift itself to a standing position. Afterwards, it might think to itself, what would Madonna have done in such a circumstance?  One decides that Madonna would not have arisen from the ground with any more dignity than Nelly, and would certainly have cursed far more than Nelly did. Madonna is not used to nettles, nor would she appreciate them as a food source for so many moths and butterflies as Nelly does.

I was ten minutes from home and it was time to employ Bert's phone. It is a simple gadget and as I am accustomed to a smartphone I find it decidedly un-user-friendly. At least I am number one in his contacts list which makes things easier. This wasn't always the case. It irritated me that the Aarons, Alans and Arthurs came before me so I changed my handle on his phone from Mary (my real name) to A Wife. I ring A Wife and I hear a little tinkle in the distance. I walk towards it, the tinkle is louder, and there is my phone hiding in a patch of dead branches. If I could I'd have taken a photo of the wee darling but Bert's phone takes shite photographs.

You know, losing my phone was worth it for the pleasure of finding it again. I went home, met Bert on the way who was wandering out to help me look for it, went indoors, poured a glass of wine, set up the moth trap, put the porridge loaf in the oven and watched an episode of Normal People which is a whole other story.
Posted by Nelly at 11:37 pm 6 comments:

Bluebells And Other Matters

No Portglenone bluebells for me this year, instead of the blue carpeted forest, just this tiny little patch of bluebells a field length from our house. 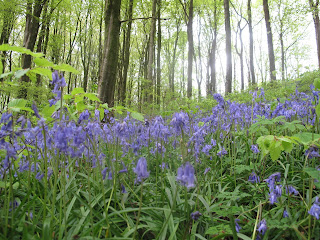 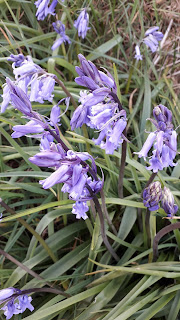 The field across the road

We had a small loss this week. A pair of robins had a nest in the polytunnel, built inside a flowerpot that lay on its side on a potting bench. Bert had arranged other pots around it so that it would be difficult for cats to get near. If we were quiet and still we'd see the robins carry food to the hatchlings. I hadn't looked but Bert had peeked and reported two young ones. A couple of days ago the parents stopped coming and when Bert checked the nest was empty. The other pots hadn't been moved so it might have been raided by a rat. The robins will have to try again.

I didn't watch Mr Johnson's broadcast to the nation last night but reading online reports this morning it seems not to have gone down too well. Apparently, we are to trust in good, solid British common sense. Speaking for myself, I'd prefer some good, solid leadership.
Posted by Nelly at 10:47 pm 1 comment:


This handsome beetle is a cockchafer, no friend to gardeners, especially those who like a nice smooth lawn. Discovered in the moth trap this morning, it rested for most of the day and after climbing to the top of a wild strawberry launching pad flew off with a loud drone. Sadly I did not capture that but will know for the next time.

Notice that the birdsong is not yet drowned by the noise of the traffic on the B96 but it's getting there. Every day there seem to be more cars out and about. Their journeys cannot all be essential.
Posted by Nelly at 5:49 pm 3 comments: