I hereby announce that I will post to this blog every single day in December. I've already bought and given most of my Christmas presents so I should have the time.

It's a week since I posted and I've been busy, busy, busy. Busy doing what? As my reader might ask. 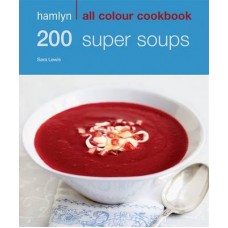 I have been making soup, all from this trusty little book 200 Super Soups by Sara Lewis. So far I've made four of them so only another 196 to go. Tonight we had mulligatawny and it was delicious. It allowed me to use up some rather elderly lentils and sultanas and they were perfectly fine. At least I hope so. So, if I don't post tomorrow it will because I have died from ancient lentil poisoning. 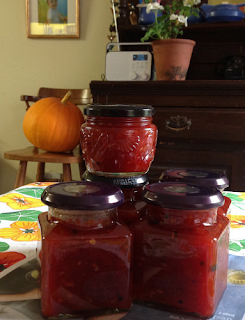 I also made more chilli jam from the very last of the crop. 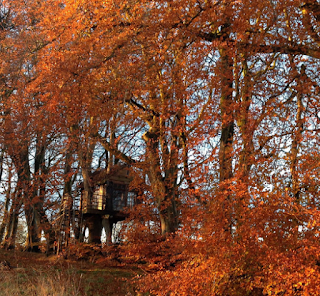 And then there were the autumn leaves. That lot came down in one big dump and I've been collecting wheelbarrow loads and making a huge leaf pile under the trees. In two years time it will have turned into wonderful leaf mould. There are still lots to gather and if it is pleasant tomorrow I'll get the girls to help me. Looking forward to it already.

And what of my inner life? Well... I'm still trying to come to terms with what appears to be the new world order and the rise of the right. At least I'm not dreaming about killing that man any more. Negative energy Nelly, negative energy.
Posted by Nelly at 8:53 pm No comments:

As almost everyone agrees breast feeding is very advantageous to mother and child. I'm in favour for I was breast fed myself and nursed all my children beyond a year old. My own daughters did not break the tradition. In all likelihood we're from a long line of breast feeding mums that stretch back to Cro-Magnons and beyond. It was touch and go with me and my ma though. I weighed a mere 5 and a half pounds at birth and afterwards was failing to thrive. The District Nurse was on the yard every single day, had me stripped and on the scales and my poor mother demented with worry. So worried that she wasn't eating so no wonder I was losing those precious ounces. It wasn't until my Aunt Sadie called and advised Matty to make me a bottle of formula, thickened with Farex and sweetened with sugar that I stopped crying with hunger.

Of course I don't remember any of this but in my subconscious there was fear laid down from that early starving. It would explain my childhood greed, a greed that has continued throughout my entire life and that has resulted in my carrying extra weight for most of that life. Or 'being fat' as a plain-speaking person might say. Being fat.

I like to think that I reached peak fatness at 9pm last Sunday night. I'd been in contemplation and starting the next day resolved to eat in a more sensible manner. After all, I'm not that starving infant any more - I'm a grown-up woman who knows exactly when and where her next meal is coming from.  So here's hoping to get from peak fatness to peak fitness. I'm on my way.

In Praise of Aunts

A short time ago Miss Martha was asked if she owned many Aunts. She replied that she had just the two but that she was in possession of many Great-Aunts. She actually has four Great-Aunts of her blood and three Great-Uncles. One Great-Uncle she has yet to meet. I believe he lives in the South of France. Martha is very impressed with her Aunts (and Uncles) and, after our recent trip to Sligo for Great-Aunt Leitrim Sister's graduation she said that she would like it if we all, her sister, parents, grandparents, cousins, aunts and uncles all lived together in the Great Southern Hotel, Sligo forever and ever. Well - it did have a swimming pool and an amazing breakfast bar. I don't know what we'd do with our dogs, cats, chickens and pigs though. Martha hadn't thought that one through. There are at least eleven dogs in our family alone. And I'd miss the poly tunnels.

My own three daughters lives were greatly enhanced by Aunts. For a time all four of them lived in London and they welcomed their nieces every year just as soon as they were old enough to travel alone.  Summer jobs were provided too and their experience widened in a safe and loving environment. Then one of the London Sisters became a Kerry Sister and there was some place else to be.

I wasn't short of Aunts myself. Five on my mother's side and two on my father's and a veritable Heap of Aunts by marriage. We made no difference - an Aunt was an Aunt. Vancouver Brother stayed with me last week and we visited a few of them, one my mother's sister - the last of the Blood Aunts and two By Marriage Aunts. It was very satisfactory. The funny thing about Aunts is, as we all get older, the age difference gets smaller. At Martha's age I thought they were elderly. They were merely in their late twenties and early thirties. Now I'm not a kick in the arse behind these amazing women in their eighties who are still getting on with their lives. They are maybe a little frailer but wiser and just as kind as ever they were.

I possess two nephews, three nieces and three great-nieces though I'm not much good at the Aunt thing. My children, my grandchildren and even myself have received great benefits from the Aunts in our lives and there's me - mediocre Ol' Aunt Nelly. Something to ponder on. 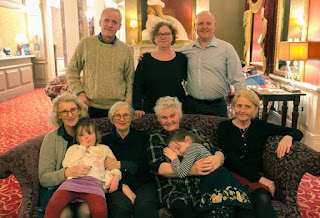 Martha and Evie hanging out with all the Great-Aunts and two Great-Uncles. And me.

I was so taken with my recent Aunt Contact that I sought another one out today. A By Marriage one who showed me great kindnesses in my younger days.She lives only a bare ten miles away and yet it is well over a year since I visited. I need to be a better Niece as well as a better Aunt.
Posted by Nelly at 8:32 pm No comments:

This day last week we returned from Sligo where we'd spent several days celebrating Leitrim Sister's graduation. Sorry - that should be Dr Leitrim Sister for clever Dede achieved a Ph.D. This day last week was a fine bright day and it was six days since I'd set foot in the poly tunnel. It was to be another seven before I poked my nose in there to find that lovely Bert has been keeping up with a bit of light watering and also, that I have another flush of bright red and fiery chillis.

This day last week the results of the U.S. elections were still in the future and it was a strong talking point in Sligo, Cullybackey and everywhere else. Most people felt that Hillary would prevail but I felt uneasy about it.

This day last week I was happy to be back in my messy house. It would be another seven days before I came close to catching up. Maybe this day next week. 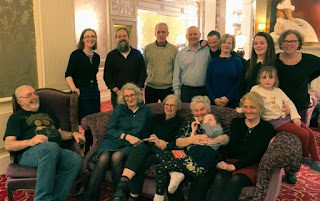 Just some of the family in Sligo last Sunday. Dr Leitrim Sister is the one on the far right.
Posted by Nelly at 8:09 pm 3 comments: