It is four weeks today since Rusty gave me a knee injury. I thought I'd gotten away with it but it was not to be. I now have a 'hip', a 'knee' and a 'shin'. I know most people possess these body parts but mine are special. Especially sore. I am scoffing so many painkillers that my stomach is starting to ache. Sometimes if I hurt it a little bit more (which seems to happen very easily) I find myself limping or, as we say in Northern Ireland, harpling about. I have never felt so old.

In fact, the situation is so dire I am seriously considering going to the doctor. At least I'll be making a start on the road to bionic leg-parts.

Other pleasanter news is that we are getting a tree house. The foundations were laid yesterday. When houses are built in trees the true foundations are the trees themselves but there are other supports needed. The adults are very excited and I hope the children will be excited too. And I hope that my damn knee gets better for we haven't incorporated a chair lift into the plans. 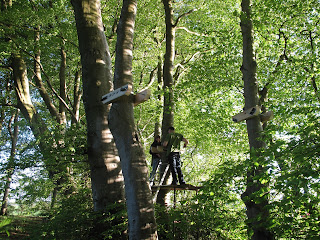 Bert and I have just come back from a short break in Donegal. We weren't on our own. We had four dogs, the Banjos and Swisser as well. Swisser got a new nickname – Professor Pants. She was waxing superior over dinner, told Jazzer and I that we had given over the control of our lives to our husbands because we are currently not working. I was having none of that. Just because someone is Professor Pants does not give them the right to judge how others organise their lives. Anyways Swisser was just pissed off that her youngest dog didn't get to come but we had to put a lid on it somewhere. Our caravan, we get to take all three of our dogs if we choose. We made a concession for the Banjo's youngest dog who is our youngest dog's litter mate. They are wild together. And as Swisser's youngest dog is also their litter mate the canine craziness would have been unbearable. He'll get to come the next time. 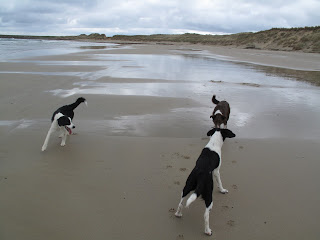 Once again it was Bonnie's last holiday. She is so old and done now that we have to lift her in and our of the van and she needs help getting up stairs and on to sofas. She was not able to get to Ballyhiernan beach because it meant climbing some pretty steep sand dunes so, just before we left, we took her to another beach that was easier for her to get to. Just seeing her there, plodding along, trying to keep up with the younger dogs was nearly tragic. Her back legs are getting weaker and it is much more noticeable when she is in unfamiliar surroundings. I wonder how much longer she can continue. But she had her little break, she was with people and dogs that she knows love her and I think she enjoyed it. 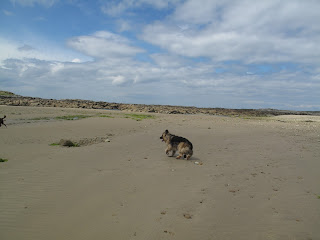 I wonder if she will be able to squeeze in just one more 'last' holiday?

By the way Swisser really is a professor now and about time too! I think adding Pants to her title will help her to keep everything in proportion.
Posted by Nelly at 10:21 pm 2 comments:

A Cure For Procrastination

I am trying something new in my ongoing personal quest to reprogramme my brain.  It is this - when thoughts, such as these, pop into my mind,

I do not want to pick up that dirty laundry and take it to the washing machine.

Damn those dirty cups! It would be too dreary to remove them to the kitchen.

Why is it always me who has to check on Pearlie's fire? I don't want to.

Then that is exactly what I do. I pick up the laundry, I lift the cups, I fix Pearlie's fire. But first I must - have a cup of coffee, write this blog entry, check the time in Vancouver and the temperature in Fakenham, see if Natalie has uploaded new photos, delete some spam and have another cup of coffee.

It's an ongoing battle.

Note to self: I wonder if there is a site that takes tired old phrases such as 'it's an ongoing battle' and turns them into something fresh and new? Must check....

The left side of your brain controls verbal ability, attention to detail, and reasoning.
Left brained people are good at communication and persuading others.
If you're left brained, you are likely good at math and logic.
Your left brain prefers dogs, reading, and quiet.

The right side of your brain is all about creativity and flexibility.
Daring and intuitive, right brained people see the world in their unique way.
If you're right brained, you likely have a talent for creative writing and art.
Your right brain prefers day dreaming, philosophy, and sports.


Are You Right or Left Brained?


Blogthings: Quizzes and Tests and Memes, Oh My!

So I accquired one of these new-fangled smart phones. A young friend was upgrading and I remarked if he was thinking of selling his old one I might be interested. Then forgot about it. He mentioned it to me again and I checked the second-hand value. It was quite a bit dearer than I could afford at present.

Maybe I'll wait until you're doing your next upgrade and by that time I might have a bit more spare cash floating around.

Y'know I'd rather sell it to someone like you for (mentions a sum 35% less than its worth) than to some other wanker for £x.


How could I refuse?

By good chance I got my new phone set up on the very day that Jess ate Bert's old phone so was able to recycle my old phone to him.

So. I have a smart phone. It is fun but I wonder if it might actually be too smart for me. We shall see. 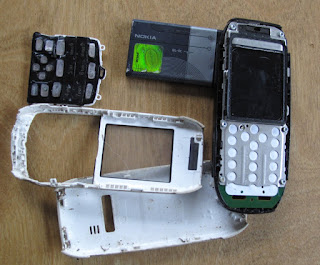 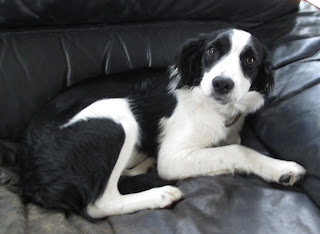 There is so much comment spam coming to this blog that I am considering moderating comments. It is not a step that I want to take but I'm getting very cheesed off at the amount of time I'm wasting deleting trashy, unwanted comments.
Posted by Nelly at 9:44 pm 5 comments:

Yes. He Did It Again. 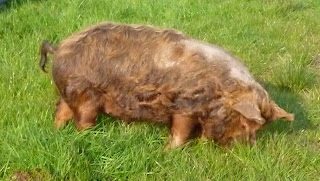 It was last September when Rusty first knocked me off my feet and he has went and gone and did it again. I was carrying a gigantic bucket of goodies down to their paddock and while I was looking for a sweet, clean place to dump it out, Rusty all impatience, barrelled through my legs and lifted me off my feet. Yes folks, for a split second or so I was sitting atop his broad back and he just kept barrelling on and I knew for certain I was for landing on my arse. Wish I'd followed through on that one for all I'd have got would have been a soft if muddy landing. But I thought it best to try to stay on my feet and that was my downfall. People, when trying to extol the virtues of the smaller pig, say, "They'll only grow to knee height." That is all very well but they forget to mention that the 'small' pig will likely grow to around two foot wide. I know that when Rusty dove between my legs I ended up standing on tippy-toes with my legs well extended and it was when I tried to keep my balance that I twisted my knee.

Oh! The agony. At first I couldn't even put my foot on the ground. As I stood there one-legged, crying with pain and frustration I really had no idea how I was going to make it back to the house. After a few minutes I found I could weight bear but it was no fun and I made my way slowly and uncertainly to the house. Bert was, as usual, totally unsympathetic although he did help me off with my wellies which were very filthy indeed.

That was three days ago. The first two were rather limpy and I had to go up and downstairs a step at a time like a one-year-old child. No more running up and down the stairs for me. Every step was painful but I soldiered on. That was the first piece of advice I got. Keep moving. Then someone else said, "You should stay off it. Rest a couple of days." Too late. I had spent those couple of days 'keeping moving'. Some folk said, "It will be months before that gets better." Who knows? It is three days since Rusty lamed me and today the knee is still sore but the strength is returning to it. I go upstairs and down in the normal way although it does hurt a little.

There is just one thing I haven't done since Tuesday morning and that is - I haven't gone near those damn pigs. Pigs are rough. Very rough indeed. Anyone who is tempted by the thought of a pet pig should bear that in mind. And did I mention the tusks?