A Party Of Sorts

This Saturday past was my mother's second anniversary. I chose to fill it with friends. The day went past. I spoke to a number of my sisters and I made an arrangement to visit with my youngest brother on the Sunday (today).

Swisser was supposed to visit yesterday but she cancelled. She texted Bert saying that she did not want to interrupt our party. Our party! I confess I was miffed of being accused of a party on Matty's anniversary. If it was a party this is what occurred, We ate sausages and mash cooked by Jazzer. We did drink wine. Mel visited us from Edinburgh and brought whisky. Bert drunk some of that and so did Jazzer although she ought not to have. Marty and Jazzer shared some of their experiences of growing up in Belfast during the 1970s and I read excerpts aloud from Lost Lives. Marty retired to the kitchen and played claw hammer banjo for hours.

There came a point in the evening, maybe after her second glass of Scapa, when Jazzer flipped. This is a regular occurrence. She goes from being a relatively normal person to one who is sensitive, defensive and argumentative. It goes something like this, I'll say,

Ben is an absolute gentleman. He really is an excellent young fellow. Everyone thinks the world of him. You couldn't wish for a better son.

Jazzer goes on the defence,

My other kids are fantastic too. They really are great. I won't have a word said against them.

You've flipped you bint! Over the edge. No more 16 year old single malt whisky for you!

It seemed to work. Jazzer calmed down. Maybe twenty minutes afterwards this exchange Jazzer's pup Dora jumped up beside me. I stroked her absent-mindedly. Dora is our pup's sister so I don't wish to show favouritism. Jazzer's old dog Frank is snuggled up on my other side. Jazzer reciprocates on the other sofa by scratching my old dog's ears and giving her lots of pets. Old Bonnie groans with pleasure. I say to Mel,

Dora really is the sweetest little dog. She has a lovely nature.

What about Frank? Frank is a lovely dog too! He has a lovely nature as well.

I turn to her sympathetically and say.

Wise up you daft bitch. Can I not even say something nice about one of your dogs without you taking it as a slight against your other dog? Start drinking tea this minute!

We sure know how to party in Springhill.

While Nelly blogs, Bert makes the supper. Tonight we are having poached egg on toast with a side dish of grilled tomatoes and sausages.

What will Pearlie eat?

She might try a wee sausage if I peel it for her.


Pearlie cannot be having any foodstuff with a skin, a crust or a peel for she hates texture nearly as much as she hates music. Music she cannot be doing with,


She does like some music. She likes old-fashioned dirgey hymns such as 'How Great Thou Art' and she likes Scottish pipe bands. All else is dinnle.

And she likes her sausages peeled and her fish fingers shaven of breadcrumbs. She wants the crusts cut off her bread. I won't do that. Crusts cut off bread? That is just attention seeking. Since I've been giving her pan slice intacta I've noticed she eats much more of it for she nibbles right down to the crusty brown skin. That has to be a good thing.

And do you know something else? They put coverings on processed foods for a reason. Ever seen a skinned sausage? There is only one thing worse and that is a peeled fish finger. Those breadcrumbs are there for a reason. They are there to make the 'fish' look white instead of a dirty greeny-grey colour. We serve the stripped finger to Pearlie with a side of bread and butter and a cup of tea. Nice, warm tea. She  drinks her tea and eats the bread right down to the crusty brown skin. And later on the cat will eat the unwanted and unappetising fish finger. I'm going to tell Pearlie that fish fingers have been prohibited by law.
Posted by Nelly at 7:35 pm 4 comments: 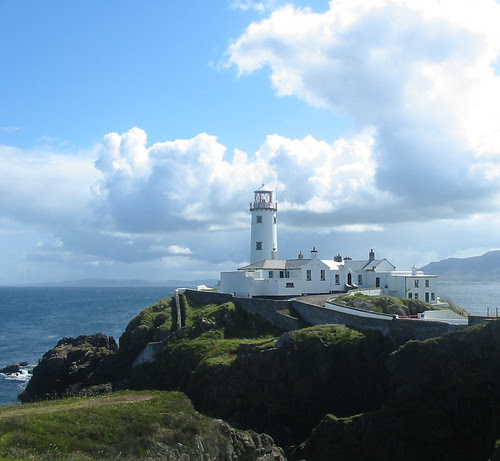 Fanad, originally uploaded by NellyMoser.
If you should happen to be looking for me this weekend I'll probably be on a dander to that there lighthouse.
Posted by Nelly at 11:23 am 5 comments: 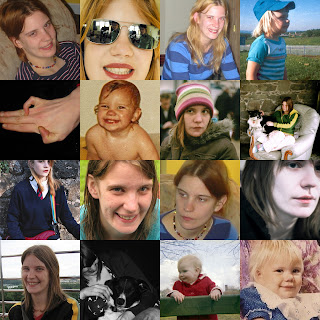 Last week was for pondering and gardening. Writing? Not so much.

A week ago Mrs Thatcher popped her clogs which made for a lot of discussion, thinking and remembering.  A friend of ours told us once that there was a bottle of champagne he intended to drink when she finally expired. On Friday I asked him if he'd done so. He said he had changed his mind, that he would not allow her to affect his present as her policies had affected his past.

Then I was presented with a home truth by my dear husband, which landed true and took root. Still thinking about that one and will write about it another time.

Then I realised that Pearlie Blue has been living with us for almost five years, not four as I'd previously thought. They do say time flies when one is enjoying oneself. It was around about this time five years ago that she fell and broke her hip. When she recovered from that (something I thought she'd never do) she moved in here. I well remember telling her that she would be coming to live with us and her reply which I thought might display some pathetic gratitude or other sentimental feeling. Not our Pearlie. Instead she snarled,


I should have been in with youse ten years ago!

I murmured something about that not really being practical. Imagine! An ambulatory Pearlie wandering about, interfering, poking in drawers, standing in the way. She was always tremendously good at being in the way and still is I suppose.

So, sowing and planting and watching Game of Thrones and Mad Men, listening to and absorbing home truths, thinking about the eighties and the eighty-somethings, going to Ikea with my darling girls and taking our darling girl Hannah out for her birthday. We ate at Spice and went to see Good Vibrations. Good film. Lot of Game of Thrones actors in it.

It is Hannah Banana's birthday today so I must finish this and go see if I can find the birthday cake candles. Not that Hannah cares but it is extremely important to Martha.

Two Down, Three To Go

It is probably ten years or more since I lumped Margaret Thatcher, the Queen, Matty, Pearlie and Ian Paisley together as a cohort. I banded them on age as they were all born within a nine month period. If Matty was feeling 'old' I'd say to her, "Have you seen the state of Paisley? He's looking his age for sure! And the harples* of him! You? You're like a lilty** yet!" Or she'd think her mind wasn't as sharp as it used to be. "Sharp! You're as sharp as a tack. Didn't you win a tenner for completing the Irish News crossword the other week? Imagine being like Maggie Thatcher. Sure she has to be told every day that Denis is dead. Wouldn't that be awful?"

And there was always Pearlie who, couldn't walk, could barely eat, had no way with her and had precious few friends. While Matty was, without doubt, the most popular woman in her road and rarely wanted company or outings.

And the Queen. "Mum, that poor woman. Sure she's great for her age and wants for nothing but she has hardly a minute to call her own and almost her entire family are on welfare! At least your kids have jobs."

Ten years ago I'd have wagered that Pearlie would go first, then Ian Paisley. After that it would be Thatcher, then Matty at 95 and the Queen at 100 or more. Instead it was Matty, the youngest of the five who was first to pass away. Now Thatcher has gone and it's happy for her I'd say. There was a recent photograph of her sitting on a park bench, in a good wool coat, wrinkled stockings and a pair of Hotter shoes on her feet. A little whippet was beside her and she was petting the dog which looked like a smaller, finer version of my Judy. I never liked Mrs T. Some part of me admired her as a person and a woman but I hated her dogma. I hated her stance on Ireland. But I loved that picture with the dog. She cannot have been all bad.

I was in hospital having Hannah when Thatcher went to war with Argentina. I was in hospital this morning when I heard of her death. Nobody seemed to care. It was just a diversion, like the Jeremy Kyle Show.

And I wondered who would be next. My prediction - Ian Paisley, then Pearlie, then the Queen. Surely Pearlie cannot outlive the Queen?

And hopefully I will outlive them all. The news from the hospital was good. So far.

Bert is opening and banging shut all the cupboard doors looking for 'something nice'. He lives in hope that fairies come to our house while he is asleep and leave vol-au-vents and macaroons for him to eat in the morning. Tough luck Bertram. The only fairy in this house is the Lidls fairy and she has left you some porridge. Try not to spill dry oats all over the floor like yesterday.

Meanwhile, in a town not very far away, a friend is reading the previous paragraph, which was posted on Facebook this morning. Within the hour her husband Rod had arrived at our door bearing a selection of fancy cakes. "I heard that Bert wanted something nice to eat." He then bundled our two younger dogs into his car and took them off for an hour's walk by the River Bann. He does this a lot so dogs are always thrilled to see him. In fact, Jess has been trained mostly by Rod and his wife. Trained to the lead and being trained not to bark at strangers.

So, while our dogs are being exercised we get on with our day. Ben, our current house guest, is making wooden guns. He is only 13 so that sort of thing pleases him. I don't see the point of the end product but I do approve of his learning to use saws, drills, lathes and the like. He is supposed to be mending the lid of the hen's nest box but he'll get round to it some day.

It was a beautiful today, blue skies, soft white clouds, bird song and bees. One of our hives did not make it through the winter so only the one left. Bert rotavated and ploughed and we put in a few potatoes. I planted onions and weeded the greenhouse, Les carried on with the erection of his poly tunnel and Marty did some therapeutic potting. We ate a lot of buns.
Posted by Nelly at 8:36 pm 6 comments: