I am sitting here tapping on the keyboard, door open. Across the landing in a darkened room, door also open, sleep Martha and Evie. I had to go out tonight for a few hours so Bert was the one responsible for putting them to bed. He did OK. One out of two isn't bad. When I got home Martha was asleep but Miss Evie was wide awake. One yogurt, a nappy change, brush teeth and a story and she was sleeping too. She'll still be up at six am tomorrow. 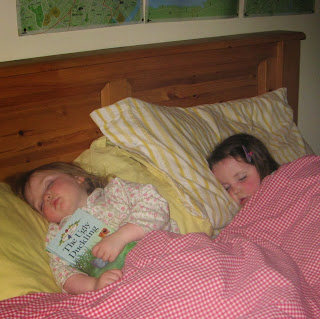 On Monday I went to Eelburn, just me and the brown dog. When I was in Vancouver I decided that there would be no more respite for Pearlie. She was becoming thoroughly fed up with it and the thought of going into residential care for two weeks at a time was spoiling her life. From now on we go on respite, she stays at home. That was what my three days in Donegal was about. I thought I'd be lonely but was not. It was so relaxing to have nothing to do. I spent a deal of time just staring into space. How come I never realised how great that is? Just staring into space. Wonderful. Judy and I did lots of walking and clambering over rocks which was fun but sadly I appear to have overused my knees which became apparent this evening. 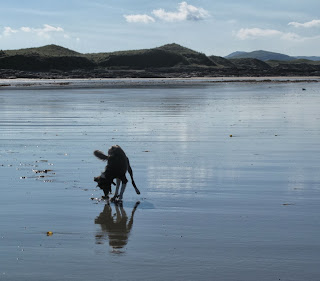 For this evening there was lots of kneeling and up and downing at the chapel for it was Cousin Joe's anniversary Mass. One year since he died. The service was beautiful with astounding music. While he was ill last September, too ill to receive visitors any more, I passed some time picking blackberries. Tonight when I got back Bert had opened a bottle of blackberry wine made from last year's picking. It was pretty fine. I wish I could have given Joe a share of it.
Posted by Nelly at 10:07 pm 6 comments: 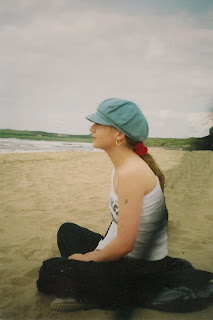 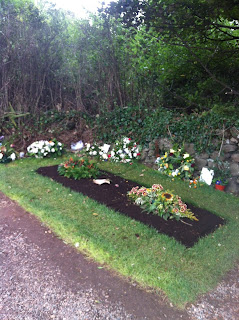 We were in Portglenone yesterday collecting vegetables for the kune kunes and decided to drive over to Bellaghy to visit Seamus Heaney's grave. It is just over a fortnight since he was laid to rest in that quiet cemetery and, it appears, that there is not a daylight hour passes that his grave is without visitors. It is a beautiful spot, Heaney's last resting place. Homely. I found myself thinking, as I've often thought at graves -  Taken far too soon. There was still so much to do.

And that is the way it is. We live and we die.

Last year when I picked blackberries I filled my ears with Sebastian Faulks' Birdsong and Nelson Mandela's Long Walk To Freedom. This year, no iPod so I just did thinking. Last year I thought about blackberry wine and jam and crumbles. Last year my audiobook blocked out anxious thoughts about my cousin Joe who was dying from a brain tumour. This year I thought of the very first Heaney poem I ever read. The blackberry one. I must have been in my early teens, the poet in his late twenties. It was the first piece of poetry I'd ever come across that spoke of the life I knew. I recognised that lust for picking.

So I picked blackberries and I got scratched and stung, my fingers stained purple and I thought about how fleeting and ephemeral life can be. We live, we die. We wither, we rot. No matter how much we love people, no matter how much we need them - they might leave us. Or we leave them.

Morbid? No. It is just life. Which is for living. The very best we can.

And that is why I will be making wine from my blackberries.

This has been my birthday weekend. Big special birthday, sixty years old. Guess this means I'm old now but being a glass half-full sort of person, I like to think I'm still on the young side of old.

We started with a children's party on Saturday. It had been a good enough week weather-wise but Saturday brought downpours. Children don't care about rain. They just need sausages, balloons, Haribo, puppies, each other's company and bouncy castles. They got all that plus Young Loveheart's three man catapult, a treasure hunt (got to work for those party bags) and a lot of muddy puddles to jump in. Next children's party I throw maybe I'll not bother with a bouncy castle and just get Clint up with his digger and he can create lots more muddy puddles which he can fill in afterwards. Clint loves playing with his digger. 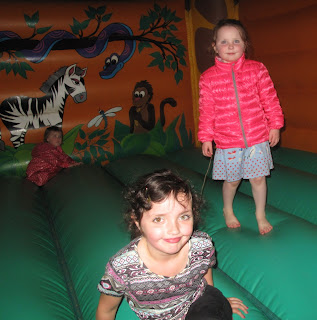 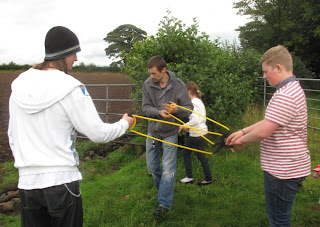 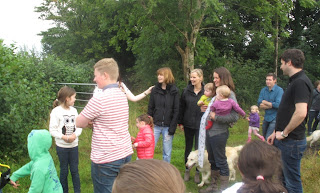 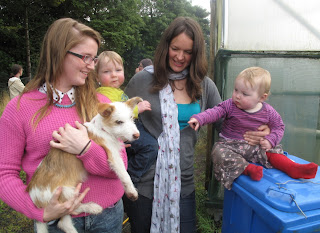 Some of  our guests

There were dramas. The original bouncy castle people let us down. Bad Fred! Fortunately we were able to get another one at an hour's notice. Good Mutley! And then Zoe's dog Gracie went missing. There were so many children and so many dogs that no one noticed for more than an hour. As I have mentioned many times before we live far too close to a busy B road where far too many people drive far too fast. In fact when Miss Mel and I were searching the verges we saw two cars racing each other. Would that I could have made a citizen's arrest of the idiots. There was a happy outcome for Gracie. She had got on the road, a quarter of a mile down it, but she was picked up by a young couple who immediately phoned the number on her collar disk. Unfortunately it was Zoe's house phone so no one got the message at the time. The young couple took charge of her until her owners raced home to see if there were messages. These good people delivered her back to Cully. Big sighs of relief from everyone.

The next stage of the party was in the BT club in Ballymena. Music and catering was all arranged so all we had to do was turn up. What can I say? It was a great night, wonderful music, great food, marvellous company. All the musicians were good friends, one was actually Bert playing his first ever gig. He was very nervous but he did well. The young brother did a few songs, Kerry Sister did a few more and Zoe sang too. I was so proud of them all. There were a few missing faces, some people on holiday, some not up to it, some, God forgive me, that we forgot to invite. It was that thing where Nelly thought Bert had asked them and Bert thought Nelly had.

Anyway – there wasn't a friend or sibling that didn't or couldn't make it that I didn't miss. And I realised this thing again. I am a tremendously fortunate woman. I have a good and loving family and Bert and I have great friends.

Sunday I spent with all the family at home. London Sister and Vancouver Brother sorely missed. We all went to Cemetery Sunday at St Comgalls in Antrim. I don't remember there being Cemetery Sundays when I was a child. It is a cunning ruse by the Catholic Church to shame the faithful and the faithless into keeping our ancestor's graves clean and tidy. Being closer to faithless I prefer to be advised by Blind Lemon Jefferson. It was a lovely thing to do as it felt like including Mammy and Daddy in the birthday celebrations. I also had the opportunity to say hello to aunts, cousins and neighbours.

Today was my actual birthday, the day I turned 60 although still haven't organised that bus pass! It was gardening day so had Martha, Evie and their minders for supper. We had mince pie, beans and birthday cake. In a three day period of fun, festivity and ancestor worship it had to be a best bit when the girls sang, Happy Birthday dear Granny, Happy Birthday to you. 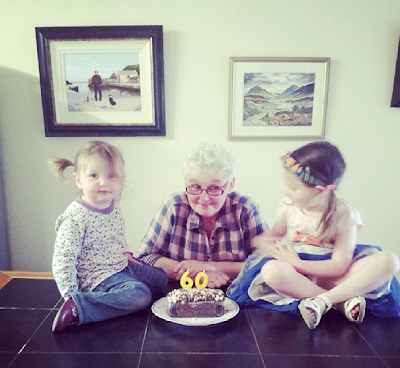