Keeping Up With The News

Never let it be said that Bert is not an avid follower of current events. You would only have had to overhear us this evening to know it.

Nelly: So what did Gerry say?

Bert: He said 'Don't be smart with me Sharon.'

Nelly: And what did Sharon say to him?

Of course what Gerry actually did say was 'Sharon, I wasn't. And don't be smart with me.' And it was Jane Canary in Deadwood who said 'Be fucked!' which is currently Nellybert's most favourite cuss. We think the use of the verb 'be' gives the eff word a real touch of class. But then we're strange like that.
Posted by Nelly at 9:45 pm 5 comments:

Free Food At The Braid

This evening we went to the International Food and Music Fair at the Braid. I was alerted to this event by the peeps in the Romanian Grocery Vending Emporium in Springwell Street and thought it might make for an interesting evening. I'd got the wrong end of the stick because I thought they'd be selling us food and not, as it turned out, giving it away for free but still - I was game.
Our only problem was deciding whether we should go to the Merchant Fish Bar before or after the event. Miss Erin's tastes in food would run to the traditional. It was she decided we should go to the Fair first. Get it out of the way so to speak before we got down to the serious business of cod in crispy batter. Ach sure - we were hardly in the door before we found that every starvo in Ballymena was in for the free scoff and we had a long queue in front of us. I wasn't that hungry when we started queuing but by the time we were nearing the front of it I was starting to feel pretty peckish. It was at this point that an attractive woman wearing a tweed necktie appeared and assured us that she was very sorry for our long wait, but we weren't to worry as there was lots of food and they were not going to run out, definitely not going to run out. As it turned out this was close to a lie and she was trying to prevent a riot.
Eventually we got to the front of that queue and were allowed into a room where we got to join the end of another line. This room was kitted out with an invigorating wind machine set to hurricane and, with eyes closed, it would have been easy to imagine ourselves standing atop Slemish. At last we got to the room with the food and joined our third and last queue. And got food. I decided not to be greedy and only had Spanish paella, Romanian cheese and salad and something red and beany and some delicious Indian rice and a wonderful, fragrant vegetarian curry. Miss Erin put food on her plate because I said she had to but she only nibbled on some paella rice and a bit of delicious Indian chicken but at least she passed herself. I knew she was thinking about the Merchant Fish Bar.
We met Zoe, Dave and Martha coming as we were leaving with our heaped plates and we relieved them of Miss Martha who was sleeping soundly. Erin said everyone would be so jealous to see us coming out as they only got food and we got food and a baby. Bert arrived late and missed out on the mussels and the Polish sausage and the Chinese food but I don't know what he was complaining about as he'd already eaten half a takeaway Chinese with his Aunt Lizzie.

My best bit was when Martha woke up, caught sight of her loving Granny and rewarded loving Granny with a huge grin. The music, particularly a wonderful female vocalist and drummer from (I think) Uganda, was good but could have been far better if the acoustics had been properly thought out. Not the musicians' fault as it seems they were shunted from a room to a roofless gallery. 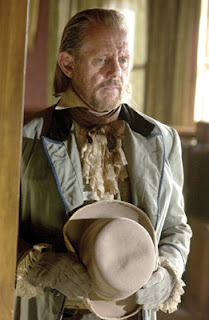 Home by half-eight to toast & jam for Miss Erin and wine and Deadwood for Nellybert. Bert really does need to get his hair cut for he is starting to look like EB Farnum. After Deadwood we watched a bit of The Secret Garden. Bert said,

What's it about? Suppose it's something girly?

Not atall. It's a 19th century psychosexual drama featuring Sigmund Freud. Based on a book by Frances Hodgson Burnett.

Oh. Is it OK for Erin to watch?

I let Erin into the secret and we all settled down to watch.

He watched avidly for five minutes then caught sight of the DVD cover and disgustedly showed his disapproval by dealing himself a hand of patience.

The creation of cake is postponed until tomorrow.
Posted by Nelly at 12:10 am 2 comments:

A young friend has just invited herself down for the weekend. This is very pleasing. Not only is Miss Erin a delightful person to keep company with, we are also pleased that someone so young and vibrant should wish to spend part of her precious weekend with Nellybert. There will be wine and cake. I shall drink the wine and Erin shall construct cake.

This has not been the only honour bestowed upon me in recent days. I had this published at The Bilerico Project thanks to the encouragement of that rascally confessor Father Tony.

For I do occasionally stop thinking about cake and wine. And now a bath and after that an episode of Deadwood.
Posted by Nelly at 9:50 pm 2 comments:

You know you've been watching too much 'Deadwood' when your husband returns from the village and says,

That nest of celestial cocksuckahs are on their fucking holidays.

His meaning?
The Chinese takeaway was closed.
Posted by Nelly at 3:47 pm 2 comments:

Email ThisBlogThis!Share to TwitterShare to FacebookShare to Pinterest
Labels: Deadwood, not PC, swearing

The Year of the Wedding

I finally booked our plane tickets for Katy and Mark's wedding in June. Now all I've got to do is find my Mother of the Bride outfit. 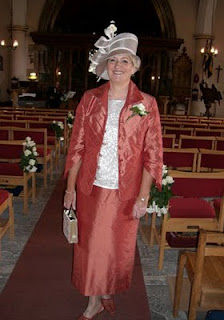 But not this one. It's far too shiny and rather too Grandmother of the Bride for my liking. And the hat is perfectly hideous. 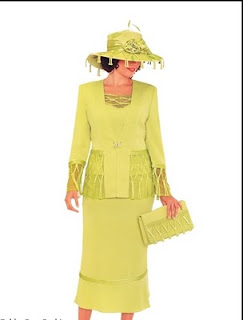 And Katy says I'm not allowed to wear a hat. But how can I be mother of the bride without a hat? Maybe a fascinator would be the thing? Maybe not. I'm fascinating enough without wearing one of those silly articles on my head. Anyway I've a head like a turnip. Best not to draw attention to it. 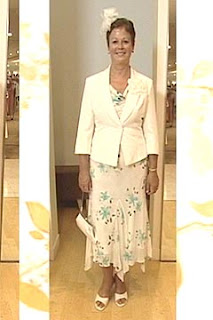 This is far too pale and not a bit interesting. The head dress is vile beyond belief. 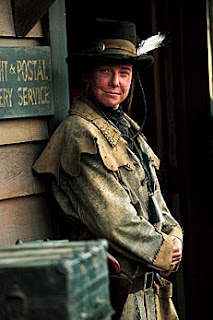 Now this is a hat I could live with. Totally my dream outfit. And it won't show the dirt. Wedding here I come.
Posted by Nelly at 11:26 pm 9 comments:

Six years today since Paddy was rescued from the shelter.

It's also six years and three days since I quit smoking. How time does fly.

And for those of you to whom such things matter -

Where should I bury it?

195. Where should I bury it?, originally uploaded by tom gauld.

A little gardening advice is always useful at this time of year.

Matty: Are you wearing those green boots for St Patrick's Day?
Nelly: No, just wearing them because I am... but I'm not sure if I actually like them.
Matty: They're nice wee boots. I'd rather have you in flat boots. You can't walk right in high boots. You're all staggery.
Nelly: Thanks Mum.
Matty: And I'd rather have that style than laced boots. Are they hard to get on?
Nelly: The left one is really easy to get on but the right one's a bugger. Look.
Demonstrates.
Matty: You know plenty of people have one foot bigger than the other. That must be what it is with you. What size are they?
Nelly: They're size 6. Let me check. (turns sole of right boot over) Aye. 39. That's size 6. (pulls off left boot and turns over) Size 40. That's 6 and a half. Oh! That explains it then.
Matty: You should take them back.
Nelly: Nah. I'd look like a complete eedjit. I've worn them quite a few times now. Sure as long as I don't keep my feet side by side no-one will notice.
<><><><><>
So, if the person who bought a pair of green pull-on ankle boots in Ballymena's TK Maxx, right boot size 40 and left boot size 39, would like to get in touch, maybe we can work something out.
Posted by Nelly at 4:51 pm 5 comments:

Nelly is on Martha-sitting duties. Not baby Martha but Martha senior. The reason being she had to get injections in both her thumbs to help with her arthritis but the injections have left her unable to use her hands atall for the next couple of days. Nelly shall return tomorrow to regale us with some little anecdotes.

hootchinhannah
Posted by Nelly at 2:56 pm No comments:

The girls, originally uploaded by triciamorimori.

Photograph taken by Tricia on a sunny afternoon.

Location is Woodgreen in Kells. The photograph would have been taken sometime in the late 1980s.

Bert and I are inundated with DVDs at the moment. I made a small complaint to Lovefilm about the sequencing of Our Mutual Friend and they responded with profuse apologies and extras. I said to Bert,

So tonight we'll watch two episodes of Little Dorrit, then tomorrow we'll watch Chinatown, then back to Deadwood on Monday night. Oh no, wait a bit, we've got another Little Dorrit haven't we?

Sure we've got 18 million fucking Little Dorrits to watch.

He actually likes BBC Dickens serialisations although he will say things like,

Who wrote the novel anyway? Was it Shakespeare or Thomas Hardy?

Is it any wonder that he avoids the brown questions in Trivial Pursuit?
Posted by Nelly at 8:08 pm 2 comments:

That was a mixed bag of a weekend that was...

I successfully hypnotised Jazzer (salt category) but just like Cinderella all the good effects wore off at midnight and on Sunday my own efforts at self-hypnosis were undone by a giant tube of pink smarties.

I told myself when I bought them that I was for keeping them in my baking cupboard for decorating fairy cakes. Damn you, pink smarties!

Do you know you're getting old when only one of your Facebook friends is called Aaron?
Posted by Nelly at 11:40 am 7 comments: