Bonnie lived with us  for six years and eight months. I picked her up straying on the Dreen Road and she ended up staying with us. I contacted the local dog warden but no one was looking for a German Shepherd dog. I never did find out who her original keepers were despite putting posters all over the village. This man telephoned, said he preferred to remain anonymous. He said he knew where the dog had been living, said her owner was seriously ill in hospital and unlikely to recover. He said that this man had two dogs, a collie and the German Shepherd, that they were neglected and chained up all the time. He said that the German shepherd had escaped because she was starving and that he had fed her but she had got away from him. He asked me to try and get the dog a good home because she had a gentle, sweet nature. Then a woman called to the house. She knew something too. She pointed out how underweight Bonnie was and noticed that there was no hair under the chin from where her collar had chafed and rubbed her. She told me that she had a friend who worked as a postman, he knew the house where the dogs were kept and how he would have loved to rescue both of them.

So it was down to us. A week after I reported finding her I bought a dog licence for £10 and under the laws of this country she became my dog. We called her Bonnie. By this time we had bathed her for she had come to us reeking and matted with filth. She found that strange. What puzzled her more was being carefully dried and wrapped in a blanket and placed at the foot of my bed. She looked at me as if she could hardly believe it. Funny though, how quickly she got used to it.

She slept at the foot of my bed until about six months ago when she stopped being able to get down the stairs in the morning. A few times she had slipped and fallen the last few steps and it frightened her. She seemed happy enough to sleep on a sofa as long as she got her night time dog biscuit. On Sunday last as I prepared to go to bed she followed me. She was determined to go upstairs and climbed the steps, slowly, stiffly and went straight to my room. I lifted her on to the bed, gave her a bedtime treat, scratched her ears and cuddled her and we both fell happily to sleep. The next morning I helped her off the bed and she lost her footing. She managed to steady herself and I walked backwards in front of her as she descended the stairs.  I helped her down the last few steps and she didn't fall. We had the usual Monday. Zoe and family came to work in their vegetable garden and Bonnie followed us around. Later  that evening Rod and Tracey came by. Rod was bearing dog treats as always and Bonnie was well to the front of the queue for her share. That night she was happy to sleep downstairs.

The next morning I left the house early as I had planned to take Miss Evie to the seaside. I left Bonnie on the sofa with the door to the outside open so she could go to the toilet when it suited her. Something happened to her between Monday night and Tuesday evening. At supper time she couldn't stand and her breathing was laboured. She didn't want to eat. Throughout the night she became weaker and her breathing was getting more difficult. We called our vet first thing this morning and requested a home visit. We knew we were having her put to sleep. The vet came at half eleven and Bonnie was placed to rest in the garden just before midday.

My big fear for Bonnie was that her hindquarters would give up while she still had some zest for life. That didn't happen. We were blessed that her final illness was swift and that her suffering was short. Going to miss her. Bonzerooni. My pet.

And that crazy title? That was my pet name for her. I know it's completely loony but if you are like me, a fool for dogs, you'll forgive me.


And I still wonder what became of the collie from all those years ago. 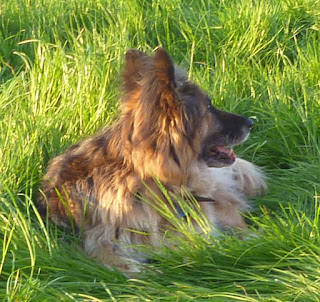 I read this somewhere - 'Forget dusting, go outside, plant a seed.'


I took it to heart. The forgetting to dust was the easy part. I don't even feel bad about that any more, Instead I feel guilty if I don't get round to planting that seed. This month I should have sown, according to the following handy list,

And so far, with just one week of June left, I've only managed to sow fennel, radishes, cabbage, lettuce, turnips and peas. At least, with dusting, there are no time restrictions. And I don't even know what amaranth is!
Posted by Nelly at 11:11 pm 4 comments:

In the dark of the night when the cramping in my right leg keeps me awake I find myself imagining all kind of terrible outcomes. I'm an optimistic old stick when the sun shines but the wee small hours are quite  a different matter. The best I can wish for is a blood clot, hope I can get to the hospital before I take a stroke. The worst is, of course, cancer. Morning comes, I hop out of bed, gingerly put my foot to the floor and all is well. I can practically hop, skip and dance. The day wears on, the knee starts to ache, I start to limp and by evening it's the hip and by bedtime shin, ankle  and thigh muscles are gowpin.* Paracetamol (and sometimes wine) takes care of the pain but the cramps do not ease.

Eventually, more than six weeks after the initial injury, I saw the doctor. She examined it thoroughly and pronounced it tendonitis. Says she suffers from it herself because she likes to run. Said I ought to rest more, said she ought to rest a bit more herself. We agreed it wasn't easy. I got Ibufren, a stomach pill to help me take Ibufren and a lotion. The latter two are medicines that Pearlie takes. Now we are practically twins! Twin crocks.

But I'm happier now. No more night time hypochondria. I just have to take a bit more care of myself to be able to get into this tree house. It's not quite finished yet but that isn't stopping us from picking the furniture. 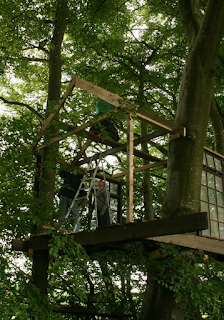 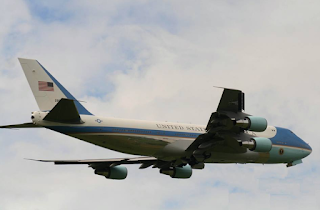 And just to prove that I am actually aware of what goes on outside Cully here is a photograph of President Obama leaving Northern Ireland, taken today by my friend Brian. 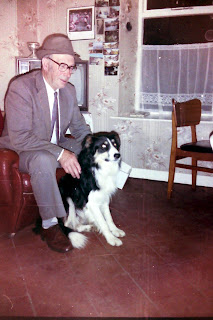 Bert's Dad, Johnny with Prince. Johnny's anniversary was on 2nd June. He died in 1997. Sixteen years gone. He was the kindest, sweetest man and I wish we could have had him for longer. 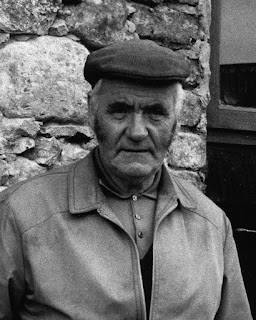 My father, Seamus, was a couple of months older than Johnny. They were born in 1919. Daddy got eight more years. He died on the 3rd June, 2005 making his anniversary the day after Bert's father's. They were two fine men and we miss them every day.

Music night at Nellybert's and scones were served again. And once again Brendan asked for the recipe. The first time I wrote it down for him. Then I sent it in an an email. This time I'm going to blog it and link it to Facebook.

It's a cross between my mother's recipe and  a Nigella Lawson recipe. This is it. I don't know if soda bread flour is sold outside of Ireland. Probably not. Sorry about that. 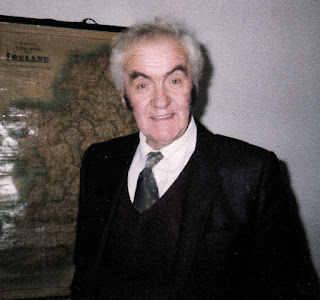 Daddy in his Sunday best. He had probably called to my house to bring the girls and I to Mass. For sure I'd never have gone if he hadn't made the effort to pick us up. Afterwards we would usually go out to Drumkeeran for Sunday lunch.

I'd say, in the photograph, that he was probably only a little bit older than I am now.

I still have that old map but I don't have him. He is eight years gone today. 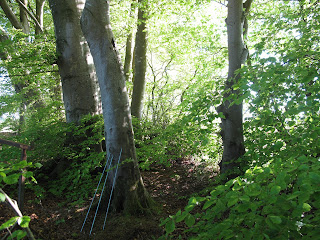 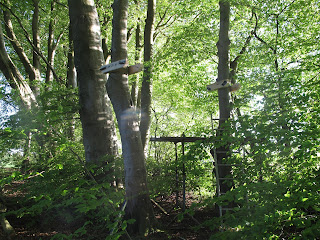 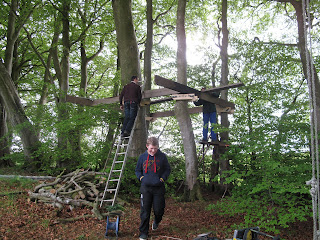 It is kind of awesome. I have always wanted a tree house but lacked the trees. Then we got this place with mature beeches galore. Then we got ourselves a new friend who loves tree houses, who has the skills, the enthusiasm, the tools and the encouragement to make this dream a reality. So what if I'm nearly sixty! I'm beginning to realise that the good things that happen when we are older are what we appreciate the most. This knee, this hip is getting better for I am going to spend some time in the trees. Lucky, lucky me.
Posted by Nelly at 12:01 am 4 comments: