The weather last few days has been very fine for February but I have not been able to enjoy it as I am, as they say in Norn Iron, 'dosed with the coul.'

I have noticed since I started hanging out with toddlers that I get a cold about four times a year. It used to be only about once or twice a year. Small children are germy little beasts.

Another thing I will not be able to enjoy is a quiet house for Bert is away and there is just me, Pearlie, the two cats, three dogs, 7 chickens and 5 calves. Unfortunately I am responsible for feeding all these creatures. Although the pigs, Lily and Rusty are quite capable of helping themselves. This is to be avoided and I have asked Bert to put all the pig and calf feed in a safe place. He put it in a trailer with sides down, right at the edge, good and handy for a tall pig standing on hind legs. Luckily I got to it before they did so the only way they're getting into that trailer is if they sprout wings and fly.

In fact, must go and see if they have broke out and are rampaging through the yard.

I have very high hopes that I will be feeling better tomorrow.

Postscript. Darn pigs were nowhere to be seen but they had left a trail of tumblings behind them. Pigs are rough. I eventually found them in Bert's workshop where they had broken open a big bag of peanuts intended for the birds. Perhaps they thought eating bird food would help them to fly.
Posted by Nelly at 5:28 pm 8 comments:


Nellybert has dog visitors almost every day. They are nearly as many as our human visitors. Today we had Lucy, accompanied by Clint and Rex, accompanied by Swisser. Lucy is a very good visitor. She farms and does not be in the house much. Of course, like all farmers. when she does come indoors she brings half a yard of filth and dung in with her. Judy does not like her much. Judy was very annoyed to see Lucy riding in the cab of the tractor with Clint. She must have thought Lucy had shocking airs about herself. To console Judy I had to take her out in the van when I went to buy my wine ingredients and my Guardian.

Rex, our other dog visitor, is a sister of Jess and she greeted him as she greets all her litter mates, first by growling and snarling viciously, then by having around thirty minutes of fairly good-natured tussling and tumbling. Rex is a nice dog and much bigger than Jess but he has a sweeter temperament. Of course he shit in the kitchen and his mistress was very cross indeed. I tried to explain to Swisser that other people's houses are 'outside' to four month old dogs and she shouldn't berate him. I also told her that I'd far rather put up with the dog's poop as listen to her shrieking at him. I think she took it in good part.
Posted by Nelly at 11:41 pm 2 comments:

Email ThisBlogThis!Share to TwitterShare to FacebookShare to Pinterest
Labels: dogs

What To Do When The Muse Departs

Over a week now since I committed a word to The Garden and that was merely a link to another person's blog post. That other person being my sister and that blog post being so damn good
that my poor muse was utterly devastated, became a dessicated leaf and blew away in the breeze.

But I eventually caught it, gathered it up, watered it with tears of salt and am currently trying to breathe life back into it. So while the muse fights for its life in intensive care I shall tell you what I've been doing this past week.

I ate a burger. It was sourced from my local butcher who informed me that sales of burgers have risen sharply since the tales of Tesco and Findus and the rest serving up Old Dobbin have become news. What do I think of this? I think it a disgrace and not because I object to eating horse (although I prefer not to) but because they cheat us and because welfare standards are not being met in these dodgy abattoirs. A few years ago, when things were going well and everyone felt rich because their home was worth close to half a million quid, the fields were full of horses. Now, with the price of feed sky-high, there are less of them. They had to go somewhere.

I finished watching Game of Thrones and miss it a lot. I watched the last two episodes back to back six days ago and what with the thrills and the tension, not to mention sitting in the same position (tensed up to the max) for two hours I've got a sore hip that keeps me awake most every night unless I load up on paracetamol, hot water bottles and wine.

I resisted Game of Thrones for ages even though lots of it was filmed around these parts - Ballintoy, Murlough Bay, The Dark Hedges, Shane's Castle and Tollymore. There were also a few people I know playing extras in crowd scenes. It was exciting to see my friend Danny trading vegetables with another extra in the foreground of a scene supposedly set in the Iron Islands. 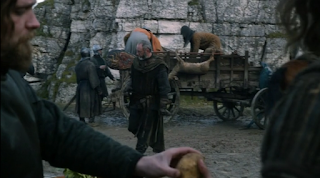 I also finished listening to my latest audio book, The Unbearable Lightness of Being. It was dense and far from light and I had to listen to parts of it several times but what a book! I'll carry it with me for ever. Not literally of course because I'm not sure I even have a copy of it. My favourite character? Karenin, Without a doubt. Although I didn't like him as much in Anna Karenina. And now I have started Madame Bovary. I will, I will be well-read!

And Nellybert acquired a time-share in Donegal. How exciting is that? I told Miss Martha and Miss Evie's folks about it today and we are all very excited.

And Ben Reed is spending mid-term break with us. Quite honestly he is The. Best. Boy. Who. Ever. Lived. I might have to do a blog post on him sometime.

There is also stuff about Pearlie but it is far too dreary and awful and I don't want to talk about it. Yet.
Posted by Nelly at 10:30 pm 1 comment:

My sister wrote this. It is worth sharing.
Posted by Nelly at 2:07 pm 7 comments:

Granny. I want to put my smock on and paint.

OK. Let's go upstairs and get the paints.


She spotted some acrylic paint.

Those are for big people. You can have the ones you used last time.

Well. You'll have to wear an apron as well as your smock because you wouldn't want to get paint on the new pinafore your mummy made you.


I squirted out a blob of every colour and I showed her how to mix them to make different colours. Red and white for pink, red and yellow for orange, blue and red for purple. She was very absorbed. But before long she was mixing too many colours together and I explained that she would end up with a sludgy grey or brown colour. But she was enjoying herself and I thought it best to let her learn from experience. While she was mixing her colours I  left the kitchen to get something something from the freezer. Evie and I became rather engrossed out there and I started looking for rhubarb to make another batch of wine. We were less than five minutes. When I went back to the kitchen I found that Miss Martha had created a dark, dark colour and.... 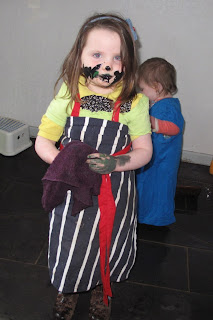 Big girls! You couldn't take your eyes off them for a minute.
Posted by Nelly at 10:14 pm 5 comments: 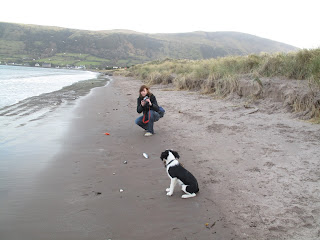 Hannah and I took Judy and Jess the puppy to Waterfoot. It was Jess' first trip to the coast and she liked it a lot. The only thing is, she was not happy to share her beach. She seemed to believe that it belonged only to Nelly and all who belong to her. It will not do that she has a growl that would not shame a fully grown German shepherd. This is behaviour we will have to try to modify.

Another thing Jess liked about her beach was the number of dead fish lying around. there were dozens of them and she was happy to eat them as they were. We had to prevent her as we didn't know where they had come from. Later on an old chap told us that there had been a fishing event the previous day and the small ones were thrown back. Jess growled at this poor old fellow in a very nasty and threatening manner. She did not like the cut of his jib.

It must be strange for a small dog to be taken to the seaside and find that someone has arranged an 'all you can eat' buffet, and then not be allowed to partake of it. 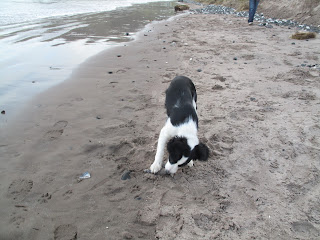