I have great faith in the prayer the Memorare ever since it was taught to me by Mrs Magee at Tannaghmore  Primary School just before I went in to sit my 11+. Which exam I passed not that it ever did me much good. So that makes it around half a century I've been saying the prayer in my anxious times.

I've been saying it a lot this week for I have a special person who needs to find a bit of strength to keep her going. As always, my prayer is for the best possible outcome even if that outcome is not the most obvious one. Our Lady knows best.

Then it occurred to me that there might be another mother praying for her child and that she might be hoping for an outcome very different from mine. Still. Not to fret. Our Lady knows best.
Posted by Nelly at 9:15 pm No comments:

I spent the greatest part of my life without allergies. Then in July 2011 I was stung by a honeybee and took a severe reaction to it. And that was that. Ever since I have taken the greatest care to avoid stings and I always know where my EpiPen is. Two years later and I never had another allergic reaction to anything. Until I went to Vancouver.

At first I didn't realise I was reacting to allergens but after a few days a pattern emerged. It seemed to be triggered by exposure to trees. It wasn't a severe reaction - just itchy hives all over any exposed skin. They faded within twenty minutes of getting indoors or into a vehicle.  I consulted a pharmacist and bought antihistamine tablets and all seemed to be well. I expected it all to go away on my return home.

Except it didn't. Any exposure to trees, wind or rain and I'm all blotchy and itchy with hives. My recent trip to Fanad really brought it to a head. I got wet a few times and any skin that came in contact with damp clothes was itchy and covered in hives. My face was a sight and so were my hands. Guess it is time to visit the GP.

Happy birthday London Sister!
Posted by Nelly at 10:42 am 2 comments:

Today was a good day. And when I'm cooking on a good day it seems that everything turns out well. We had toad-in-the-hole and roasted squash with apple crumble and custard for afters. Simple and delicious. I made the batter using a recipe from Hugh Fearnley-Whittingstall. Lots of eggs and 1 part water to two parts milk. It is much lighter batter than one made with all milk. The only problem was I didn't have enough room in the oven for everything but Zoe came up with the idea of separating the squash into three loaf tins so we sort of jigsaw-ed everything in.

And nothing got burned.

I enjoy cooking for the family but sometimes I try to go all gourmet and get stressed and have disasters so my new plan is (a) to have a plan; (b) keep it simple.

And when it is simple there is more time for cuddles, fun and giggles with the grandchildren. What could be nicer?
Posted by Nelly at 9:57 pm No comments:

A Cave Near Marseille

It is coming close to Halloween so perhaps this is a good time to share a scary tale that also happens to be true.

It was sometime in the early eighties and Bert was coming to the end of a long, leisurely trip around Europe. His funds were running low and his plan was that he would wend his way homewards but, before doing that, he wanted to meet up with an old friend from Ballymena who was teaching English in Marseille. But when he called at her apartment he was told that she was away for a few days. He had around three days to kill before Rosie would return and rather than leave without seeing her he decided to wait it out. Because of his cash shortage he couldn't afford to stay in the city. Being an adaptable sort of chap he decided to travel just outside Marseille. He caught a bus to a likely looking area and on exploring found himself a nice dry cave. It was wide enough to accommodate him lying down, deep enough to give some protection from inclement weather but not high enough to stand up in. It was ideal. He tramped back down to civilisation, bought bread, cheese, fruit and wine and settled down for the night.

The wine did its work and Bert was soon fast asleep until he was startled awake at some pre-dawn hour. The hairs on the back of his neck were standing on end and he felt quite alarmed. There was something tugging at his sleeping bag. He shone his torch around the cave but there was nothing to be seen. He decided it must be the wind catching it or a animal tugging on it. He settled down and went back to sleep. But not before checking his watch. It was nearly 4 am.

The next day he put the experience out of his mind. It was probably a dream. He spent the day exploring the countryside before going into town for more supplies. That night the wine did its customary work and he fell asleep easily. Until he wakened, hair prickling on his scalp and neck. There was that tugging at his sleeping bag, more insistent this time. Terrified he pulled the sleeping bag over his face and lay shivering until dawn. He decided that this would definitely be his last night in the cave.

The third day brought torrential rain. He mooched around all day telling himself that this nightly disturbance was all in his mind. He decided to give it one more night. After all, he'd see Rosie the next day. There was the prospect of company, a bed and a hot meal and just one more night to get through. What harm would a little ruffling or tugging at his sleeping bag do?

At the usual time, the hour before the dawn, Bert felt the familiar prickling at the back of his neck. He drew the sleeping bag right over his head. Then, horrified, felt himself being picked up as if two sets of strong arms had each taken a corner of his sleeping bag . He felt himself being flung into the far reaches of the cave. And there he cowered, trembling and sweating until the first glimmer of light entered the cave. He gathered up his belongings and left. An hour later he was sitting in a café on the outskirts of town surrounded by people on their way to work. He drank coffee and smoked. And thought, did that really happen?

All was forgotten when he met up with Rosie later. That night he slept on a comfortable couch in a warm apartment, all terrors behind him. But not entirely forgotten, for this strange experience has stayed with Bert all his life. It was one of the first stories he ever shared with me. And now and again it is spoken of, whenever the subject of ghosts, ghouls or hauntings comes up in conversation.
Posted by Nelly at 9:58 pm 5 comments: 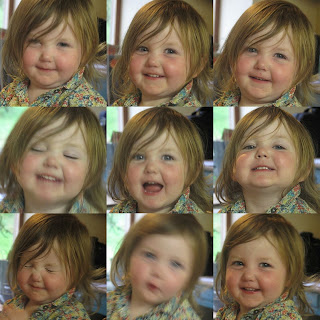 Miss Evie comes to me with her hair in bows and clips and looking quite the young lady. As the day progresses her pretty hair ornaments are yanked out and she looks rather dishevelled. This does not trouble her overmuch as she is not as concerned about her appearance as her big sister is.

Sometimes Granny tries to remedy matters but she is not as nifty at fixing hair as Evie's parents. I don't think Evie cares much for my efforts either! 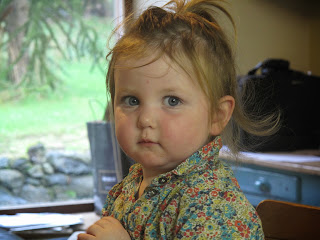 I was happy there for a long time, the longest time ever since those long ago summer holidays of my primary school days. I put it down to the contentment that comes with increasing maturity and some needful adjustments to my thinking.

Then my mood started to flag. I was tired all the time. My legs hurt a lot. Reckon I've got a lurgy. I googled all my symptoms and it turns out I've got Blogger's Block. I blame American TV.

Because when one has Breaking Bad, Boardwalk Empire and Homeland to watch it does rather eat into one's leisure time.

Then there is micro-managing the household chores and caring too much about how the towels are folded. That is a very foolish way to spend those precious moments.

What I need to do is micro-manage my daily schedule. Any advice would be greatly appreciated and I may need to make a spreadsheet. Now I must go because there is another episode of Homeland to watch where Carrie must deal with the aftermath of having being shafted by Saul once more. She had already been shafted on her stairs but at least he ( a Brodie lookalike lite) had the common decency not to stay the night.
Posted by Nelly at 8:08 pm No comments:

It was my chance to get away last week so now it is Bert's turn. He left this afternoon, on a grey, miserable Autumn day for Fanad, armed with two buckets of woodstain and a selection of brushes to tackle the decking at the caravan. His accomplices are, two social workers, brothers who love nothing better than a bit of banter and some nice relaxing manual work to do. The weather in Donegal was bright and sunny and perfect for the task in hand.

Meanwhile I had my own social work stuff going on as it was time for Pearlie's six-monthly review. We are so lucky right now. Pearlie's care team are first-class, her social worker is excellent and the nursing team so very conscientious. I don't take any of it for granted. I know that we are fortunate to live in a society where all this elder care is available and, even better, free.

Even so, it can be tough when Bert isn't here. Especially when his time away coincides with grandchild day. I have the girls tomorrow and have no one to help me out.

So when Tracey phoned me up, knowing I was husbandless and carless, to ask me if there was anything I needed I at first said,


When my darlings go home and Pearlie has her supper and the pigs, dogs and chickens are sorted out, I'll be pouring a stiff one, putting my feet up and will watch yet another episode of Boardwalk Empire. Roll on Thursday and gin o'clock!
Posted by Nelly at 9:20 pm 2 comments: