Bert was getting ready to make a delivery yesterday morning. He was wearing a threadbare shirt, filthy cords turned up at the ankle and grubby Birkenstocks. “You’re not going to walk into a garden centre looking like that, are you?” I yapped. “These are my working clothes,” says he. “For God’s sake,” says “People will think you’re a tramp! At least change your trousers.” “But I have no trousers,” says he. “Your arse!” says “Your drawers and wardrobes are full of trousers. Wait there till I get you a pair.” I brought him down a pair of and, with enough to do, he changed into them. “You can get changed back into your filthy old trousers when you get back.” I said. And so he did.

Later that evening he had the job of taking Aunt Lizzie back to Kells. After a day in the tunnels and the vegetable patch he was even dirtier than before. “Do I have to change my trousers?” he enquired. “Ach no. Sure you’ll do. You’ll only be going in somewhere to buy wine and what odds if you’re bogging. They’ll not know you and they’ll just think you’re a crazy eccentric.”

He brought home the wine. We relaxed in the cool of the evening.

”Aye. And I ran into Sam Greer. He was asking if you were still working at the place down the road. And I could see that the girl at the checkout was pricking up her ears.”

”Oh dear God! And you standing there like a dirty hobo!”

”I’m the only woman works there! They’ll connect me with you!”

“I did. And that’s not the worst of it. I looked down and weren’t my fly buttons open and my pubes sticking out!” 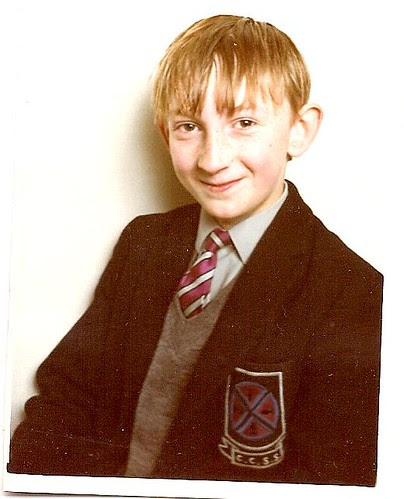 Bert 11 and a half, originally uploaded by NellyMoser.
Posted by Nelly at 9:33 am 10 comments: 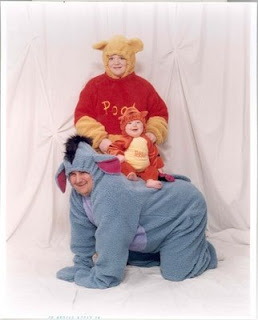 This unusual family portrait was found at awkwardfamilyphotos.com

I wonder if Mommy and Daddy wore those costumes when baby was conceived. Going by the look on Daddy's face, I shouldn't be at all surprised if he has the furry kink.
Posted by Nelly at 10:35 pm 3 comments:

Email ThisBlogThis!Share to TwitterShare to FacebookShare to Pinterest
Labels: weird

Last night Bert made us a delicious pot of leek and potato soup. We were all delighted with it. It was a beautiful shade of pale green and the texture was velvety smooth. It could maybe have done with a smidgen more salt but otherwise the flavour was sublime. He gave a little bowl of it to Pearlie. He did not expect her to like it very much but he thought it might do her a bit of good.

After a while he went to her room to see if she had enjoyed her soup. Immediately she saw him her face twisted into its usual girn. She said,

“Huh! I didnae think much o’ it! Dinnae be giving me any more of that oul rubbitch!”

Such a sweet old lady. And she has such a charming way with her. Truly it is a pleasure and a privilege to look after her. 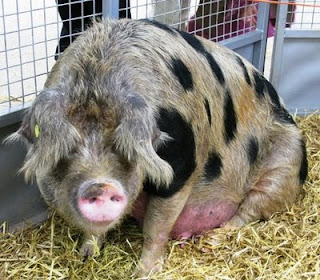 Please God I am not making a fool of myself and that title actually does translate into the 'Royal Welsh Smallholder and Garden Festival', which is where Bert, Clint and myself spent last weekend. It was my first visit ever to Wales and I was very impressed with the country. It may be wet but it is beautiful and the people are lovely.

Which is not what we'd been led to expect from Clint. He regaled us all the way over with stories of the sheer horridness of the Welsh people. His dislike of the Welsh stemmed from his experiences driving tankers of Irish milk to a cheese factory in Anglesey. What did the Welsh do to him that drove him to take umbrage with an entire country you may ask? And I did. It appears that a canteen lady in the Welsh cheese factory in Anglesey wouldn't give him a cup of tea saying curtly that the canteen was closed and that he could get his tea from the machine. Meanwhile there was a group of employees sitting at a table nursing hot steaming cups of proper tea and they were all glaring at him. What did Clint do? I asked him this. It seems he told the canteen lady to stick her tea and then flounced out. Now there is an entire cheese factory in Anglesey that thinks Northern Irish people are perfectly hateful.

And did I mention the pigs? They were far and away my favourite part of the show.

While I was away I picked up a new Facebook friend. Her name is Mavis and she is a Berkshire pig. She's got a brother who lives and works here, in the Ministry, in the AI section. Tough job but somepig has got to do it.
Posted by Nelly at 10:17 pm 9 comments:

I have been asked by Tuesday Kid to compile a list of eight pointless things about myself. As I am going to Darkest Wales tomorrow I will comply. For I may be some time away. Don't wait up.
Posted by Nelly at 4:24 pm 8 comments:

Email ThisBlogThis!Share to TwitterShare to FacebookShare to Pinterest
Labels: meme

Here We Go Planting Nuts In May

I am now on my fourth LibriVox audio book. I've just finished 'A Tale of Two Cities' and am halfway through 'Heart of Darkness'. I've also been working in the garden, which is a sad neglected place where scutch grass and buttercups have been making a takeover bid.
I like weeding and I like listening to books while I'm doing it. Unfortunately for Bert, who works on the strawberry bed while I tear at nettles and scutch, my audio book makes me antisocial. I faintly hear him speaking and I shout,

I can't talk to you now! They're storming the Bastille!
He tries again a little later and I roar,
Give me a minute! Miss Pross and Madame Defarge are fighting to the death!

Yesterday we spent the dusky hour planting hazel trees in the wood. Bonnie, Paddy and Holly de Cat accompanied us. The hedge birds were frantically busy, as they always are at that time of the evening, the baby long-eared owls in the Scotch pine were starting their nightly tumult for food, the back lane was heavy with the smell of May and Blossom and cow dung. I carried a spade and Bert carried a big bundle of indifferent looking hazel whips, that any sensible person would have thrown over the hedge.
We began the planting. I said,

Those will never grow. There's no 'R' in the month.
Och! They might grow.
I never saw the like of you for being at some fool enterprise that'll never make you a penny.
Sure what odds about money?
Suppose you're right. I mean, how big a headstone will you need?
True.
I love these long evenings when we can do all this crazy outside stuff.
Me too.
And I love you too.
I know.

And this is the fellow Bert was conversing with. 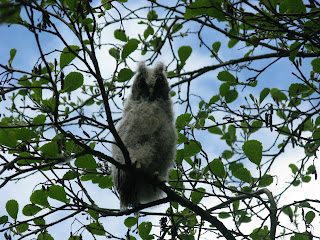 The Blogmeet Of Doom

Firstly, I have to say that the title of this post is a just a leetle misleading, as last night's coffee & shortbread-fuelled blogmeet was a very pleasant occasion indeed.
After I had established, although not entirely to my satisfaction, the romantic status of all young persons present, we proceeded to discuss recent murders, slaughters and massacres and as a result convinced young Hails that she was very well off out of it.
Then we moved on to the amusing stuff, tales of global warming, bluebells, pilgrimages, naked men and religion. The evening flew by.
And speaking of flying - Ed never mentioned helicopters once! Talk about hiding your light under a bucket.

Thanks to Grannymar, S.E.V.E.N., the aforementioned Ed and Hails for a great night. And thanks to Hannah for not mortifying me at all with tales of my shortcomings.
Posted by Nelly at 4:42 pm 7 comments:

Crazy Lady Made Me Laugh

What with one thing and another I've been feeling a tad low recently. Murder trials, chicken massacres and nasty weather do nothing for my spirits. Then I saw this and realised I have something to be glad about. I am not Madonna.
Posted by Nelly at 8:21 pm 8 comments:

All our laying chickens are gone. And Corky is gone. Bert forgot to hit the on-switch on the electric fencer.
The fox only needs one window of opportunity.
Hannah was the first to see Foxy crossing the yard with a still-flapping chicken in her mouth. That is one encounter with nature we'd prefer not to see.
Posted by Nelly at 12:29 pm 7 comments:

There was Geoff's funeral to go to. It was a such a beautiful service but terribly sad. Afterwards I went to visit Matty but couldn't stay long as Bert was at his Bee-Keeping Course and Pearlie and Lizzie were on their own. I rushed back half expecting to find Lizzie lying in a heap in the hearth and Pearlie unable to lift a finger to help her. And there were Hannah and Dirtbird who'd been at home all the time. I'd not heard them creeping in the previous night and had I realised that there was a younger presence in the house I might have stayed longer with my old bird.

Bert arrived home at around six to tell me the news that we were entertaining the Banjos. Everyone who knows me is aware that I just love having these things sprung upon me. But still, that's the price I must pay for not using my mobile phone.

Next day, while Marty, Bert and Ben went sailing model boats at Bridgend, Jazzer and I took Frank and Bonnie to the bluebell woods in the hope of catching a shot as amazing as this. Sadly Frank and Bonnie proved far less co-operative models than the charismatic, acrobatic Gracie.

Today Hannah woke up with Swine Flu and I went to the Pet Emporium to buy Bonnie a new squeaky toy as she and Paddy pulled her cracker in half. Then I did some house-cleaning and tidied my external hard drive and finished listening to Middlemarch.

And Pearlie is pissed with me because I spilled her Movicol over her emery boards and lost her stockings in the wash.

Tomorrow I return to work. Sigh.
Posted by Nelly at 9:32 pm 4 comments:

I've Got The Bug

No. Not swine flu TG. Thanks to the Australian cousin (third) I've got the genealogy bug and have decided, as far as I can, to log all descendants of my maternal grandfather of which there are hundreds and hundreds. This has involved a fair bit of cyberstalking. I've discovered that the Bebo crowd (dem them) are far more likely to hit the privacy button these days. Wise move. You never know what demented aunt or second cousin, once removed might be spying on you Caoimhe, or Orlaith, or Trish!

Found this heartening news on Rate Your Teacher on my first cousin, the Head Teacher of a local school,

'This teacher is a total legend'