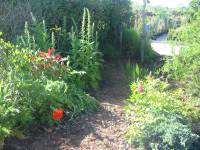 Taken a couple of months ago just after I'd weeded. I'd be mortified for y'all to see it now. Waist high weeds!

Email ThisBlogThis!Share to TwitterShare to FacebookShare to Pinterest
Labels: garden

This tomato is ready for action!

Email ThisBlogThis!Share to TwitterShare to FacebookShare to Pinterest
Labels: oddities

There is a wee cross man outside cutting the hedges. Why is he cross? Is it because it is teeming with rain and there are an awful lot of hedges? Perhaps. He will not be so crabbit when he trousers the big wad of cash he'll get when the job is finished. And I'll be able to see Slemish from the kitchen window when the hornbeam is lowered.
Posted by Nelly at 9:53 pm 2 comments:

Email ThisBlogThis!Share to TwitterShare to FacebookShare to Pinterest
Labels: garden

Daughter one is 30 today! She is on holiday in Cyprus so I won't see her. I wouldn't wish this dank Norn Iron day on her anyway. Happy birthday love, hope the sun is shining on you today.
Posted by Nelly at 8:36 am 2 comments:

Dying of boredom this afternoon. Too horrible to garden. Bored with housework, computers, everything. So we went to Whitepark Bay where only the hardiest go. The sea was rough and the dogs loved it. Afterwards went to Ballymena and got a curry + trimmings. I read in the paper this morning that stomachs are about the size of a 6 inch sausage but that they stretch to accommodate large meals or great feeds of drink. If stomachs get overstretched then the body does not know it is full resulting in overeating and fatness. So I read on to discover that it takes three weeks to get the stomach back to the six inch sausage. Method. Eat 12-16 mouthfuls per meal and chew thoroughly as this helps the brain to realise that the belly is full. My Indian meal was 20 mouthfuls and I ate them all. No wonder I am like a house side.

I got up early this morning which is good. I have been awake since six but forced myself to stay in bed until seven. Now on second cup of coffee and the computer. I have checked my email, one from daughter three, Celebdaq and Ebay and the other blogs I read. Nobody updated since yesterday!
When I smoked which is over 5 months ago I always got up early. I thought it was me wanting to do it but it was my craving for nicotine which pulled me from my slumbers. Ever since I've been trying to get the habit back because I like being up early. Gives me more time to waste.
Posted by Nelly at 4:07 pm No comments:

Email ThisBlogThis!Share to TwitterShare to FacebookShare to Pinterest
Labels: blogging

...is part-time because if it wasn't I'd go crazy because it is so demanding. I used to work full-time but it was too horrid and ate terribly into my week. Now I have more time to stroke the cat, pat the dogs, visit and attend to my aged parents, smell the roses and go on Ebay.

The reason my job is so demanding is because I am expected to do 15 hours work in a 7 hour period. Just like most other people I suppose. Then there is the clientele. All caring, supporting types need a clientele to care about and support. What I like about my clientele is that it varies quite a lot. The first criteria is that they must be homeless and the second that they must be female. Homelessness happens for all kinds of reasons but very often it is because the person cannot live independently in the community. So if they are not mad enough for Holywell or thick enough for Special Needs or sober enough for keeping 'a dacent house' then they might end up with us. We also get the care failures. These are mostly very young, spent most of their lives in care, blew their first few goes at living independently and come to us as a 'last resort' or as a punishment for screwing up.

I'm not much of a drinker but I've been known to have a go at it. Recently the wine has been flowing too frequently down my throat. So tonight I'm home alone while my dear one and his mates go visit friends in Antrim. And dear friends they are too but they do like to drink. So rather than sit like a lemon while all around me get legless I am staying at home to clean the fridge. It is now spotless so back to the blog.
Posted by Nelly at 4:59 am No comments:

The Garden in August

As I stated I have a keen interest in horticulture and a large garden. I spend many hours a year in the garden planting, weeding and deadheading. I also have a vegetable garden, an on site climber nursery, huge compost heaps and a field of barley. The view from my garden is spectacular as I can see Slemish and the Antrim Hills from it. Early on Sunday mornings I can see the Michelin factory spew huge clouds of toxic smoke into the atmosphere. In the sky we have swallows, buzzards, army copters and jet planes. The dogs hate things in the sky and bark ferociously at them especially copters & planes as these give satisfaction by running away. At this time of the year there are many things to be getting on with in the garden and a keen gardener could spend many fruitful hours tending their plot (if they could be bothered) so I will prioritise.
1. Remove huge overgrown clumps of grass from herbaceous borders.
2. Collect ripe seed, label and store carefully. Then lose, to be found in 2008 when moving house.
3. Gather up ripped Tesco paddling pool, lying since 12th of July and hootching with slugs. Put in bin. Squeal when slug falls on bare skin.
4. Cull vegetable plot big enough to feed family of 10 plus neighbours and only two of us. But they looked so pretty especially wigwam of runner beans.

I've been threatening to do this for some time now so while speaking to daughter one on the phone tonight I said "Tell me daughter, what shall I do?" She said "Go to Blogger." So I did and several moments later here I am writing my first post.

So shall I introduce myself? I am old enough to have three daughters all left home. I live in the country. I like flowers & dogs (among other things) I work in the 'caring professions' and I spend far too much time on computers.

Blogs are a recent thing with me. Daughter one has been doing it for a year and I've been pondering it for 6 months. Where it will take me I know not.
Posted by Nelly at 9:30 pm No comments: