Hannah and I flew to Stansted. Trains weren't running so had to get coach to Cambridge then train to King's Lynn. Did not get to Katy's until late. Baby James grown like gosling, still gorgeous and very smiley.

Went to Hunstanton. Fierce wind blowing off the North Sea. Hannah sad she left her woolly hat in Ballymena. We found a sheltered spot and ate delectable Cornish pasties. Later on went for walk in derelict part of Sculthorpe air base.

Went to Wells-next-the-Sea. Excellent second hand bookshop and we got to see the places where James' father played truant when he went to school there. Do hope that young James will pay more attention to his studies. Later on went for walk on Syderstone Common. 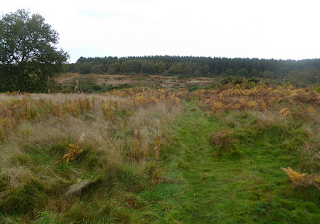 Went to King's Lynn. Left Hannah to railway station as she was off home again. Went shopping for skeleton suit for James' first Hallowe'en. No luck. It seems that babies may only dress up as pumpkins in King's Lynn. 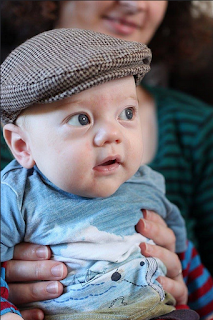 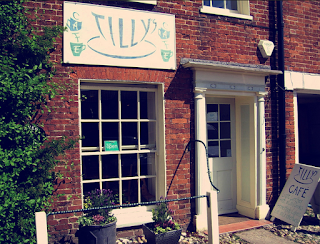 James and Katy went to Music Event for babies and small children. James apparently slept entire time. I strolled around Fakenham and discovered shop selling battered chocolate. Not battered as in Mars Bar delicacy popular in Scotland, just slightly scruffy and sold for next to nothing. Apparently outlet for sweet factory that supplies Marks and Spencer and Asda. Glad we don't have similar in Ballymena or I would be dead from chocolate poisoning within month.

Unlike previous visit when he screamed whole journey baby James slept all the way from Katy's to King's Lynn. Bid mother and child poignant goodbyes and started my journey. Was far too early and had to wait three hours at airport. Observed rude, unpleasant security person be nasty to everyone who stood in front of him. Thankfully got pleasant young chap myself. Had not got round to putting my eye drops in plastic bag and he was perfectly nice about it. Did not have to take my shoes off.

Bert had made an heroic effort to keep house tidy but it still smelt like ancient public house. Had no time to clean it as it was child-minding day. Evie and Martha were almost as delighted to see me as I was to see them. Evie got good child sticker from nursery and gave it to Bert. It was a lovely afternoon and we spent it on the trampoline, tree house and swing.

Removed vintage pub smell from house using vinegar, bleach and Zoflora. London Sister's birthday. Significant. My present and card arrived on time so quite pleased about that.

Met Hannah and Ziggy and went for walk and catch up. She had noticed horrible security man at Stansted too. Jazzer and Ben came round for the evening. Had red wine, chili and chocolate.

Amazingly, despite red wine, chili and chocolate, did not wake up with sore head. Caught up with my blog.

One of the best things about learning to write is being able to write lists. This is Martha's first list for Bert. I have a feeling it won't be the last.

Martha and Hannah are here for a sleepover as I won't see them for more than a week. Hannah and I are going to Norfolk to see sweet baby James and his people. Those girls do make us laugh. Martha being stern and serious whilst wearing a puppy dog sleep suit complete with tail. Evie poking me in the bosom area while I'm fixing her shoes, calling me 'Big Chubby'. Bert got the best laugh out of that. I had to tell him sternly and seriously  that what might be funny coming from a three year old is much less amusing coming from one's husband. Thankfully I wasn't wearing a puppy dog sleep suit at the time.
Posted by Nelly at 11:53 am 3 comments:

I first tried to grow garlic about twenty years ago. Like a fool I used shop bought garlic and planted it in an unprepossessing corner of a flower bed. Then forgot all about it. Sometime later I discovered it had sprouted but the resulting bulbs were quite pathetic. I never grew it again - until last year. This time, inspired by daughter Zoe and friend Les, I planted garlic in a prepared bed in the poly tunnel. I remember thinking that it would probably be a disaster yet, despite benign neglect and poppies and other tall weeds growing through it, the results were good. This year I was able to plant another crop using my own seed. As always I plan to do better and weeding will be carried out regularly and my crop will not have to compete with other plants. Maybe. This year I planted a third more than last year.

And the crop I'm using is lovely, flavoursome, juicy and far superior to shop bought garlic. Although I still haven't managed to learn the varieties. Les and Zoe will tell me.
Posted by Nelly at 10:50 pm No comments:

This was an absolutely beautiful week, real Indian Summer weather and I've spent a lot of time tidying and working in the garden. Which is why I haven't been to this Garden. This is the first year in a long time that I've been excited about my flower garden and, although parts of it were very weedy, the flowers came through. I'm already excited about next year. 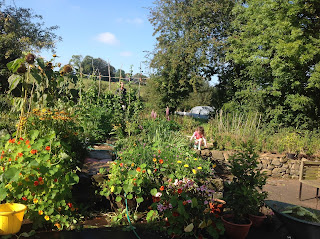 Wine making has kept me busy too. Apart from drinking it, I'd not looked near it for two months. In the past week I have racked seven demijohns, bottled damson and made a gallon each of rhubarb and gooseberry. This is the first year I had enough goosegogs to make wine so I'm hopeful it will turn out well. I was checking out the fruit I had in the freezer and found 30 pounds of blackcurrants. Half of those have become the beginnings of wine. Sadly there are very few blackberries this year but the elderberries look promising and Clint has cleared the dunghill. I was never able to get to them before as they grew over a steaming pile of cow shit. So - should be tasty.