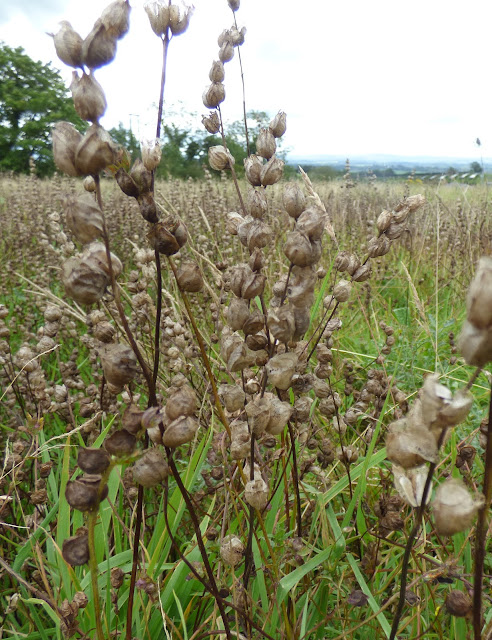 On Friday afternoon, Rachael, Ziggy, Twins and myself went off in search of yellow rattle seeds. Our first stop was a bit of managed meadow outside Rasharkin. Yellow rattle is a useful plant for establishing meadow flowers because it's roots attach to the grass roots, stealing the nutrients which weakens the grass, allowing native wildflowers to flourish. That's why meadow makers love it, and farmers not so much.
We were able to gather a good quantity of the seed while leaving plenty to spread further into the meadow. Meanwhile, William and his sister took turns looking after Ziggy. 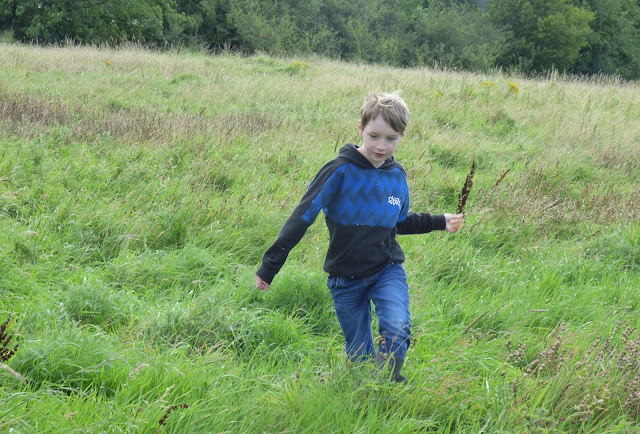 Young William running through the meadow. 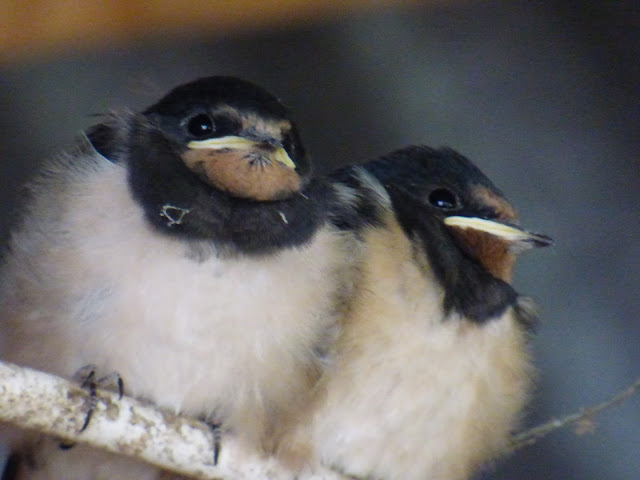 Back at home two of the four swallows in the shed had just fledged. They hung around for a couple of days but today they are out flying around and fending for themselves. 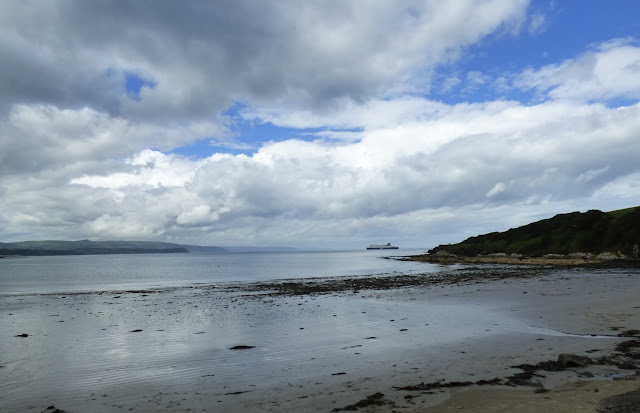 We took a daytrip to Islandmagee today, the first time I've been there in nearly ten years. We were Bert, my cousin Kathleen, myself and three dogs, Judy, the Jess and the Zigster.

Islandmagee is about three decades behind the rest of County Antrim and I can assure you, that in my book, that is a very good thing. The verges are (mostly) unkempt, the hedges are (mostly) high because the good people who live there have nothing to prove to anyone.

On our return we turned left at the top of Craigyhill, went home via Carnalbanagh, saw the other side of Slemish, and on the high ground a kestrel flew out all burnished by the evening sun, which made the hour, the day, all of August worthwhile. Onwards to Buckna, through Boyle Country, Broughshane and home.

We were only on the yard a moment and a red car pulled in. A friend, a good bit younger than me, to show us pictures of her grandson, born a week ago, in difficult circumstances but recovering well. And what will he call you? I enquired. 'Granny!', says she. I couldn't have been more pleased. Embrace the Granny. It's the way forward. 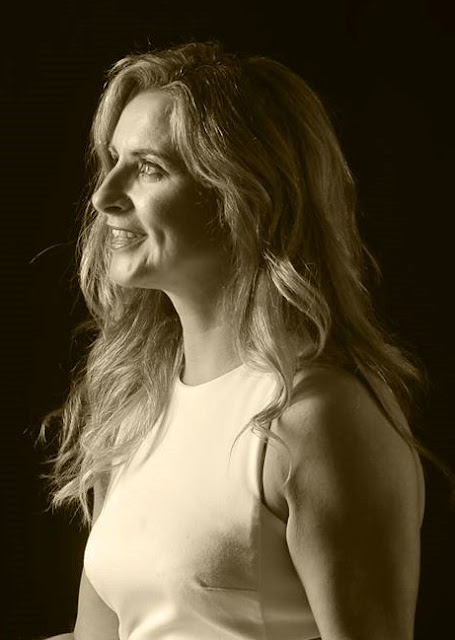 The newest Granny in town.

Woke Up This Morning

...from a dream in which I had a persistent dry cough. Just a dream, then I gave a dry cough, then another one.

Oh dear. And of course. Of course I have Covid-19. After all, I live in  Cullybackey, which is the current pandemic hot-spot in the Occupied Six Counties.

I pondered my fate. Perhaps I'll be one of the fortunate ones who get off lightly, who survive. That seemed likely. Apart from the persistent dry cough I felt fine. Then the guilt kicked in. Who might I have infected in the previous week?

Putting these anxious thoughts aside, I leapt from my bed, feeling sprightly enough, went downstairs, made coffee, ate a home made scone, returned to bed, completed a Sudoku puzzle, finished Lady Glenconner's posh memoir and started on Kate Atkinson's Big Sky. Looked at Jess lying beside me and wondered if perhaps my dry cough might have been due to inhaling her dander. Oh well, nothing another cup of coffee won't cure.

I live to fret another day. 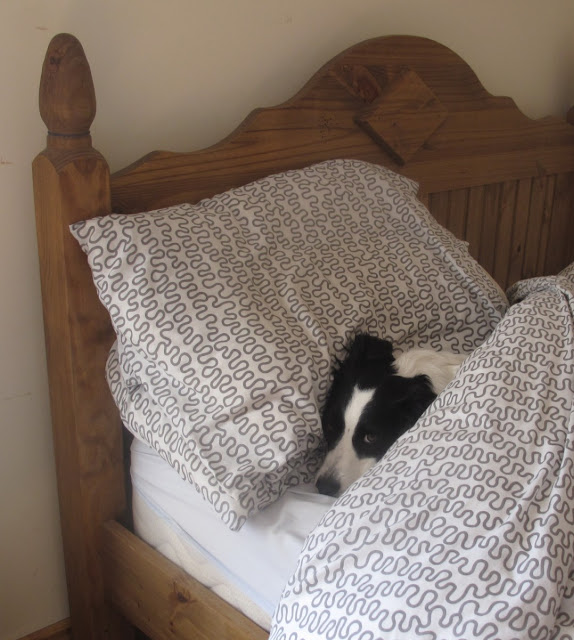 These photographs were taken three days ago when it was extremely warm. I look at the wildflowers that are often referred to as 'weeds' differently nowadays. So, I decided to photograph a selection of them in the same way that I take pictures of garden flowers. These plants just grow, and need no tending. 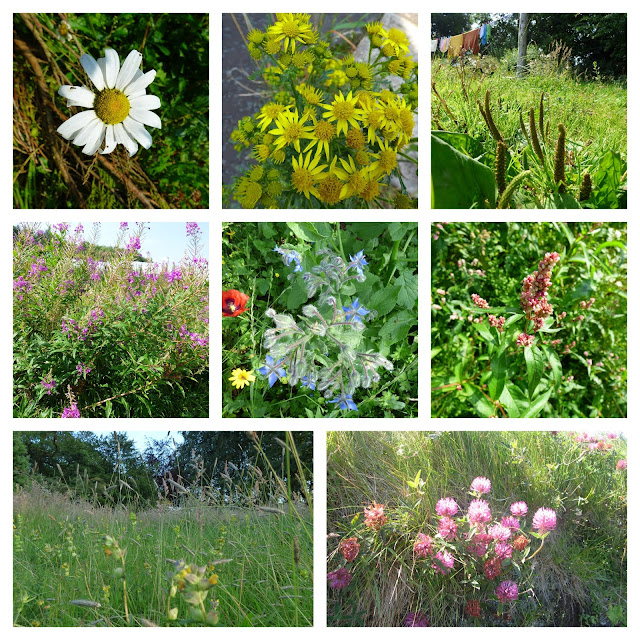 But! I hear the neat-freaks say. These are weeds, they make the place look so untidy. Of course they do, but who cares? Are woods tidy? Are meadows tidy? They are not and they shouldn't be. And don't get me started on hedges.

These plants are so important for the environment. They provide foraging for pollinators, food for insects, seeds for wild birds. When I pass the big patch of willow herb that grows between the poly-tunnels and the raspberry garden I am always looking out for caterpillars, especially elephant hawk moth caterpillars. I haven't seen any this year but they must be around somewhere. The yellow rattle that we encourage in what used to be a lawn will feed on the grass roots and encourage more meadow flowers to thrive. There is eyebright growing beside it. It's a tiny patch but is a start. There is no need to buy expensive meadow flower seed. The seed is already there, dormant and waiting for the right conditions to come forward. 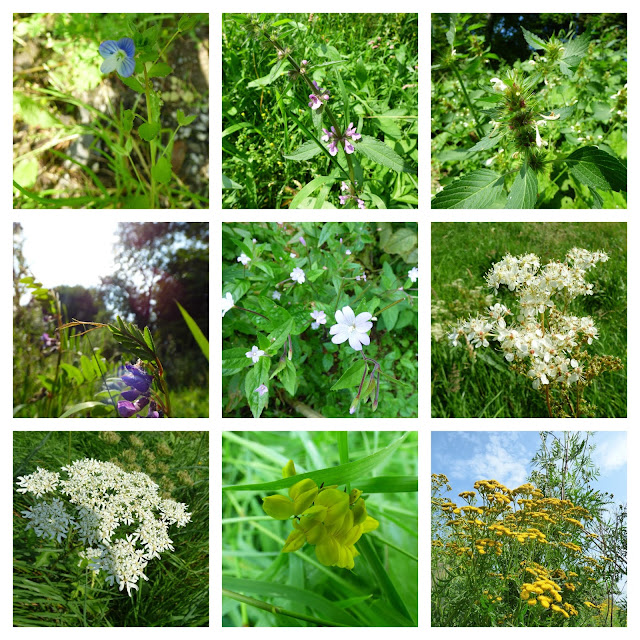 So, there we go. Our excuse for letting the wild things grow, for not being tidy. And I am sure you'll agree - these 'weeds' are really lovely too.
Posted by Nelly at 10:26 pm 4 comments:

Musings, now there is a word. A decade or so ago, when personal blogs were a thing, at least 20% of them featured that word, 'musings'. The other 80% were 'rants'.

This evening I visited Lidl in Ballymena and wore a mask. There were perhaps twenty shoppers there. Mask wearers were in the majority but it was light. Maybe twelve complying, eight not. Lidl had nothing to say on the matter.

Whilst at the council recycling yard and encumbered with a huge pile of Ikea cardboard (hoarded from last year's kitchen buying and at long last fucked out) and half-blinded by my mask, I stumbled into one of the traffic cones they were using to help the punters socially distance and fell over. Grazed knee, barked shin and mucho embarrassment. The council workers were most solicitous and kind and I assured them it was my own fault and I would not be seeking a claim. Who could be arsed?

All blog posts must have a picture. This is it. 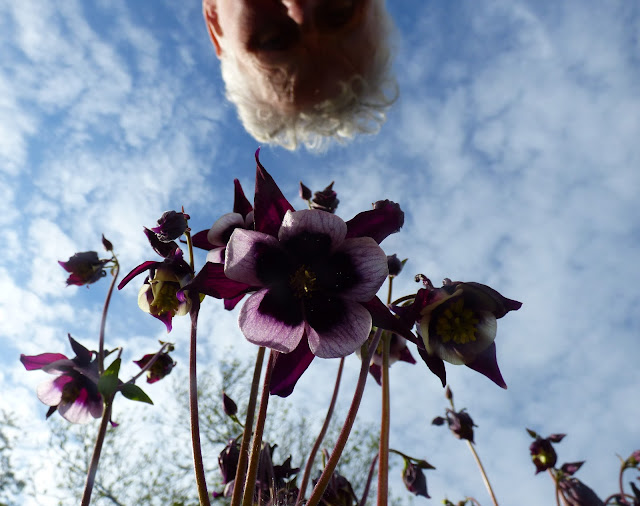 It's a selfie with aquilegias. One I prepared earlier. 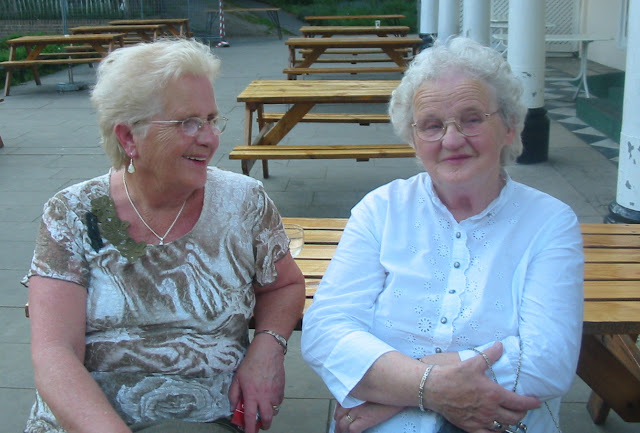 Look at that pair of darlings, Aunt Clare and Matty, two sisters born ten years apart, both died aged 84. Not just sisters, they were also close friends from a close family of seven sisters and one brother. Clare was the youngest and she died five days ago, the very last of the Randalstown McAnespies.
Clare was very family orientated. She adored Matty, my mother and was always a great support to her, as she was to all her other siblings. I loved Clare because she was always the same, genuine, sharp, funny and loyal.
My brother Joe and I called on her about three weeks ago. She'd been in hospital and during this Covid-19 thing, that meant no visitors. There were no hugs when we took our leave, not that Clare would have cared for she didn't go in for unnecessary sentiment although she'd tolerate it.
Clare was the one everyone turned to in a crisis. She cared about everyone in her extended family and she looked after both her parents until their final days. She was a great woman and I shall miss her so much. 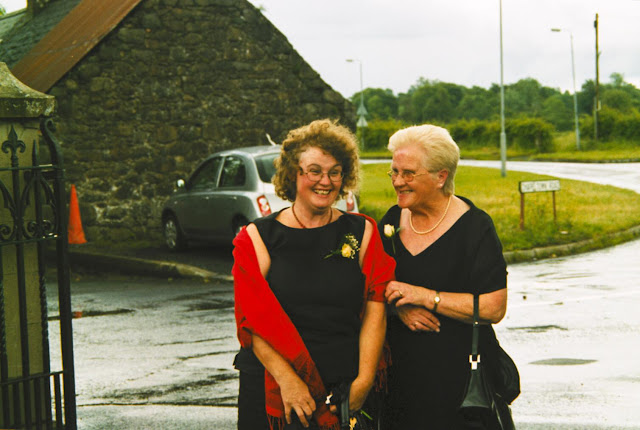 Every picture tells a story. This was taken (by Zoe) at my sister Deirdre's wedding. Clare was always there at all the important family events. I don't remember what she said to me or why I am laughing but, knowing Clare, it would have been something really naughty and rascally.