A Face Only A Nelly Could Love 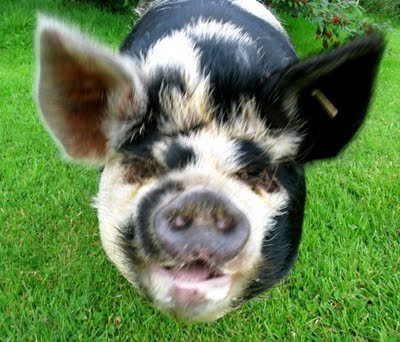 Email ThisBlogThis!Share to TwitterShare to FacebookShare to Pinterest
Labels: kunekune 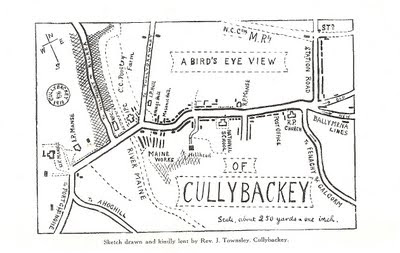 This map was drawn by the Rev. Jonathan Townsley who was the minister for the United Free Presbyterian Church in Cullybackey. Click map to enlarge.

From 'Random Rhymes frae Cullybackey' by Adam Lynn, 1911.
Posted by Nelly at 1:07 am No comments:

My new role - pig scratching post. Boris actually swept me off my feet.

Email ThisBlogThis!Share to TwitterShare to FacebookShare to Pinterest
Labels: kunekune

It was three days since I'd last set eyes on my grandchild and I just could not keep away for another moment. Hannah and I called in for ten minutes after work. It was a lengthy ten minutes. How fascinating this little human being is! And really, all she does is nurse and poo and burp and pull the most peculiar faces. I'm told she cries but, so far, never in my presence.

She is, of course, far more beautiful than the normal run of babies. She is, which goes without saying, already displaying signs of superior intelligence. And, for a creature barely a week old, she is amazingly strong and active and alert.

The Best News In The World

Today was always going to be a busy day. We'd planned to go visit, with a view to procuring, kunekune pigs. Later we'd be going to the Wee Manny's for a surprise birthday party.

What I didn't expect was hearing from Dave that Zoe has been safely delivered of a daughter, our first grandchild. She was a week earlier than expected - the impatient little thing!

So now I must go and wash the smell of pig from my person and get myself ready to visit Zoe, Dave and daughter.
Posted by Nelly at 12:50 pm 22 comments:

The Rich Are Different 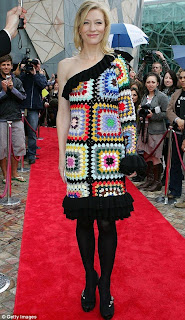 Give it back woman, Pearlie's knees are foundered!
Posted by Nelly at 10:30 pm 4 comments:

Email ThisBlogThis!Share to TwitterShare to FacebookShare to Pinterest
Labels: celebrities

A Saturday in Edinburgh

While we were in Edinburgh we couldn't have wished for a better tour guide than our adopted fourth daughter, Miss Mels. When we weren't out people-watching, fudge-eating, ghost-touring, gig-going, tartan-shopping and gourmandising we chilled in her flat for a time.

Mel lives in a very lovely part of the city. It is jam-packed full of interesting specialist shops selling things like paraffin lamps, old-time gramophones and delectable smelly cheeses. The charity shops were to die for. I spent a very enjoyable afternoon shopping for second hand books while Bert was falling in love with an Irish barmaid in one of the local pubs. Afterwards we went back to Mel's for coffee and a listen to her old gramophone records.
Posted by Nelly at 9:46 pm 4 comments: 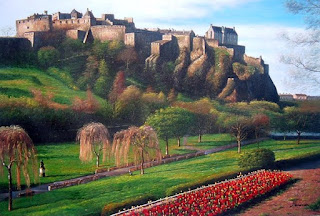 Going to Edinburgh to see Mel and Mikey and castles and stuff.

Back on Monday. Burglars beware! Nellybert's will be looked after by Bonnie (scary-looking), Paddy (really scary), Jakers (vicious) and Hannah (really vicious).
Posted by Nelly at 11:42 pm 9 comments:

Email ThisBlogThis!Share to TwitterShare to FacebookShare to Pinterest
Labels: holiday

Come Into My Parlour

The other day I asked the household where some kitchen gadget had got to. Bert says,

The last place I saw it was on the sill in the parlour.

I never said parlour. I said…you know…that room out there.

You mean the room with the washing machine in it?

The scullery. Or utility room if you like. Where did parlour come from?

It’s a big problem for me this shifting of place names. The outside is a nightmare. The sheds are referred to something like this -

Of course we don’t have fifteen sheds. We have about six shed-type buildings and each one has at least three names depending on which decade Bert’s mind is settled on that particular day. For instance, if Bert refers to the Turf Shed, will he be speaking of the shed which currently contains turf (unlikely) or does he mean a shed that was used for turf storage twenty, or even forty years ago. This is not much use to me as I don’t know where they kept the turf during the Swinging Sixties.

It was no better in our last place where we only had a garage and three polytunnels.

Where are my orange handled secateurs?

The one with the clematis.

They all have clematis.

Big ones or liners?

Och you know. The one with Denise’s potting bench.

She has two bloody potting benches! Here they are! Why couldn’t you just have said the middle tunnel?

I blame his mother.

There was none of that nonsense in our house. Upstairs we had 4 bedrooms which were named according to the persons who slept in them, downstairs was The Kitchen, The Scullery, The Room, The Bathroom and The Room Before The Bathroom. It never changed downstairs. Outside sheds were named and stayed named. You knew where you were in Tannaghmore.

And don’t get me started on fields.

I was Pearlie-sitting yesterday and didn't make the Portrush air show but whilst, Cinderella-like, I was hanging out a lineful of Pearlie's grannypants, I heard the sound of old-style propellers, looked up and saw this fellow fly right over my head. It was flying low so I got a right good look.

Then, this afternoon, while Bonnie and I were braving the drizzle on the riverside walk we heard and saw the Red Arrows flying home. That put a huge smile on my face. I do like seeing sky machines. And have liked it ever since those far-off days when I would skip school to hang around Aldergrove Airport. Such days!

...I will be mostly making Pumpkin Pie and Pumpkin Soup.

Katy may look a little grumpy in this picture but she was only out of hospital (day before Christmas Eve) and those SCBU nurses had her spoiled rotten. Four year old Zoe takes it all in her stride. Just look at that calm expression.

Zoe is going to be the greatest mommy.

This month! I'm so excited!