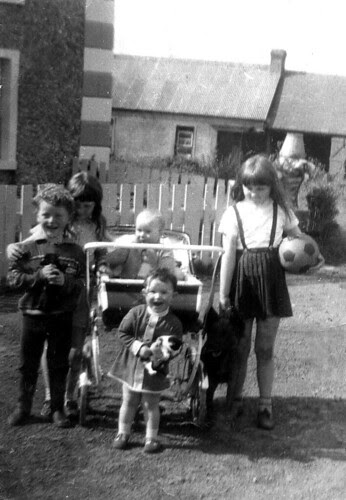 This pram is a late 60s model. It was kept well filled so I'd imagine it is long, long gone.

Now this pram dates from the late 50s. It only ever held one baby (Bert) and it was carefully preserved. In fact the damn thing is still in my attic. What shall I do with it? Who would want it? Do you want it? Does Mr Bolan need another bogey?

The First Day Of The Rest Of My Life

I taxed the car and sorted the driving licence and organised a copy of the marriage certificate.

Sadly, it seems that this will not come back in time in order to allow me to exercise my voting rights on the 6th May. But as I live in North Antrim what does it matter?

Leitrim Sister is up for a few days. We went out to Matty's tonight and had our tea. Matty in good form. Did not give us disapproving looks when we cracked open a bottle of wine to wash down the quiche and salad. Fair play to the woman.

These are my May Resolutions.

1. I am going to read/listen to À la recherche du temps perdu in an English translation as my French is non existent.

2. I am going to declutter my house.

3. I am going to spend more time with my family.

Email ThisBlogThis!Share to TwitterShare to FacebookShare to Pinterest
Labels: resolutions

I was able to put my hand on birth certificates for Bert, Pearlie and myself. I had dog licences for dogs long mouldered in their graves and I had my first marriage certificate with its accompanying divorce certificates and bank statements from ten years ago and pounds of guff from various financial institutions and effing Christmas cards from way back when. It's time I had a good redd out. You see it is no good being able to put your hand on something if you don't put it back so that the next time you want to put your hand on it....

Ah well. A wasted hour looking for a bloody document and I'm not a bit cross. That has to be a good thing.
Posted by Nelly at 12:11 am 4 comments: 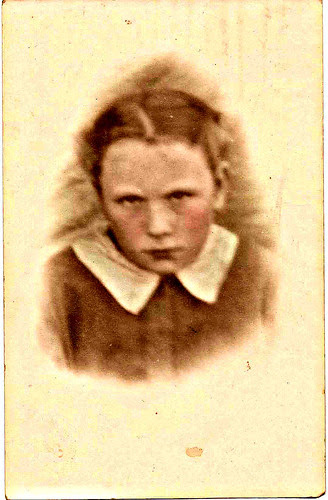 I wonder what made Nessie appear so thoroughly pissed off?

Me? I just want something I cannot have. I want my head showered and given peace. I want to be a hermit and I want to get away from it all. I want the old women to step aside and let the new crop of old women come to the fore. I want no responsibility. I want to be free.

The Fox and the Cat

Oh Hannah! Eight days after your birthday and I never did give you a greeting like I did in 2009.

But, as you know, life does suck sometimes and, if it didn't suck - sure then, we'd never appreciate the good times.

Good times like when we get to see that incredibly dangerous creature - the fiery red fox (beware the fox you foolish chickens and Michelle.)

It was sad you didn't have your camera with you - but then, what camera could capture an image so wonderful as the beautiful illustration of Janusz Grabianski?

So, even though I wasn't wearing protective clothing, I thought I'd take a little film of our bees guarding, and orientating and foraging. Standing at a respectful distance with the zoom on resulted in blurred footage, so then I thought of leaving the camera running on their landing board.

One of the guard bees was most displeased and zoomed angrily around the camera. I reached over to turn it off and make my escape with it. The guard bee was still not happy and followed me, all the while buzzing around my head. Then it flew into my hair and I could feel its little wings birring against my neck. I remembered one of the things I'd been taught - honey bees do not like sudden movement or vibration - so I stood stock still. I felt calm. I reckoned that if I tried to get the bee out I'd certainly receive a sting and the bee would die in defense of the hive. But if I stood quiet the bee might fly away. And she did!

Bert was most impressed with me. He says the moment they come near him he flies up the field and bats them away and he always gets a sting.

Still - I'm for wearing the bee suit from now on. I'm even for wearing it to Katy's wedding. That's the mother of the bride outfit sorted!
Posted by Nelly at 6:17 pm 6 comments:

Email ThisBlogThis!Share to TwitterShare to FacebookShare to Pinterest
Labels: bees

I started the Preliminary Beekeeping Course at Craigdun Apiary today and really enjoyed it. Bert and Clint did the same course last year and Bert has had a hive in the garden for nearly a year now. I'd hear Bert and Clint using expressions like 'super', 'propolis', 'nuc' and 'varroa strip' and not have a notion what they were talking about. I know now, and a wee bit more besides. So if anyone is thinking of getting involved with a Beekeeping Association, I'd have to say you jolly well should for you'll meet a lot of interesting people. And the bees? They're even more interesting than people. And propolis smells wonderful. Actually I already knew about propolis for Bert's bee suit is clarried in it. Now I have to go on and buy my own bee suit. I'm for getting a green one for white is such a fattening colour. 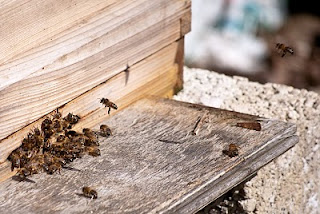 Bert's bees acting busy (Photo Leslie Bamber)
Meanwhile Bert is pleased that his hive is better than Clint's. Those old schoolboy rivalries never, ever die. Clint, as you might recall, bought our old house and immediately set about getting rid of all my flower gardens,rooted out our lovely hedges and generally demolished wild flowers and weeds and replaced all with grass and sheds and geese. So his poor bees have to fly for ages to find anything to eat. Ours are surrounded by a glory of blossom and pollen- the lucky little beasts. 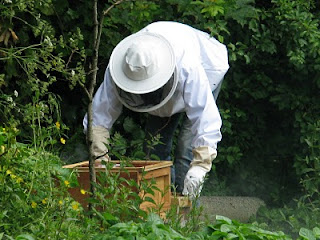 Bert inspecting the hive
Posted by Nelly at 11:13 pm 1 comment:

Email ThisBlogThis!Share to TwitterShare to FacebookShare to Pinterest
Labels: bees

Nelly: Yer man was in a really good mood today.
Bert: D'ye reckon he got 'the ride' then?
Nelly: I think he got the 'kind word'. The way things are going right now, that'd be more than enough to please him.
Posted by Nelly at 12:27 pm No comments:

Email ThisBlogThis!Share to TwitterShare to FacebookShare to Pinterest
Labels: conversations, other people's lives

I Blame The Parents

I took my granddaughter to visit her great-grandmother this morning. In other words, I took Martha to visit Martha. As always, Matty was delighted to see her great-granddaughter and it cheered her up no end and took her mind off her current medical problems. Matty was horrified though, when I reached Martha an earless teddy bear to play with.

You can't give her that! That's what Jack plays with when he's here. It's all dog germs!

Mother - don't worry about it. Zoe says she's just not to have sugars or trans fats or chemical additives. Germs are OK, germs are natural. And guess what? She was eating nettle soup yesterday and she loved it!

What kind of soup? Natural?

Aye. If you like. I did say to Zoe she's probably the only baby in Ballymena that has been fed nettle soup.

She's a dainty wee thing. What age is she now?

I remember when you were seven months you got congestion of the chest. You were a fat wee thing compared to Martha.

Aye. But no wonder. You were getting Farex in your bottle and glucose water from when you were three months.

So it's all thanks to you that I'm fat and my teeth are buggered.

Ah sure. We knew no better in those days. 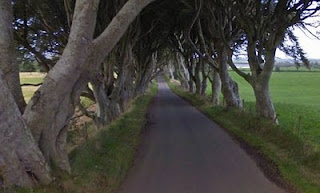 The Dark Hedges near Armoy are a draw for camera buffs from all over the world. Even those photographers from Google Street View have been there. Google's picture is good but it's not as good as Zoe's.

But where Google Street View excels is by showing you that convenient little layby where you can park your vehicle before wandering a few yards further down the road to take your shot. 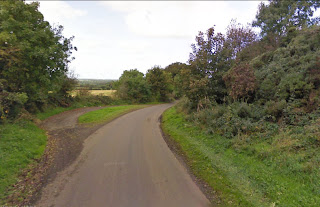 One of Matty's good friends believes that if you cannot say something uplifting then better to say nothing at all. This friend was in the house this evening and was doing a good job of cheering my old girl up as my old girl was in very middling form due to a sore stomach.
She cheered me up as well. First of all she admired my outfit which was a rather sombre black and charcoal rig. Then she admired my hair although it was lukewarm as I know she privately thinks it could do with a run of the scissors. And then she admired my figure.

Ye've lost weight for sure!

Indeed I have not. I have weight on.

She was only out the door when Matty fell into despondency again. She's for the doctor tomorrow anyway so we decided there was little point in going to A&E for eight hours or bothering the Dalriada Doctor. I really do hope that was the right decision.

When her time comes Matty shall have this engraved on her tombstone. 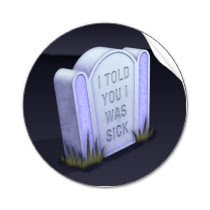 Meanwhile I cheer myself with Sheena's words - I'm like a scutching stick.
Posted by Nelly at 10:29 pm 2 comments: 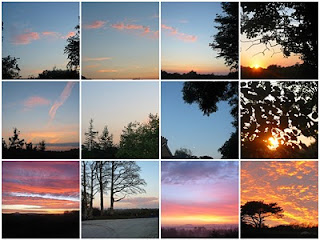 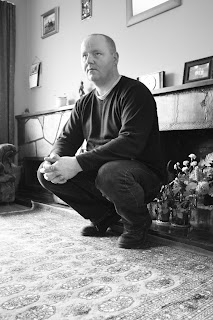 It's that notoriously camera-shy guy's birthday. My baby brother Joe. Many happy ones to come bro'.

Matty impressed upon the rest of us that even though our new baby brother was born on April 1st we were never, ever to call him April Fool. And we never, ever did. Well look at him! Would you?
Posted by Nelly at 11:53 pm 1 comment:

....meanwhile Nelly is well behind the times in not realising that Google Street View had eventually got the length of the loanins, boreens and keshes of Norn Iron. Well better late than never. Bert and I were this very evening negotiating our virtual way around Craigs and Dunminning looking for a particularly charming thatched cottage. "Y'know," says I, "It might even be quicker to get in the car and drive there."

And speaking of the car - this evening while placing my mother's weekly shop in the boot (trunk for youse Americans) I caught sight of something grey and furry. I took it for a dead rabbit at first. Closer inspection showed my rabbit to be a pile of German Shepherd puke with a fungal beard growing on it. I did cringe for my car had been at the auto electricians all day Tuesday and I know that the man was all over it looking for a fault. I wondered at his sad, pitying look as I collected my keys. Now I know. He thinks I am the sort of person who drives around with a pile of moldering dog vomit in my car. I am that person.

but you can give it a go if you want 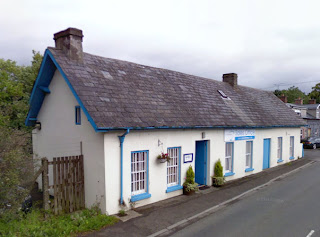 At lunchtime today I walked from here... 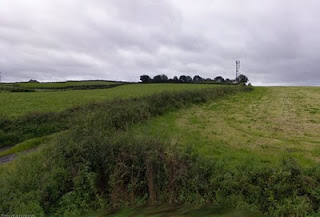