I am going out to pick blackberries. I may be some time.
Posted by Nelly at 11:45 am 4 comments:

Recently I have slipped back to that bad habit of getting up late. It is certainly delightful to snuggle under the duvet in the morning but getting up after 9 feels so wrong. The days are getting shorter now and it is a waste of the light. So I've given myself a jolly good talking-to and will be making every effort to climb out of bed at least an hour earlier.

It is going to rain tomorrow. It is going to teem and lash and blow for it is Monday. Now I don't know if anyone else from Cully has noticed this but it always rains on Mondays, usually in the afternoon. I think it might have been fine for a couple of Mondays in May but not since. Even after a pleasant spell, like the past three days, I can be sure it will rain on Monday.

The reason I can be certain about this is because my oldest daughter and her family always come out here on Monday afternoons to work on their vegetable plots. And it is always raining when they are here. Luckily, for them, a good part of their plot is in the poly tunnel, so they don't get too disheartened.

I'm just sorry I cannot go blackberrying tomorrow. It is very fine and pleasant to wander up the hedgerows listening to Sebastian Faulks' 'Birdsong' with Judy at my heels and a bunch of cattle ignoring me.

That wee black bull. He wasn't harrassing you?

The wee black bull? Would he?

I don't think I'd have been in that field with Judy had I known that the wee black bull was getting airs about himself.

So there it is. Two days out in the open air. Working! And I feel a lot happier even though I've got a sore shoulder (right side), a sore elbow (left side) and sore knees (both). At least I didn't get attacked by the wee black bull. That would have been hard to take and it only two weeks since I got tossed and trodden on by that pig.
Posted by Nelly at 11:30 pm 2 comments: 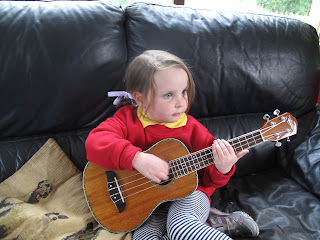 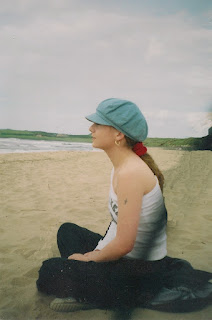 Remembering Shirley Finlay whose dumped and beaten body was discovered on the 19th September, 2006. Six years now since her life was taken from her.
Posted by Nelly at 10:47 pm No comments: 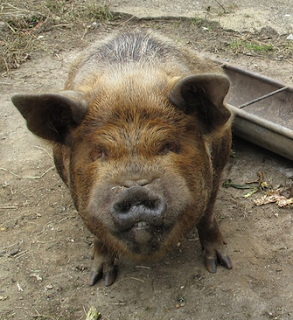 It was only the other day that I was hand-feeding that brute the choicest, sweetest dates that our local greengrocery could provide. You'd think he'd show some gratitude, wouldn't you?

This is what Rusty did on my birthday. Bert was making a cake so asked me to take care of his evening chore of feeding and housing the hogs. I agreed and went to their sleeping quarters where I prepared them a supper of pig nuts, cabbage and pineapple. I then went to fetch them. First I turned off the electric fencer. The fencing is behind a length of corrugated roofing tin which is a bit makeshift and not really necessary but Bert thought it would provide an extra deterrent to their breaking out. The tin is supported by a heavy old car wheel rim. Arrangements like that are not how Clint rolls but it is very Berty.

Anyway - I was a bit fingers and thumbs with the fencing cord and couldn't get it detached. The pigs were becoming impatient, especially Rusty. I looked into his wee piggy eyes and did not like what I saw there. He was for coming through and  nothing, not electric fence or sheet of metal was going to stop him. I quickly turned to get out of his way but he charged me. The corrugated tin went flying with me on top of it. I fell to the ground. I'd had enough time to worry about getting cut on the metal or the pig getting injured but neither happened. What did happen was I hurt my shoulder and the pig ran over my arm in his haste to get to his supper. The wheel rim rolled gently down the yard just as Bert came running out. He'd heard the clattering of flying tin, wheel rim and wife. I knew he wanted to laugh but he restrained himself.

Meanwhile Lily was screaming her head off. Unlike Rusty she is mightily afraid of the electric fence and she did not know that it had been switched off. So she must have been thinking that Rusty had beat her to the supper trough and was scoffing her share of the grub. No doubt, with her super piggy senses she could hear him gobbling and smell what little was left of the pineapple.

I have been left with cloven hoof marks on my right arm and my shoulder is a bit stiff but I'll survive. Rusty is forgiven. He was just being a pig. I'll just have to be a bit more careful in future. Pigs are rough.
Posted by Nelly at 10:52 pm 3 comments:

Seeing as it is my birthday I thought I might be lazy and recycle a post from September 2004. I'm sad to say that Harry de Cat is no longer with us. But his legacy remains - Bert is now an avowed cat lover.


The Proper Care and Training of Cats 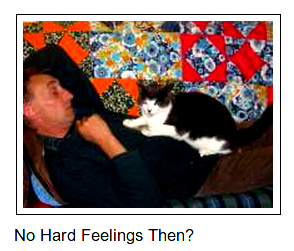 When our ancient three-legged cat died I swore there would be no more cats. Then Scary Tam called around and said they'd had another litter of kittens. "What are they like?" says I. "Totally gorgeous" says he. "I might take a look at them" says I. I phoned Zoe who agreed to accompany me on the viewing expedition. "I definitely want a female" says I. "I quite agree" says she.

So we landed at Scary Tam's and the kittens were rather nice. Zoe upended the three of them and pronounced them all males. She considered a career as a vet for a time.

"I'll take one anyway" says I. And so we landed home with Harry. He was always great fun. No fear of dogs at all and he used to take great running leps at them. Nowadays we have to dose him with catnip to get his violent urges going. Needless to say we got him castrated. My friend Vinny says that the average lifespan of an unneutered tom cat is two years.

But there was one huge problem. Harry had a thing about pissing on Bert, preferably when he was asleep. The duvets I had to dump! He got a name change for a while and was known as Pisher McGee. But he was still loads of fun and got away with it. "He'll grow out of it" says I. "He'd better, or I'll shoot him" says he.

Then one day that Bert happened to be up early and he went to the front door to have a piss. As we live in the country there was no one to see him but a few thrushes in the hornbeam hedge and Pisher McGee. Bert spotted the cat, adjusted his aim and sent a good morning strone all over Harry. And as God is my judge Harry never peed on Bert or anywhere in the house after it. 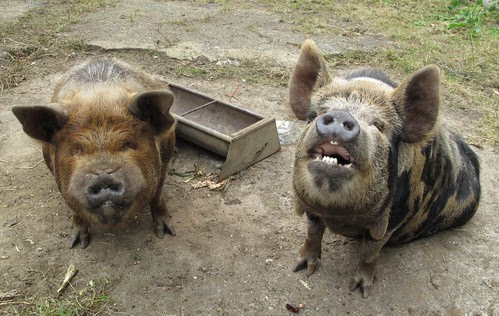 sugar high, originally uploaded by NellyMoser.
What pigs look like when they have just shared a packet of dried dates.
Posted by Nelly at 11:41 pm 2 comments: