All was going well with the Radio 3 all through the night plan. The weird noises in my ears were bearable and I listened to some unfamiliar sounds and had good second thoughts about some familiar ones. For instance, the Carpenters - I'd no interest in them back in the 70s when they were all over the charts. They were too soft, too middle-of-the-road for my liking. But - Karen Carpenter covering John Lennon's Ticket To Ryde? Sublime. Even Lennon himself said the Carpenters did it better. I listened to a lot of Hannah Peel (no relation to John, as far as I know) and she played some interesting tracks, many the night I drifted off...

Then last night. I awakened at some early hour to a screeching soprano. Dear God! It was worse than tinnitus. I got up to turn the volume down and took note of what was playing, Joseph Bodin de Boismortier - Les Voyages de l'Amour. For research at a later date..

So I'm researching it right now, playing on YouTube as I type this. It's not as jarring as it was last night but it won't be going on my top ten operatic favourites any time soon. 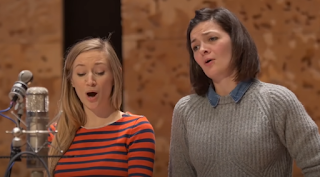 Had it been these two lovely women that woke me from my slumbers, I would have found it a great deal more soothing. I did get back to sleep eventually and wakened at a reasonable hour from a horrible dream of an unmet essay deadline.

I've only recently become aware of a sort of rushing, hissing sound in my ears. It's always there, but it's low-level. During the day I don't notice it. It's at night, when I'm in bed that I hear it most and it has started to make me feel stressed. For at night it's SO LOUD.

That's one problem. Another problem is - what sort of image can I use to illustrate a blog post about tinnitus? Well. The noise in my head is not the only thing that is causing me anxiety. What about Covid-19? That's a huge pisser. Always there at the back of my mind, impacting everything. My nephew tested positive. He's OK, thanks be. My brother had a much-longed-for holiday cancelled for the umpteenth time. One sister has tinnitus far worse than me and she had an appointment with a specialist postponed indefinitely. A very close family member had her wedding cancelled at the last minute. And, most difficult of all, another of my sisters is currently undergoing treatment for cancer and as well as that anxiety, she and her family have to be extremely careful about shielding.

Anyway, here's my chosen image. A snippet from First Dog on the Moon which encapsulates another one of my current anxieties. 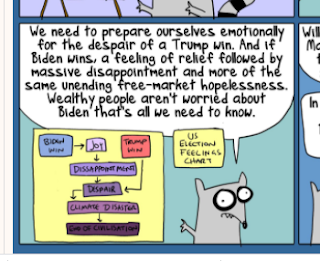 I did a bit of research on tinnitus and knowing that there is no point in seeking help from my GP as it is hardly that big a deal in the circumstances, I decided to find my own cure. Distraction. I take my radio to bed and tune it to Radio 3, turn the volume down and drift off to sleep. If I wake up (and I usually do) I don't think about the stupid noise in my head, I just listen to the radio. They play some weird stuff at night. Baritones singing Auld Lang Syne in Russian, tinkly things, obscure operas. This particular night after I'd wakened, peed and returned to bed there was a very shrieky soprano singing so I thought I'd change channels. Radio 4 had someone expounding the necessity for a Trump second term, so I moved to Classic FM hoping for a similar soporific effect. Head on pillow. What's this? A childish voice prates,
Grandad had two strokes, now he has vascular dementia...
Leap from bed. Back to Radio 3. Who wants to hear stuff like that in the middle of the night?

I Discover The Murdocks

In the year 1910, the village of Cullybackey boasted three blacksmiths. These days blacksmiths are thinner on the ground and, as far as I know, they tend to concentrate on shoeing horses. Am I wrong about this, Corinne Robb? 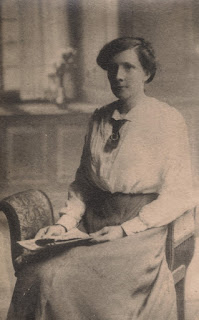 My family tree searching (snooping) has thrown up one blacksmith. His name was Patrick Murdock and he was Bert's great-great-grandfather. I don't know where he plied his trade but it seems he lived in Dreen which is only a step or two down the road. The thing about Bert's family is that they didn't stay put. If they weren't heading off to Australia or Canada they were flitting back and forth from Scotland. Mostly they avoided England which was very sensible of them. When I first met Bert I thought him short of blood relations but my research (snooping) has proved me wrong.

I happened to mention to him the other day,

Y'know there are more people on my side of the family got murdered than on yours.

But on your side there seem to be more criminals.

Your lot aren't very religious. We've got a good scattering of priests and nuns and a really big family of Independent Fundamentalist Baptists in Iowa.

Will you be visiting the Iowa crowd?

Wise up! Although I'm sure they'd make me welcome. 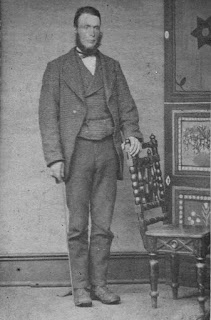 Nice lacquered cabinet in that picture. Photographer's own I should think.

Perhaps the worst thing I discovered so far is that one of his (same name) Scottish second cousins married a woman from Florida who is a fervent Trumpatorian. She's got the hat and everything. I haven't discovered one of those on our side. Yet. 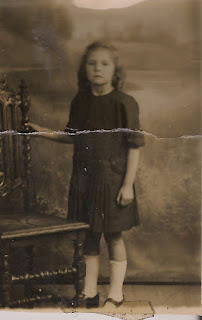 There is always a chair with barley twist spindles.

I've still to establish who the mutton-chopped man and the serious child are. The lovely woman in the first picture is Bert's maternal grandmother. And I'm still working on the Murdocks and haven't got any further than 1911. They're leaving blacksmithing behind so I may be losing interest in them.

Some of the photographs in this post will have little to do with its subject matter. They are merely there to pad it out and make it look pretty. 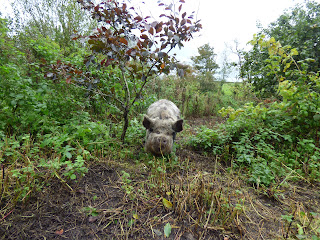 I'm worried that I'm getting too fat. This will never trouble Lily

When I have worries I bury them under an obsession. My current obsession is researching Bert's family tree. Tonight I am obsessed with his first cousins, once removed, that emigrated to Queensland. Bert is under the impression that these cousins are very far out relations because, in his family, emigration to Queensland changed first cousins once removed to fourth cousins, removed 9581 miles away. 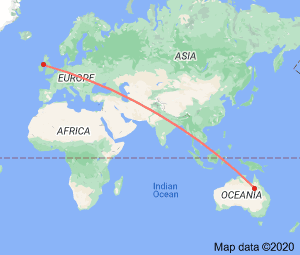 My main worry is Covid 19. And because of that, I got my very first flu jab today which is not as stupid as it sounds because now, if I get flu-like symptoms, I'll know straight away that it is the White House Virus. The flu jab experience was interesting. It took place in a church hall and was well organised. Lots of masking up, social distancing, temperature taking and fellow boomers. I'm interested in other oldsters. Like to see how they are getting on. I listened hard when they were telling the assistant their dates of birth. You're ten years older than moi? I like the cut of your jib. Doing well. Not too tottery. We'd been asked to wear short sleeves. one dear hadn't got the memo and was encased in the tightest, white jumper in the world. She had to heft it off and expose her sensible white underpinnings. Out of decency, I averted my gaze but not before noting that she seemed to be wearing a liberty bodice. No doubt inherited from her own grandmother.

Must be time for another random photograph. 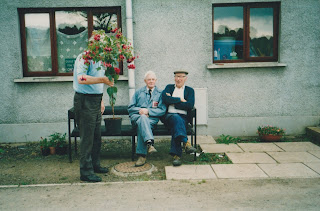 The third one along is Bert's father Johnny. The other two were keen gardeners who used to frequent our nursery. The one hiding behind the standard fuchsia was very keen on fuchsia. The guy in the middle was a rose man. The day that Johnny died he was in our yard first thing wanting to buy more rose bushes. I told him we weren't open for business, that Bert's father had died. He still wanted roses. I remember thinking him very callous. That photograph was taken three years before Johnny died, twenty-six years ago. They will all be gone now. The man behind the fuchsia was a sweetheart. That's all I remember. Not his name, just how I felt about him.

Twenty-six years later I can understand the rose man better. Death was unfamiliar to me, I wasn't used to it.

I have worries closer to home. They must be kept in a box with a tight lid and several bricks piled on top. Johnny, the third guy along, told me once that there is no point in worrying, it didn't make anything any better. I should keep that in mind. 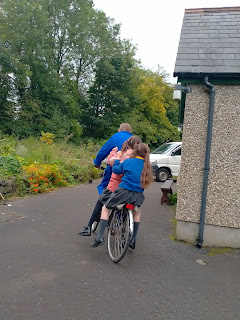 This picture grounds me. What is all this worrying shit? Just grow your hair, tie it in a man-bun, wear a blue boiler suit, pile your two oldest grandchildren on to a rickety bike, and speed race around the house while they squeal with glee.

And leave the worrying to other people. People like me. Now back to Queensland.

Some people just love to dance. I am not one of them. Two left feet, self-conscious, ungainly. I envy the dancers. Given another life to live I would have put more effort into it and danced like no-one was watching. 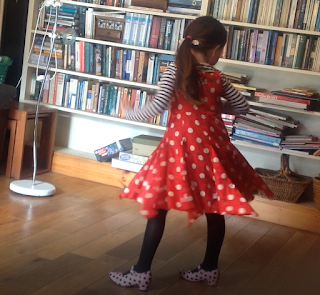 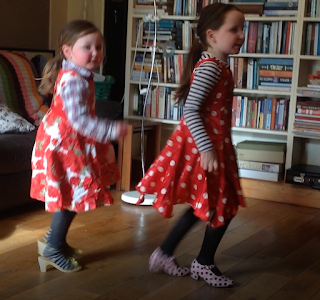 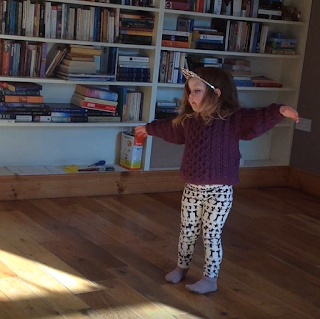 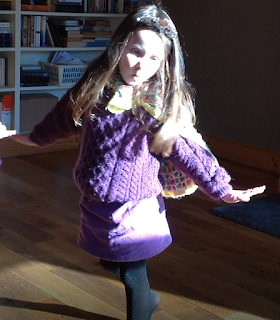 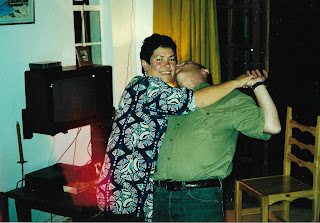 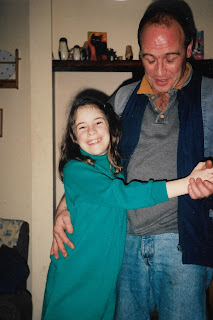 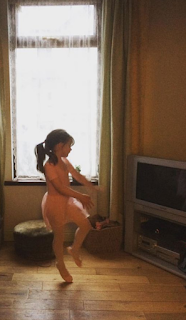 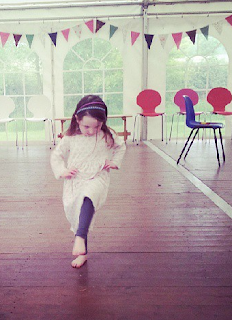 Why are you so belligerent?

Said Bert,  speaking to me, his wife.

Belligerent? I think not. Belligerence is defined as hostile and aggressive, while I am only impatient and assertive. I have lost patience with stupid and am not afraid to say so.

And I am starting to realise that my husband is somewhat less feminist than I have previously given him credit for.

But to lighten my mood here is a lovely picture of some flowers. I think they may be centaurea, rudbeckia and something else I cannot remember. 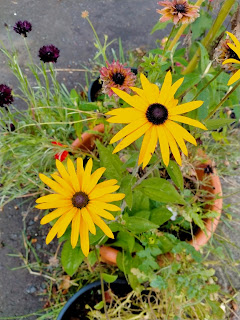 It's not Bert that is stupid, it's just that he is perfectly OK with some other people being stupid.