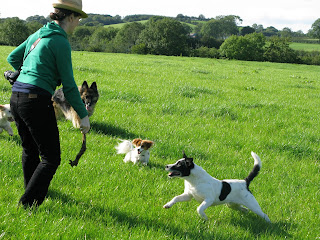 Happy birthday Zoe! Time sure does fly past for here us a picture taken a few years back showing Bonnie and Paddy in the finest of fettle. They are spent and gone now yet Zoe looks as fresh as ever.
Posted by Nelly at 12:16 pm 1 comment: 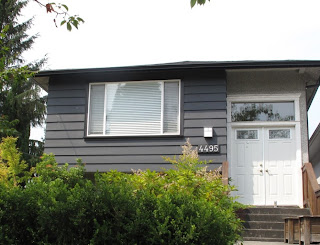 Many years ago, when she was more at herself , Matty made a trip to Vancouver to see her son and his family. The entire time she was away Daddy fretted and would barely leave the house 'in case your mother might ring'. Kerry Sister kept house for him during this time and she had imagined taking him out on lots of visits and expeditions but he was having none of it. "Your mother might ring." I remember that Matty's youngest sister loaned her their mother's wedding ring to wear during the trip so that Matty might be watched over from heaven. Even so, while Matty was going through Heathrow Airport she experienced a panic attack. Then she remembered her mother's ring, had a sense of her mother's presence and recovered, carried on and completed her journey with no further drama.

She had a great time in British Columbia with the brother and his Canadian family. That little house at the top is where she stayed. While I was there Vancouver Brother took me on a little tour of all the houses he has lived in. That house was the first. There was a huge pear tree in the back yard and two of his children were born there.

I fretted a bit myself before I left for my trip. Worried I would miss a plane connection, worried that the brother and I would get fed up with each other. After all, we would never have spent so much time in each other's company before. But mainly I worried about the journey. I'm not afraid of flying – just of missing planes.

Like Matty before me I was wearing my mother's wedding ring. I consoled myself that if Matty could make this trip without mishap, then so could I. It wasn't as if it was the ring's first visit for it had been there before me. My trip went well. I got there in one piece. One poignant moment – on first seeing each other at the airport Eamon saw our mother in my face and I saw our father in his.

And the return journey? I missed a connection. The world didn't end. Nobody died. And Aer Lingus didn't charge me an extra cent.
Posted by Nelly at 2:06 pm 6 comments:

Villy, Crunch It Up Real Good

Regular readers will have noticed that I haven't been on here for a while. I am away from yonder Garden visiting with Vancouver Brother in Beautiful British Columbia and tonight is the first opportunity I've had to catch up with blogging.

What a city this is! I love it and thanks to Vancouver Brother's willingness to squire me around town I've seen a lot of it. I've travelled in work van and car, on bendy bus and sky train, on boat and ferry, in cab and gondola and, best of all, ski lift up Blackcomb on a hot and still summer afternoon. My only disappointment was that I did not see a bear. But I did see lots of bears at Vancouver Pride last Sunday.

The Brother likes to get out and about so I've been to Whistler, Squamish, Hope, Fort Langley, New Westminster (full of bridal shops and stevedores), Burnaby and Vancouver Island. Around Vancouver I've been to lots of interesting places including Canada Tire, Bert's Automative on Kingsway, the city dump, Value Village, most of the sites he's worked on in the last twenty years, every street he's ever lived on and the Dundas Cafe, of which more later. We've done some other stuff like the Museum of Anthropology and a night on the tiles over in Gastown drinking beer and shots until three in the morning.

I've eaten Vietnamese, Indian, Canadian salmon, blueberries, Cuban and fish and chips (at the Dundas Cafe, of which more later). I've caught up with lots of extended family and met a lot of new people too. Did I forget to mention that the folk around here are so polite and friendly?

There will be more about this when I get back to Cully and get my photos sorted out. The Brother has very primitive computing facilities here.

And if you're wondering about the post's title - it's a long story from the Brother's past, very silly and hardly fit to print but every time we say it to each other we just crack up laughing.