So - after a fortnight's shopping, cooking and freezing I was pushed out of the kitchen at the last minute and Bert took over. I already had the oven loaded with the children's food, pigs in blankets and shepherd's pie. By the time I realised what was going on Bert had all my gorgeous food back in the freezer and the adults also ate pigs in blankets. I think one of them might have got a portion of the shepherd's pie. They also ate some kind of a lacklustre salad, something entirely vile called 'chicken balls' and some insipid naan bread courtesy of Mr Asda. No one got to taste my vegetable curry, Bulgarian chicken or my spicy Caribbean beef. My parboiled potatoes were not roasted. My home made garlic bread was barely tasted. They didn't heat up my delicious red cabbage and no one fancied it cold.

What was I doing while Bert was barking orders in the kitchen? I was conducting wine tastings with some carefully selected and appreciative people, the kind of people that do not eat Asda chicken balls. I served the damson first, They were in ecstasies. Then it was the blackberry and raspberry. It was pronounced even better. By the time we were on the raspberry they were in country wine heaven. Swisser even offered to give me high sums for the rest of it. I told her it was beyond price. 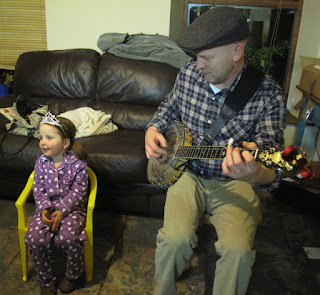 Best bit? Miss Martha singing 'You Are My Sunshine' accompanied by Marty on the banjo.


Worst bit? When Jazzer got her mitts on Bert's clarinet and created a racket that sounded like a large drake in a bog being run over by a John Deere tractor.
Posted by Nelly at 9:36 pm 5 comments: fourpups, originally uploaded by NellyMoser.
These four will be under my feet this Christmas. They will be almost ten weeks old. Big enough to try a bit of turkey.

Oops! Must race. The oven timer is bleeping again.
Posted by Nelly at 10:42 pm 7 comments:

Pot, Kettle And All That Sort Of Thing

Today Bert called me a hoarder. He said,

You know, you're a hoarder.

I know. And so are you. State of those sheds.


He did not reply.

The reason for this? He was clearing out his a cupboard in his room and was about to bin several boxes of his mother's memorabilia, old letters, postcards and the like.


Ah. Sure I gave her a packet of them. That'll do her.


Later on I went into her and she was poring over old letters and cards. I said,

There were more of those. Bert put them in the bin.

Ach! They bring me back memories.


I borrowed her tool for lifting items off the floor and retrieved as much as I could from the bin. Luckily they were newly emptied so there was little else in the bin. She passed the afternoon with them.

Bert's sheds are packed with stuff. I expect most of it will come in useful some day. There are a lot of potential projects out there. The thing is, he'd need to live to 150 years old to complete those projects - if he could be arsed.

He keeps stuff, I keep stuff, his mother keeps stuff. I had a debate with her this morning about whether she should keep an empty plastic soft drink container. She desired to decant her Lucozade into it even though Lucozade already comes in a plastic bottle. She is saving the tops of plastic bottles because she believes that somewhere there is someone who can turn plastic bottle caps into wheelchairs for needy children. I have told her that this is a crock of nonsense but she does not believe me. Yesterday we had a small argument about keeping bottles of spent medicine.

When Pearlie was up and about she collected and hoarded on a larger scale. She still does it although her lack of mobility prevents her from being really serious about it. These days it is newspaper clippings, bottle tops, over the counter medicines and postage stamps. Sure what is the harm? She's done it all her life, it's part of who she is and it doesn't really impinge on our lives.

I collect books, china, photographs, fabric and kitchen equipment. The books and china do take up a lot of room. Bert collects wood, maps, trees and boiler suits. We're all every bit as bad as each other. But he has sheds. And fields.

Back in the 1970s Northern Irish bars stopped serving drink at 11pm and you were out the door at 11:30pm. If the publican or bar staff did not comply with this rule they could expect a visit from those big lads in green, the Royal Ulster Constabulary. But when you're in your teens or twenties and you're having a good time you don't want to go home before midnight. That is why if Kevin was around we'd often end up back in Meadow Street. Kevin, God love him, did not have the usual family thing going on, his Mum was dead and he lived with his Dad. Ned was a real character who usually spent his weekend evenings drinking in O'Rawes, a pub which, for some reason, didn't seem to have an obligation to close at the usual time. Ned would roll in some time after midnight in the best of form and, if he was in the mood for it, call in to see who was around and have a bit of craic with the company. Though not with me, for I was heart-feared of him.

The Wee Manny and a friend

Kevin had a wee terrier dog called Trouble. Trouble was also a character and danced only to his own tune. He had a back leg missing due to a brush with a moving vehicle but it never kept him back. The leg he lost was the one that he used to balance on when he needed to piss. You'd have thought he would have swapped balancing legs but not Trouble. Instead he somehow managed to balance on his two fore legs while he lifted this one remaining back leg to make his water. It was a sight to behold. Trouble was not one of those dogs who bothered himself with people and while he was prepared to tolerate the weekend invasions of young post-pub visitors he would not take kindly to being petted or stroked. Indeed he would have taken the hand off anyone who would have tried it.

Ned could be sharp too. Sometimes after he'd gone to bed he'd rise again and come down to us and order everyone out of the house. The thing to do was to look down, stay quiet and allow him to grumble himself back to bed. Nobody ever left. Oh - many the good night we had there and even the odd bad one too. 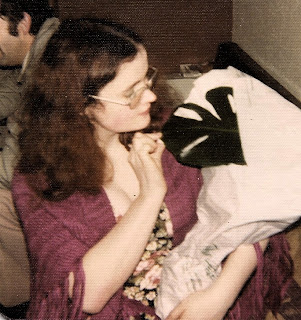 Christmas Night 1976 and I'd just been dumped

I remember one Christmas time when the bars had been packed and afterwards Meadow Street. Someone, I forget who, had a bit of hash and he rolled a joint. I was anxious to give hash a go for I'd never tried it before. The joint made its way around the room, everyone taking just a few drags. At last it reached the girl next to me. I was so excited. But she smoked and smoked and eventually finished it and stubbed it out. Then she remarked, “I don't know what people see in that oul stuff for it never does a thing for me!” I had to wait a while longer for my first smoke of a joint.

A few weeks ago I passed by Meadow Street and I thought of the scores of evenings we trekked there after the pub, not wanting the evening to end. And I thought of a tale that a musician friend had told me. Way back in the 1960s Cream were playing in Ireland. A local music promoter was driving them around and invited the band to stay in his home. The story is that Ginger Baker and Jack Bruce took up his kind and hospitable offer. But what of Eric Clapton? Apparently he was so wasted that he spent the night sleeping in a van in Meadow Street. I'm sure he wasn't the last.
Posted by Nelly at 11:44 pm 2 comments: 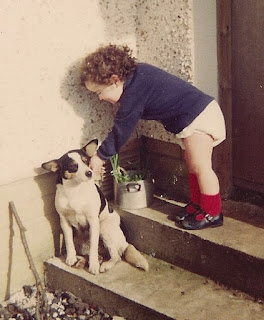 That was the day you strolled down the Murphystown Road to hang with Auntie Sheena. You might have mentioned to us that you were going to call on the neighbours.

Tonight I have rather pungent hands. First of all I moved a chilli plant from this room to the kitchen. It is on its way to Pearlie's room a.k.a the warmest room in the house. Under the bright and unforgiving kitchen lights I noticed that the plant was hooching with greenfly. So that's why it isn't doing very well. On Bert's advice I attacked it with the garlic infusion that Zoe made for the pups. But the spray doesn't work very well and the strong garlic water ran all over my hands. I needed to wash them very hard as my next task was preparing eight pounds of oranges for wine.

After that was done I gave the chilli another drooking with the garlic spray. My hands now smell of orange peel and garlic. Interesting combination. I am now repellent to greenfly, mosquitoes, ants and vampires and shall sleep content tonight.
Posted by Nelly at 11:26 pm 2 comments:

The other evening I sang Martha a made-up song about a rat then promptly forgot all about it. A few days later she said,


I can't even remember the tune and I don't recall any of the words except I fancy that there was a cat that met a horrible end. I vaguely remember thinking it might have been rather a bloodthirsty song for a three-year-old. But I was consoled when I considered that a jaunty tune takes the edge of many a gory tale. So - a jaunty tune, a sliced up cat, a vindicated and heroic rat.... 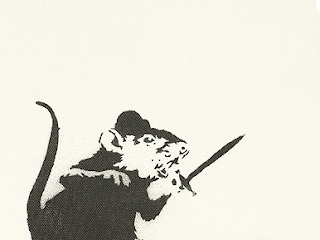