This is Mr Blackbird earlier this evening singing as loud as he could to drown out the Dreen Road traffic. This picture was taken from ground level. He is sitting at the very top of a very tall and dying ash tree. 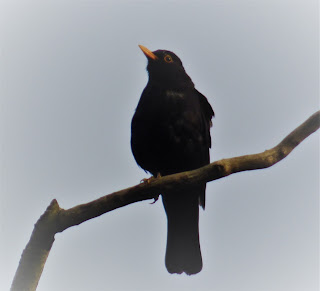 Four days now since I fell out of the treehouse and there is something to add. Two feet, for the drop was twelve-foot, rather than ten.

Every day I'm a little less sore than I was the day before, and yet...

On Day One I was super-hyped on adrenalin and glad to be aliveness. The pain was almost a joy to me because I had survived the fall with no serious injury.

Day Two was more of the same but with less pain.

On Day Three my left breast was really sore. As always, I went to That Place. Then Bert noticed that there were a lot of butterflies in the garden. Mostly Small Tortoiseshells and a couple of Red Admirals. I grabbed my camera. 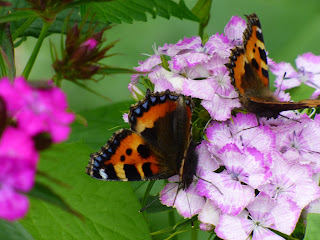 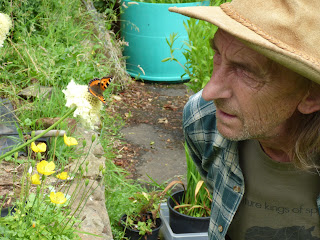 I spent a happy half hour taking pictures. And afterwards, the breast pain had completely eased. Not cancer then, just boob whiplash.

Today, Day Four. Just one sore area, somewhere under my left shoulder-blade. It was really annoying, much less bearable than Day One's multiple pains. I succumbed to pain relief even though it was against medical advice.

I have been thinking about the fall and have figured out why I got off so lightly. My legs must have got caught up in the trap door cover so than when I landed on the ground I only impacted my shoulders and upper back. My head, lower back and limbs were entirely unhurt apart from abrasions and a big bruise on my right arm where it caught one of the wooden struts holding up the platform. The strut broke, my arm did not. Zoe said I'm as hard as nails. I hope she's right.

Today I took some pictures of our flycatchers. Himself sitting on the sumach outside my window. 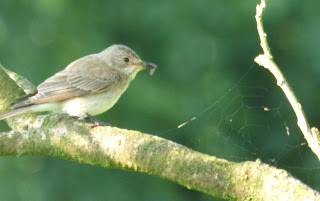 Herself sitting on their second clutch of eggs. They are a busy pair. 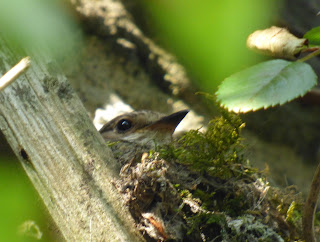 I might go out now to see if I can catch a glimpse of the long-eared owl babies that are hopping around the big trees at the back of the sheds. That is the second pair of long-eared owls that have nested here this year. One pair in the middle of the wood and another pair nearer the house. The young ones kick up quite a racket after dark.
Posted by Nelly at 10:26 pm