Something happened last night that made me very happy. I went out at dark to check for activity around the moth trap and heard the cries of long-eared owl chicks calling for food. At least two, maybe three. So I fetched a lamp and went out in the direction of the wood. An almost full moon, the company of two dogs and a cat and all I had to do was follow their calls. I turned left into the wood, down what I call 'the track' and they were so near. A flaff of wings, as an adult broke cover and the owlets became silent. I turned on my heel and withdrew. The chicks calls resumed. I couldn't stop smiling. I saw nothing, I heard everything, I knew they were there. It was magical. 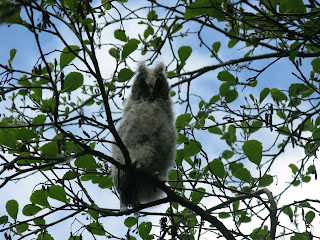 My own photograph taken in 2009 when the owls nested in Scots Pines close to the house but as the wood got bigger they withdrew further away. Wise owls.
Posted by Nelly at 10:35 pm

Email ThisBlogThis!Share to TwitterShare to FacebookShare to Pinterest
Labels: owls

It makes up for a lot.