Matty was not a maker of jam but as children we never wanted for home made preserves as the other mothers were forever producing vast quantities of jams made from blackcurrants, gooseberries, plums and, my favourite - rhubarb and ginger. Jam would be made from the most commonplace fruit, the fruit that grew in almost everyone's garden in great quantities. Rarely did we have raspberry and strawberry jam for these fruits were grown less and were more prized. Actually I cannot think of anything more horrible to do to delicious raspberries or succulent strawberries than to turn them into a dreary jam.

Like my mother I've not been keen on jam making. Like her I prefer to use fruit to make pies, puddings and crumbles. And when I'm not making sweet desserts I will be making wine. But then there are fruits and that do not lend themselves to wine at all. Fruits like chillis. Our friend Les has been giving us little pots of delicious chilli jam for some years now. Then last autumn he gave me a well-grown chilli plant which I planted it in the poly tunnel and hoped it would not die. It survived and, this year, produced a good crop of waxy red fruit so, obviously, I had to make my own chilli jam.

I've been putting the dread moment off for over a week now but had to do it tonight before Now I'm sitting here with hot, chilli-burnt fingers waiting for the jam to cool for it was runny when I put it into the jars – so hope it sets, hope it's not too hot. 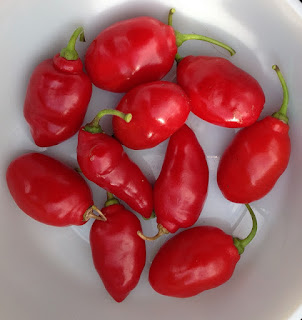