I'm home alone. Pearlie has gone to one of her regular respite placements so that means two whole weeks without a batallion of carers tramping in and out. And it is also two weeks without her constant griping and complaining. It is a chance for Bert and I to have a taste of what it must be like to live as a couple in privacy and peace. Eight whole weeks a year we get of this and I know that makes us very fortunate people.

As I said I'm home alone. Bert has gone off to Malin Head with a couple of friends. I hope they get reasonable weather and aren't blown off the Head. I've been left with the chickens, the dogs, the pigs and the cats - not too burdensome. Clint has been left with the cattle. I'm supposed to be watching and listening for one of the heifers 'looking away' but we're not holding out much hope. The beast has had numerous goes with A.I. and a good run with the bull and she just can't catch. Clint came in to talk about it. He knows Pearlie isn't here so I've got nobody to moan at me.

Huh! The only place that one will be looking away at is the abattoir. She's far too big a baste to be keeping as a pet.

I interpret this as a dig at the kune kunes but I do not react. He goes on.

Aye! It's the freezer for her, no question about it.

I'm sure he'd like me to get sentimental about her so he can come over all manly and practical and farmerish but I do not give him a chance. He goes on,

Did Bert ever get the bags sorted out for the butcher?

I concur that if he did, I have not been informed of it.

Huh! He's an easy-going boy waltzing off to Donegal in this weather and no worries about the butcher! And in November! Sure it's wild up there! He has little or no sense. I don't know what would take him up to Malin Head at this time of the year!

I remark that I thought the break would do him good and mention that we've got a piano.

Aye! I saw that. I don't know what you thought you needed that for. Huh! What with that oul squeaky clarinet and dinnilin' away on an oul out of tune piano that'll hardly do him much good. It would answer him a lot better to finish that ranch fencing he started.

I have to agree that Bert has a rather dilatory attitude to general chores.

Well! I'm away down to get my own livestock foddered and in before it's too dark to see.

I bid him goodnight.

When he is gone I say to the dogs for there is no one else to say it to,

Y'know – there are a lot of things that Bert is good at, that Clint is not.

And I smile a little smile to myself. The President, originally uploaded by NellyMoser.

Is life less interesting than it was now that I don't work any more?

This I know - I don't seem to have the urge to blog as much as I used to.

I met two former work colleagues for lunch yesterday and a very pleasant two hours it was. It was really good to catch up with them but nothing I heard about the world of work made me regret leaving.

Afterwards I went to 'sign on'. My six months is up and I no longer get the 'dole'. I'm doing it for N.I. contributions now. Even so they put the pressure on as to why I am not in employment. I got ticked off for going to England. Apparently 'claimants' have to inform them if we go on holiday. And, I was told, if we go over the border we have to sign off and sign on when we return.

Don't believe that people on the dole are living in luxury. All I see when I go there are sad-faced and despondent people of all ages. Their clothes aren't great either.

Email ThisBlogThis!Share to TwitterShare to FacebookShare to Pinterest
Labels: dole 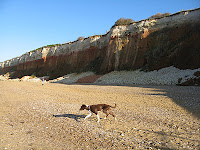 Judy's first proper holiday. I think she liked it. The Norfolk folk (that sounds strange) certainly liked her.
Posted by Nelly at 10:42 pm 2 comments: I wonder where those boots are now?

I did, eventually, throw them out and now I wish I hadn't. Don't tell Bert! 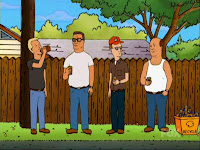 Normal blogging will resume soon. I am currently domiciled in the fictional town of Arlen, Texas. I try to keep to a minimum of 2 hours a day otherwise Hankrot starts in.
Meanwhile I could be blogging about such interesting subjects as,
I think I'll go for #5. What do you think?
Posted by Nelly at 9:32 pm 2 comments:

Email ThisBlogThis!Share to TwitterShare to FacebookShare to Pinterest
Labels: KOTH I wonder if it is time to get Bonnie a new kitten?

In Search of the Perfect Demi John 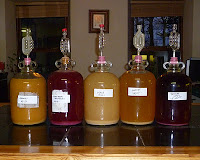 Today Nellybert girded their respective loins and headed for the big smoke. Our destination was Nature's Way on the Upper Newtownards Road. I told my wine making chum Bilrus that we were heading in that direction and asked him if he needed anything. He did not. Afterwards he called round and was most impressed with my tableful of gleaming brand new demi johns, bubblers, corks and sterilising powders. He said.

Great shop - but they're a bit snobby.
Snobby? You think so?
Yeah. Good looking dark bird was it?
Yes. I thought she was lovely. Not one bit snobby.
I thought she was a bit 'Bang-or.'
Not-a-tall. It was just that you are such a big gorgeous lump of a man. Reeking of pheromones. She was just trying to control herself. That's what came across as snobby. Me? I'm just a little old lady. She had no problem with me. Lovely girl. Not a snobby bone in her body. Mind you - I'm in there in a flash, spent a hundred quid, straight out again. Sure what's not to like about such a customer as myself?

Of course I had to check the Belfast prices with my favourite internet supplier. Happy to report that Belfast was far cheaper for good quality glass demi johns.
Posted by Nelly at 9:08 pm No comments: These pictures were taken five years ago soon after Bonnie came to live with us. It was probably the first time she ever engaged in play because, as I remember, she didn't really have a clue what was going on.

All those dogs, apart from Rosie the collie, are still alive but they are all quite elderly now.

Last week Bonnie had an operation to remove a growth from her leg. She seems to be doing well. Our biggest problem is getting her to rest. Given half a chance she's out in the yard or on the lawn playing and mucking about with the other dogs.

The dogs' playground is where our poly tunnel stands now. No boisterous ball fun allowed in there these days!

At last! A proper Autumn day - dry, crisp, mellow. I picked a pound of Autumn raspberries today - straight into the freezer with them. I must learn to make Pavlova. Cousin Margaret is an expert - I shall insist she gives me a tutorial.
It's been an anxious day waiting for Zoe to have the baby. Today was her due date but, so far, no action. Also anxious because Bonnie has started limping badly. Off to the vet with her this evening where we saw the same vet we saw last time we were there which was a mere month ago. Or maybe it was her identical twin sister. Last time sore on foreleg probably cancer, here's some ointment, she's too old to operate on. This time same sore on foreleg, giving her a lot of gyp, she's a fresh looking old girl, we'll operate. Tomorrow. I wonder if I'm doing the right thing?
I considered taking her to my cousin the vet but I expect he'd operate anyway. Hope I'm doing the right thing.
Posted by Nelly at 9:29 pm 3 comments: