The End of the World As We Knew It. 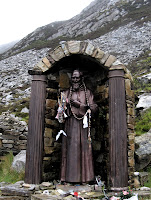 It was in October last year that Nellybert went to Donegal. To say that the trip was disappointing would be no exaggeration. We decided to give it another try.
The weather was not as good as it had been on our last outing. But that was in October so, of course, you'd expect it to be glorious. You cannot look for blue skies in May and they turned out every bit as grey as you'd imagine.
We sat at Five Fingers Bay where the tide was in. I scrambled on the shingle to collect wee square pebbles to fill in the spaces in the paths where the Bann brick is crumbling away. Bert sat in the van and watched as the tide started to go out again. He said he'd never seen such a thing before for he doesn't get out much. I said if he noticed it going out really fast and far we should jump in the van and race for the hills as it would mean a tsunami was coming and we were expecting the end of the world. Strangely I wasn't that concerned. If the end of the world comes, it comes.
The gloom of the weather did not perturb us and we headed for Doagh Famine Village which turned out to be a most interesting and entertaining experience. Deserves a post of it's own really. I might call it 'Play Down The Famine' Village which was a new and very interesting view of the National Tragedy. Can't say I disapprove.
The weather did not improve and we drove to the Mamore Gap, stopping at the famous shrine where I prayed a bit and made a small offering. I thought I was praying to St Colmcille but it turned out to be Padre Pio. Apparently he comes highly recommended by those in the know. So Ganching, if something good happens to you next week - let me know and I may start my own shrine to Padre Pio on the Dreen Road beside our wee spring or Holy Well as I now call it.
Posted by Nelly at 9:51 pm

Found the Village Tour interesting. I'm leaning toward thinking my Father's great-grandparents may have come to NY through a Poor Law Union in 1852 so I've been doing a bit of reading up.I love the roads that Genealogy take me down!

Do you know where they came from?

I'll try to keep this short. My Grandpa never discussed his life in my presence -but I've pieced together quite a bit.

My feeling is that they came from N.Ireland. It looks as if 4 arrived together. The Walshes along with daughter & son-in-law, Joseph Mallen in 1851. Then a Samuel Smith, who was my father's grandfather arrived about 1870 and married the Mallen's daughter.(All 3 of the men were billiard table makers).

Samuel died when Grandpa Smith was 4. By 1897,his mother had also died & Grandpa went to work as a runner on Wall Street when he was 12. I think he may have lived with some of the Mallens by then. He spoke Gaelic -but not to me except once when he was upset.

I just learned the emigration date a few weeks ago- the US 1900 Census was the first that asked for a date and Terressa Mallen was still alive. I feel like I'm getting close now...

Walsh is a common enough name here. My mother knew people of that name. We would spell the Mallen name as Mallon but spelling was not that particular in the days when not everyone could read. Sometimes it took officials to tell you how your name was spelled.

Indeed, I have seen Mallon and Mallin even within the same family and always allow for variations when searching. Add that to the "officials" who made the entries who could not spell, whose handwriting was atrocious and the poor condition of some of the records -and knowing the attitude toward immigrants, I think some just didn't care.(My Dad remembered the signs:"Irish need not apply" when jobs were hard to come by).
It may sound odd - but the beauty and heartbreak that shaped my family is what I'm trying to understand in the end.