I'm finding this oul blogging lark hard going these days. In days gone past I'd be tootling about my daily business and thinking about all kinds of things to write about - these days, not so much. That's why it's great having an archive. When I can't think of a single thing to write about I can always plunder the archive. It seems that 10 years ago we were having this house renovated and were yet to move in. I also noted that 10 years ago I was a good deal more likely to write posts that might hurt people's feelings. Perhaps I should get back to that style of blogging. 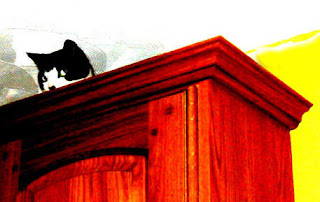 The only thing this picture has to do with today's post is that it is from the 2005 archive. Poor Harry de Cat. We miss him still.

I was hoping that the most eventful happening of the day would have been my boss causing me to suffer bloggus interruptus. It was during my lunch hour but there was no way he could be sure as he wasn't there when the hour started. And I was in the middle of a really good reply to CyberScribe's spooky comment about Cully pubs. How does he know? Where is Greyabbey anyway? Oh Bert's just told me it's in County Down. So the muse deserted me and that's why my eventual reply was so lame Cybe ol' boy.

So that's my quota of italicised words used up for this post and from now on I will have to manage without them.

On returning home I decided to go and inspect the work going on in the new house. I was especially interested in seeing how the kitchen tiles looked and also wanted to see the flight of stairs leading to the attic floor. Seamus the joiner started on them yesterday and they were pretty much finished. There is a little health & safety type issue at the very top which I wanted to take a look at so I asked Seamus if they were safe to step upon. He gave the go ahead and I had my foot on the bottom step when James the electrician nabbed me with a query about the lights I headed downstairs to the room where Matthew was tiling. Matthew says,

We were just coming to terms with this disaster when the joiner's apprentice came in. He says,


"Where's Bert?"
"Down the road. What's up?"
"Seamus has cut himself with the electric saw."


And so he had. Apparently it had stuck and he was trying to dislodge it when it had jumped back and gouged a lump out of his knee. Both Matthew and James were urging me to take him to the local GP surgery. Feck's sake! These lads must think Dr Finlay practises in Cully. I said no for the first thing the local GP would say is, "you'll need to go to casualty with that" so that's what we did. Seamus was very stoical about the whole episode and says he'll be back at work tomorrow. They breed real men in Dunloy.

By the way that policeman is still reading my blog. He phoned me yesterday in his professional capacity and before he rang off he said, "Are you still off the drink?"

Meanwhile in the present world Nellybert took a walk up the back lane at dusk and spotted Foxy's big red arse disappearing into the wood. We had interrupted his supper of fat pigeon. He took it with him, leaving the wings and a shiny, black poo behind him. Judy did not roll in it for which we were truly grateful.
Posted by Nelly at 10:11 pm

It seems your last two entries have blended into one. That'll do tho. Any entry is better than no entry. I'm flummoxed about making entries myself.

The middle part is my archive entry. I should have used a different font.