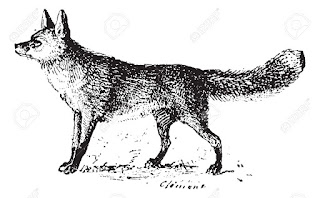 While I was away Bert had an interesting encounter with Foxy. On that day the big field had just been cut for silage so he gathered up the .22 and headed out the back lane to see if Foxy was out catching frogs. And sure enough, there he was, sauntering through the freshly cut field.

Bert crouched down behind the hedge and raised the gun. He had the vicious chicken killer in his sights. Judy and Jess saw Foxy too, sat on their haunches and stared at him through the five-bar gate. Foxy sat down and gazed coolly back. And all Bert had to do was squeeze the trigger. He waited, and waited. The dogs watched the fox and the fox watched the dogs. He was the same dark red fox that had been in the hen run, the same big fellow that Bert and the dogs had spotted a few times previously.

We don't know why Judy and Jess don't go after him. Perhaps he mesmerises them. Maybe he is even that same fox that Fred encountered on the back lane five years ago.

Then Bert stood up and Foxy got up too, looked at the man with the gun then turned on his heel and trotted back to the woods.

Bert is not entirely sure why he didn't shoot Foxy. A good few of our friends reckoned he should have squeezed the trigger and about as many again said he was right to let him go. He felt he made the right call. I think so too.