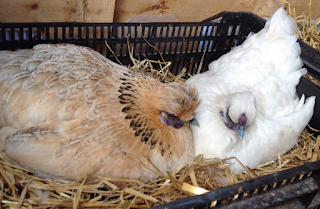 Despite having attained a great age I have to admit that I know very little about broody hens. Apparently Pearlie was a great expert and by dint of being her son, Bert considers himself an expert too.

The big hens rarely troubled themselves to sit on eggs but these bantams, Honey and Flour are at it all the time. The first few times they tried it Bert advised that they be set under a box, kept in the cold and dark until the broody notion left them. I thought this very cruel but it worked. The reason they weren't left to get on with it was because the weather was still very inclement.

But spring is on the way and when Flour made a nest and started 'borrowing' the other hens' eggs I thought I'd leave her to it. She sat nicely for about five days and I never thought to mark the eggs. Every day there would be at least one more egg added to the clutch. Then one day she raced out to get food and when she returned Honey was sitting on her eggs. There were seven by now and on Bert's advice we marked them. They are both sitting side by side and the number of eggs under them changes daily. Sometimes Flour has the most of them, usually Honey has them all. I lift the unmarked ones every day and get soundly pecked (by Honey) for my trouble.

Hopefully we'll have chicks before Easter and (fingers crossed) that they will survive. 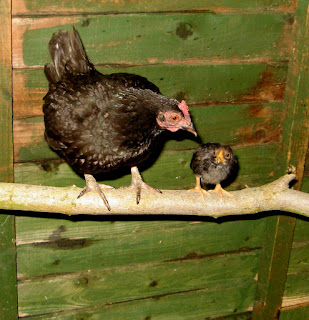 Unlike this one. Bernie was really old for a bantam and we didn't even realise she was clocking until I heard cheeping coming from the boiler shed. The fox got Bernie and the chick didn't survive. It tootled around on its own for a day then disappeared for those were the days when the chickens ran about the yard. That was nine years ago. 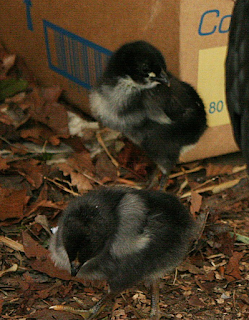 These two belonged to one of our Jersey Giants. It was July 2013 and I looked after them so tenderly. Then I went to Vancouver and instructed Bert to mind them carefully. He did not. Jess killed one of them and a buzzard (probably) got the other one.

So I'm cautiously optimistic about these Easter chicks but I'll take the wise woman's advice and won't be counting them until they hatch. Maybe there will be a yellow one. I do hope so.
Posted by Nelly at 10:20 pm

We always gave the fertile eggs to the banty hens, as they made the best mothers.
When I worked in the feed store spring deliveries of all the chicks, goslings,and poults was exciting.

Still no sign of chicks. If they are going to hatch it has to be soon.