Bert had a tough day yesterday. First of all he had to move the herd, all seven of them, from one field to another. This involved shunting them out of one field, crossing a busy B road, and shunting them into another. He had at his disposal three sturdy cow hands, Les, Peter and myself. Les was in charge of halting the traffic at the Portglenone end, I took care of the Cully side and Peter and Bert gathered them up. That was the plan anyway. One of the 'bastes' was a visitor, a young bull belonging to Clint - that was in with our lot to act as a teaser. A young Lothario there to help Bert figure out when the girls were ready for the AI* man. And he was a teaser all right. With no intentions of doing the right thing he made a mad dash for the hedge and charged through a barbed wire fence into another man's field - and the two calves along with him. Meanwhile the cows were all in the new field enjoying the luscious grass. Peter and Bert did their best but they hadn't a hope. We brought one of the cows back and eventually the calves joined her and back to the luscious grass they went but no sign of Clint's bull. Bert tramped the fields but no sign of the teaser. He had to tell Clint who, it turned out, took a philosophical view of the matter.

They both went out to look for the bull, Clint driving the roads and Bert tramping the fields in torrential rain. At last the bull was found and penned and Clint drove off to get a trailer. Bert trudged home, soaked to the skin. He had just reached the end of the lane when one of the neighbours stopped him, a trim woman in her fifties, driving a smart little car. She called him over.

Bert, I was meaning to ask you. What are you doing about the trees?

The trees? What trees?

The wood. The wood at the back of our house. What are you doing about it?

Nothing. Why do you ask?

It's just that we were told it was only going to be there for fifteen or twenty years and now we can't see the road or the nice green fields. All we can see are those trees. We all hate them.

Well I have no plans to do anything with them in the near future. They'll be there for a while yet.


Bert was disconcerted about this exchange. It never occurred to him that anyone would have a problem with the wood. He loves it, loves the wild life that lives there and is delighted that bluebells are beginning to flourish in it.

He told Clint who was practical as always.


Huh! If she doesn't like it she should move house. It's the countryside. Things change.

Later that afternoon the AI man turned up. Not Henry VIII this time, his brother Prince Arthur. He'd been caught in a short, sharp hailstorm where big chunks of ice had hit his car. We could actually see where the paint had flecked off. That made the downpour we'd had seem like a treat.

It faired up later and Bert took four dogs and the wee grey cat for a walk in the woods where they saw a fox. It wasn't a bad end to the day but it made me nervous for the hens, especially as he'd spotted fox cubs earlier whilst tramping other fields looking for Clint's young bull. 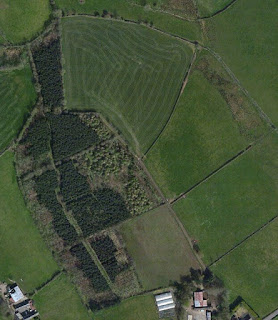 How can anyone not like a wood? If you want to see fields, move to where that's what you get, and stop trying to remake the world for yourself.

Some people feel so entitled! Before cutting trees that help the air we breathe and provide habitat for all the creatures, perhaps she should read up a bit on woods and what they do for us.

Interesting to hear of how others work/move cattle. As for the lady that doesn't like the trees... if those trees are on your property she needs to shut it. Your property is yours to do with as you see fit. Geez.

I entirely agree Ronni. People who don't like trees are ignorant idiots.And Brighid, you'd find it crazy here. Everything is so small and busy. Tiny little fields, hedges and barbed wire everywhere. The place where the bull was found is less than ten minutes walk from here and I never knew it existed. We can see nothing for those damn trees!