If I'm only going to write this blog when I have interesting thoughts or experiences then I'm not going to be writing it very often. That being so, I have decided that from now on I am going to report on mundanity and tedium until the cows come home. Who knows, some may even find it mildly interesting.

So, shall I start with this morning's dreams or my current method of menu-planning? Definitely the dream. I'll share the one where I attempted to enlist with the Parachute Regiment. This is something I'd never wish to do whilst awake but in Dreamland it seemed like a terribly good idea. I went along to the recruiting office where I was interviewed by one of those English military types, tall and thin, wearing slacks and a regimental blazer and sporting a little white moustache. He was awfully polite and turned me down on the grounds that my fitness levels weren't up to scratch. Nobody mentioned my age. I was thanked for coming and offered a lift home but I declined saying I had my bus pass.

I got up at seven o'clock, attended to the chickens, then put the kettle on.  My next task was a visit to the downstairs bathroom. As I sat there pondering my narrow escape in Dreamland I heard this crunching noise,  looked to the left and there, sitting in the corner was that big ginger bastard Fred, eating a pied wagtail. Not a pleasant sight. Feathers everywhere and he'd already demolished the head. I tried to forget it and made coffee. I'd clean the birdy mess afterwards. Coffee upstairs but before I even took a sip I stepped on my new scales. Three pounds lighter than yesterday. This was unacceptable. I stepped off, got on again and was only one pound lighter than yesterday. Not too sure about these new scales. I've dropped twenty pounds since January but when the old scales packed up the replacement  ones immediately showed me a gain of six pounds which took the nice look of my spreadsheet chart. 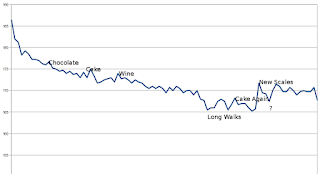 So much drama and it wasn't even eight o'clock! But at least I didn't fall off the back step like Monday, two weeks ago. The black eye has almost disappeared but the staved left hand is still a little achey.

Hah, I wonder what brought on the parachute dream.
Out of sorts here as well. My blog has become the trash bin of my mundane life, sigh.