Many years ago when I lived in town I had these very unexpected visitors. Mick, my first husband, was at work and myself and the girls were all at home. I was washing dishes and noticed a parked car with at least four adult occupants. It seemed out of place at nine o'clock in the morning but I never thought it would have anything to do with me. Then the door knocked and there on the doorstep they all stood, the occupants of the car, and the tall bearded one was brandishing a piece of paper which he said was a warrant to search my house for drugs. He might have announced it differently but that is how I remember it. They were one woman, three men and a golden labrador. The woman sort of herded the children and I into the living room while the men and the dog set to searching the house. Katy, who was about six, was very excited about the dog and wanted to know if we could keep it. I was worried. About a year previously I'd held a party in the house and someone had cannabis and I fretted that there might be a fleck of it left behind for at that time people were being charged and taken to court for very small amounts of hash.

The police officer who was 'guarding' us attempted light conversation. She noticed some unfinished patchwork I'd been working on and talked about that. Apparently she had an interest in needlecraft too. I couldn't really engage with her for worrying about the untidiness of the home that they were rampaging through. At last the bearded one appeared. He asked me to come into the kitchen. My heart sank. Had they found cigarette papers, a grain of dope? No. I walked into my kitchen to find one of the officers holding a house plant. Beardy said,

Can you tell me what this is?


I was amazed and relieved and answered,

It's a plant my friend bought me for my birthday. She got it in a florist shop in Wellington Street. You're joking. You can't really think that it's a cannabis plant?

We're taking it with us for investigation.

Well, I'll be wanting it back and you'd better water it!

A week later I'd heard no word so I went to the phone box at the bottom of the estate and phoned the police station and got through to the switchboard.

Hello. This is Nelly Moser. I'd like to speak to Sergeant Willis please.

I'm afraid he's not in his office today.

Ask him if he has completed his investigations regarding my house plant I'd like it returned please.


The switchboard woman tittered and said,

I'll make sure he gets the message.


A couple of days later the door knocked and there standing on the doorstep was one of my unexpected visitors from that morning, the youngest of them, given the shit job of returning my birthday present. I took it from him and noticed it was light.

This plant hasn't been watered since you took it. It's bone dry.

We watered it every day!

I don't believe you.


A couple of months later my sister and I were at a friend's gig in the  Smithfield Bar and I noticed Beardy Willis and his drug squad chums sitting at the back. I quietly pointed them out to her,

That's the crowd that took my house plant.


They left soon after and the landlady set two drinks in front of us.


And that was that. My dizygotheca elegantissima lived on for a few years but eventually died and was never replaced. It never got to be as big as the one in Belfast's Botanic Gardens. 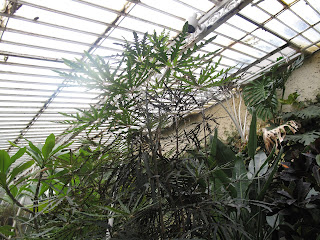 Thanks Nancy. Entirely true too as far as memory permits.

I loved reading this story from the past. Did your plant look anything like a cannabis plant?

Apparently they can be confused and no doubt it was the plant on my kitchen sill that caused someone to report me but it still surprised me that a senior member of the Drug Squad would make that mistake.

What an interesting story, and you handled the situation well.