I find, that when life is full and complicated, it's far harder to make the time to write this blog. So. What's been going on? First of all, I spent a lot of time with small children, the majority of whom were not even related to me! Martha and Evie on Thursday, all day because their school was closed for voting day - then their friends Caitlin, Cara and Maria on Thursday afternoon.  Five girls altogether. 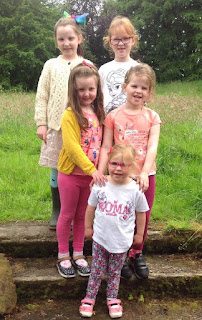 I stayed up late on Thursday evening then got up very early on Friday morning to check the election results. Roughly four hours sleep in all. The results were better than I expected. A hung parliament. Exactly what we needed. No landslide for the Tories, no improved majority, a good slap up the bake for Mrs May. I allowed myself to feel pleased until... this.

Company expected on Friday afternoon, one of Hannah's friends and her little boy. Not quite three, he was a live wire who spent almost the entire visit 'adventuring' with Hannah.

Saturday was sleepover day with the girls. Zoe brought them out mid-morning and we were all very excited. The girls because of all the telly they were going to watch, me because I haven't had them for a sleepover for ages and Zoe because she was going to get some uninterrupted sewing time. She had hardly left when she was back with the saddest news. My brother-in-law had just returned to Kerry after taking a stint on that journey and he had also spent part of three previous summers rowing the naomhóg from Dublin to Spain with Danny, Liam Holden and Brendan Begley.

On Sunday I brought the girls to Cara's party where there must have been at least two dozen children in full roar. I surprised myself by actually enjoying it.

Come Monday I was exhausted. Girls and their parents for tea. I cooked something cheesy and spinachy (Jamie Oliver) that was delicious and Sticky Toffee Pudding (Nigella) that was a bit overdone. Can't wait to get it right as it was still yummy. Monday evening we settled down to watch Better Call Saul and I fell asleep on the sofa and missed the best bit, a scene with Mike in it. Watched it again this morning.

Then to the internet where I found out that a former boss from my days in the hostel in Spide City had died. For so often, these days, that is where we first hear this kind of news. It wasn't a shock for I knew she was very ill and I arranged to go to her funeral. Then Jazzer rang. She had an urgent appointment  in a Belfast hospital and wanted me to go with her for support. I explained about the funeral and she understood. I carried on with my day but something was nagging at me, I felt anxious.  And I did what I always do when I'm anxious, ate a lot of food. Then it came to me - Anne, the woman who had died was a famously kind person who cared very deeply for her friends and family. If I could have asked her about my dilemma she'd have told me not to be so silly and take my friend to the hospital. So that's what I'll do. It feels like the right decision.
Posted by Nelly at 12:38 am

I understand busy with all those kids around. So sorry too about the death of Danny. Yes, it is the right decision to take your friend to the hospital. What a week you had.

You've had a tough week yourself. Hope you're feeling recovered now.