The Night Before Norfolk

Well, here we are - the night before I leave for deepest Norfolk. I didn't plant the daffodil bulbs or rack the wine. I think it's safe to assume that both of these tasks can be postponed for ten days or so.

I did plant the garlic though it wasn't a straightforward task. You see there is this little white hen who can escape her enclosure even though the surrounds are more than eight foot high. I think she flies onto the branch of a tree and from there launches herself over the fence. From then on she does fun things like root through the compost heap, lay eggs in secret, private places, nibble Nelly's chard and uproot her leeks. 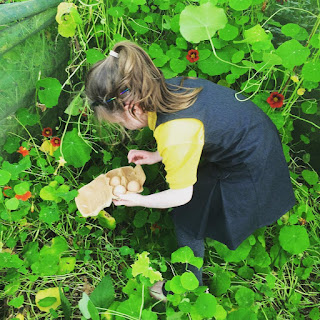 So I planted about half the garlic and went back to the house for more cloves and a wee coffee. And when I got back there was the little white hen who had unplanted it. So a job that should have taken an hour took nearer two for then I had to build an intricate cage around the bed to prevent further incursions. The little white hen tried to blame the damage on the polytunnel robin but I knew that was a lie. Little robins couldn't do that much mischief in so short a time.

Today I started packing and when I got bored with that the girls and I went out to pick damsons. I thought they were over but the Wee came round (just back from four weeks in Vietnam) and informed us that he'd spent the morning making damson jam. Of course, I'll not be making jam as wine is far nicer. We got about six pounds from the tree. Enough for twelve bottles of wine. 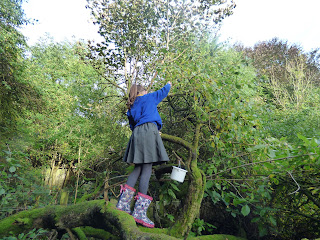 From tomorrow I'll be away from the keyboard. I haven't decided if I'm going to take my iPad. Maybe not. A week away from the internet might be good.
Posted by Nelly at 9:54 pm

We've got a white hen who gets out each day, goes right to the barn and lays an egg in her super secret nest under the stairs. That's it (luckily!) and after laying she goes right back with her buddies behind the fence. She made the nest during their (ill advised by me) free range period and she will NOT give it up! Have a lovely trip :)

If it were me I'd leave the internet, and just enjoy the trip!

Yes, it will do you good, but not us. We will miss you.

Thanks for the comments everyone. I'm back. And Brig, never went near the internet the entire week. Had lots of walks and read two books. It was great.