A Trip To Belfast 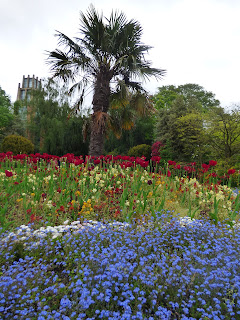 I managed a day out in Belfast today, my main objects being a visit to the newly refurbished Tropical Ravine in the Botanic Gardens, some new reading glasses from Flying Tiger and a present for Bert.

I had mixed feelings about the Tropical Ravine. There is no doubt that it needed the refurbishment, if only for the survival of some of the older plants in there but it has lost much of its former dilapidated charm. Now it seems less mossy, too modern. I much preferred it as it was.

The grounds outside the Ravine have had a makeover too, planted mainly with geraniums. I was pleased to see that I have in my own garden, all the varieties I spotted except 'Rozanne' and I want 'Rozanne'.

The Palm House was in disarray today with many plants pushed to the side for cleaning but the display of pelargoniums on the Museum side was spectacular. Lots of varieties that I don't have but would love to own.

My next stop was the vintage store on Botanic Avenue where I bought Bert two shirts. That was the present ticked off my list.

I lunched in the Linen Hall Library and it was very quiet in there. Then a bit of a wander around the city centre. I got some lace-up shoes I've been thinking about for a year or more and two pairs of readers in Flying Tiger. I was disappointed not to get the apple green ones I bought last time as I've had such a lot of compliments about them. My fashionable niece even advised that I should base my whole look around them.  I still have the apple green ones but Jess, the hallion, jumped on them as I was getting dressed for bed one evening and they don't sit right any more. Three quid glasses just cannot handle being pounced on by sprollies.

There was a bit of time to kill before getting the train so I had a drink in Robinsons. I took it outside and as I sat there I thought of how thirty years ago a person might be taking quite a risk sitting across from Europe's most bombed hotel (33 times in 25 years). Thankfully those days are over. 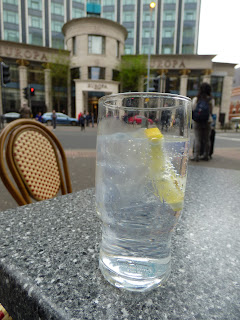 On the train home, I read the book I picked up in the Linen Hall Library charity shop. Letters between Nancy Mitford and Evelyn Waugh. It was rather 'laugh out loud' in parts but so prejudiced against Jewish people. That was shocking. Or maybe it was just Lucian Freud? Still appalling. It was written by a Mosley, so obviously shameless.

I got Bert to try on his shirts as soon as I got home and was pleased that he liked them. He especially liked the denim, a vintage Ben Sherman, so much that he kept it on and went out to clarinet practice still wearing it. That's never happened before and I've been buying him clothes for more than thirty years.

This visit to Belfast invigorated you. What fun. Geraniums galore, and a bombless drink. Wonderful. The shirt best of all.

It was a good day. Set me up for the rest of the week. The weather has been wonderful and I've got lots of gardening done.

I love geraniums. The Cowman's granny used to grow them by the hundreds for the race track in Portland. All from a tiny greenhouse, how she managed it I have no idea.