But they do get easier as time goes on. This is the fourteenth one since he died. The first one was very hard as he died in early June and right from the start the shops were full of Father's Day reminders. I remember feeling ridiculously annoyed and cross about it.

It passed. Father's Day is just another day now. To do with other people, not for us. I had a lot of company this weekend, the Banjos, Dr Leitrim Sister and her husband. Six people, not one of us with a living Dad. Memories were shared.

And here are some more. 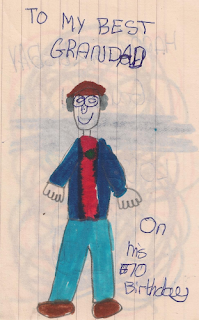 A handmade card that Daddy received from his granddaughter in 1989. One of a series of photographs that my sister Patricia Moriarty shot. They are some of the best pictures ever taken of our father. 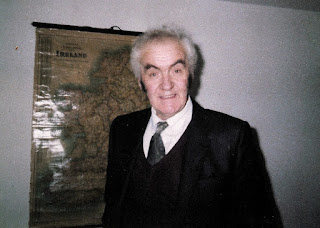 One of my own photographs. I think he might have been calling me an eedjit as I was trying to get him to smile. 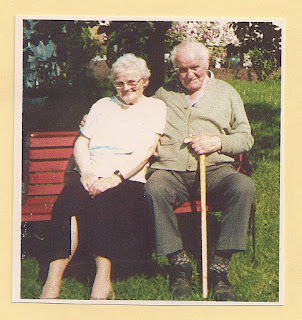 Father's Day is always hard for me as it always falls around the anniversary of my dad's death. He'll be dead 45 years this Thursday x

We were lucky then to have had Seamus around for so long. I'll think of you this Thursday, Martine.

Ahh, your photos, I love them.
As the Cowman, his dad, and my dad have all passed Father's Day is not as celebrated as it was.

What a lovely entry...and wonderful picture of him looking out into the fields.

Thank you, Brig and Mage. It's early days for you Brig, but weren't we fortunate to have had dads in our lives for so long. Mage, those are a great series of pictures. He was a little camera shy but my sister followed him about that day, got him at his ease and captured some precious images that day.