Our environmentalist friend Rachael called round yesterday and had a look around my garden. She was absolutely delighted with the number of pollinators we had. Said it was the most she'd seen anywhere this year. I am pleased with our Don't Mow, Let It Grow trial, not to mention the Don't Weed, Let It Seed campaign. We are rather lucky though as we have enough space around here to have a little bit of flowerbed and grass and still have loads of nettle patches, self-seeding herbs and general weeds to keep the insects happy and if the insects are happy the birds are happy and so it goes on.

While she was here Rachael told me about a farmer in Portglenone who has sowed an entire field in sunflowers with a wide strip of wildflowers surrounding it. He has cut paths through it and welcomed visitors. So, of course, we had to go and see it. 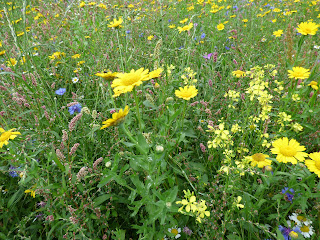 A venture like this is quite a departure for a Northern Irish farmer. As I said to Bert, 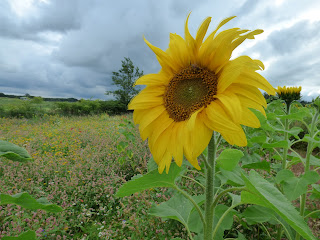 Today they were accepting donations for a local community project and we were happy to hand over a few quid. Sure what else would you be spending it on? 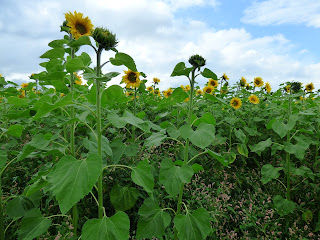 They hope to sell some of the blooms for cut flowers later in the month but Rachael informs me that the most of the sunflowers will feed the birds. 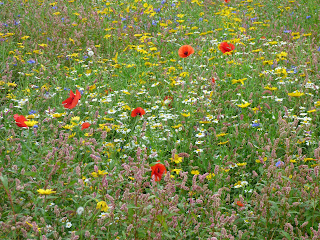 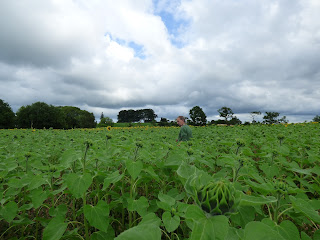 In this part of the field, the sunflowers were still coming on. Where they were in full flower they were as tall as Bert. He's six foot.

I felt quite inspired by it and hope that maybe we can do something to encourage wildflowers. Maybe we won't plant sunflowers but I am hoping to transform our unmown front garden by cutting and lifting in September and seeing what comes from the existing seedbed. Maybe we'll even persuade the Common Blue butterfly to breed in our garden and to enchant us as they did in Paddy's Field in childhood summers long, long ago.
Posted by Nelly at 11:01 pm

It is rather wonderful.

It's the talk of the parish!