Last night Bert, Zoe and I went to Belfast to see a film. To say that the three of us had a fair good idea of what it was all about would be an understatement.


The film was called The Camino Voyage and it was about four men from West Kerry who thought it would be a great adventure to follow in the steps of their Irish ancestors by going on the Camino pilgrimage in a naomhóg. 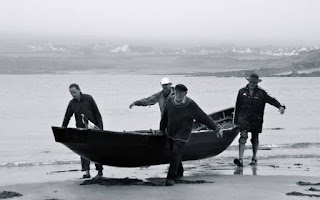 A picture of the four intrepid adventurers lifted from The Kerryman website. It was taken by my sister and they never gave her a bit of credit for it. However, I will. Thanks, Tricia - it's a wonderful shot. One of your best.


Now, as I said, I knew a great deal about the film before I watched it. I had heard about the proposed adventure before the documentary was thought of. I fretted along with the rest of our family as the rowers made the long crossing from Rosslare to the Welsh Coast. Did I forget to say that one of those Kerrymen was my brother-in-law, Brendan?


The journey was made over three years, each stage lasting around six weeks and beginning in May. The first stage took the crew as far as Brittany. The second year they rowed around the coast of France until they got to the Bay of Biscay, at which point they took to the canals and rivers to avoid those treacherous seas. And we were glad to hear it after what had nearly happened the previous year as that tiny boat was crossing the English Channel. I shan't tell you. See the film.

Just as the crew were preparing for the third and last stage of the voyage Brendan got a permanent job offer that was just right for him and he was very conflicted. But he took the advice of a fellow crew member and accepted the post. Brendan's place on the boat was taken by this guy. He brought a lot more to the journey than just his strong back and arms.


Anyway, enough spoilers. Over the three years, I followed the journey on Facebook, heard bits from my sisters, watched the promo, was delighted at the finish, enjoyed the photographs, went to the event at the Ulster Museum to hear the five crewmen talk about their adventures, heard what happened afterwards, sympathised with Tricia and Brendan snowed in for days trying to get to the Glasgow Film Festival in a blizzard, babysat our Joe's dog when he went to see Camino Voyage at the Galway Festival.


And yet, knowing as much as I already did the film was so fresh, so engaging, so beautifully photographed. Sometimes thrilling, often funny, always inspiring and in places very, very sad. Laughter and tears.

Our Brendan re-joined the crew for the last leg of the journey and was there in the cathedral at the end along with his wife and daughter. I felt so proud of them all.


The film should go on general release in October of this year. If it comes to a movie house near you go and see it. You won't regret it.
Posted by Nelly at 11:11 pm

Thanks Nelly. I will look for it.

OH, I will have to be on the look out for this one. Sounds like a good one.