Can't Do Right For Doing Wrong 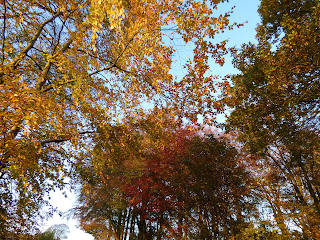 I don't have far to travel to enjoy the autumn colour as these trees, mostly beech, are at the bottom of our lane. 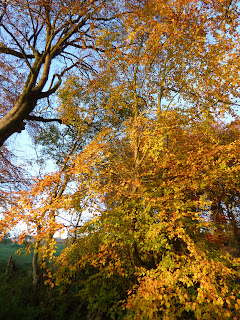 Last week was a free week. The girls were on a mid-term break vacation to the Dingle peninsula so no Monday supper and no Thursday baby-sitting. I have a new regular Tuesday appointment and that was postponed due to vacation time for the other party, so free all week, lots of time to myself.

I spent it weeding, planting and mulching in the polytunnel for my section had got really out of hand. There were dandelions, creeping buttercup and nettles starting to appear. There were far too many strawberry runners and a nest of self-seeded sweet william that was beginning to take over. Over a period of five days I worked on it, lots of hoeing, digging out and raking. Garlic cloves were sown, new strawberries and broad beans planted and fresh compost added to the soil. It was so neat, so brown, so weed-free and I was really pleased with all my efforts, until - one night, about halfway through this clearance, I woke up and couldn't get back to sleep for feeling guilty about where all the beetles and bugs, spiders and frogs were going to live. The tunnel wrens appeared to have lost interest in my plot and the resident robin had moved out. It was all far too tidy.

But it won't last. The weeds will return, so will the bugs and beetles and in no time robins and wrens will be back. And, if those broad beans ever come to anything, Rusty and Lily will be crashing about in there too. 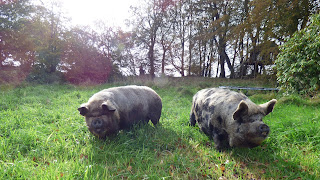 Sounds like you did good....and yes, they will all return.