In the early 1970s, Matty worked in the dispatch department of an electronics factory. I was at home with my baby girl. When she got home she'd tell me all about the goings-on in the lives of the team she worked with. At first, I found these stories tedious but listened to Mum anyway, just to be a kind daughter. Then, as time went on, these tales from the factory floor began to engross me and sometimes I found myself waiting impatiently for Matty to come home so I could hear the next instalment. She'd be taking off her coat and I'd be saying,

How did wee Una get on at the fertility clinic? Did the doctors give her any hope at all?

So! Did Davy gamble his pay again this week? He did! Poor Josie, she'll never be able to afford that holiday.

Since then I've always been interested in other people's jobs, which always seemed more engrossing that one's own paid employment.

For instance, this Thursday, we had someone round who works behind the scenes at big events, concerts, festivals and the like. he mentioned that he'd been working the Cher show at the SSE Arena.

Over 70 and you should have seen her go. Amazing! All those costume changes. I saw her coming offstage and she was totally wrecked. They had to carry her off.

A conversation ensued then about just how so many venerable old rock stars are still giving it welly.

Our friend had also been around after a Rod Stewart show and saw Rod completely wrapped in a space blanket and tottering away, supported by assistants. All that was visible the spiky tips of his famous barnet.

Then, last night the Master Electrical Engineer called with his fix for the moth trap. He stopped for coffee and a chat and eventually the talk came round to work. We'd been discussing the unwanted critters that sometimes find their way into our homes. In my case it was slugs. Yes! They are back! It's been four years but this time there have only been five infant sluglets. In our friend's case it is mice but he's dealing with it. I thought perhaps some sort of cunning electrical gadget that dispatches them to mouse heaven as painlessly as possible but he's using old-fashioned spring traps.

The work connection? A while back our friend worked for a big multinational telecommunications manufacturer. And they had a special room where they kept exotic creatures, spiders, beetles, lizards and snakes, that sort of thing. Sounds strange? I thought so. But, because the company was global there were crates coming in from all over the world and sometimes those crates were carrying passengers. 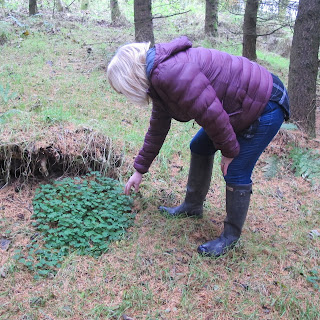 Looking for a four-leafed clover. (Even tho' it's not clover)


This woman had a mouse jump from her pantry cupboard on to her head this week. She handled it well. Yet once, when she spotted a ladybird on the dashboard of my vehicle, she panicked and shrieked and I had to pull up, rescue the ladybird and remove it to a place of safety.

Since I am rather shakey at the moment, I do understand. Love the clothes colors.

I'll pass that on! Hopefully, the shakiness will pass. Best wishes for a good recovery, Mage,