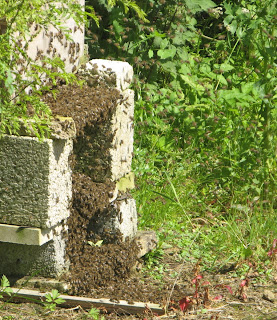 I had big plans for today but they didn't work out. For the second time in just over a week one of our hives swarmed. I came over to see the sight but didn't don the bee suit (big mistake) as I was right in the middle of a gardening project. Bert said, "They're really quiet, they won't touch you." He was probably right about 29,999 of them. The Psycho Bee stung me right in the throat. I was annoyed but not too worried. While Bert went off to capture the swarm I returned to my gardening. Young Rainey turned up and I broke off to chat with him.
It must have been forty minutes before I realised something was up. My skin felt on fire and little pimples rose up all over me. My chest felt tight and I was itchy all over. I got a pain in the middle of my back. I felt panicky. Young Rainey was Googling bee stings on his iPhone and reading out the symptoms. I panicked some more. He advised I went to the doc. I pooh-poohed thinking that I was imagining everything except the rash, which was getting worse by the moment. When my hands started to swell up in front of my eyes I did realise something was up.
I got my rings off in time and got Bert to take me to the GP which, luckily, is only five minutes away. It was out of hours so I got seen straight away. According to the doc I was having an allergic reaction, uncomfortable but not life-threatening (TG). He prescribed steroids (six straight away) antihistamine and an adrenaline shot in case I got stung again. He did not suggest we get rid of the bees.
I got worse before I got better. The hives all ran into each other and made giant hives about eight inches long and 3 inches wide. I felt as if I was on fire. But I did not scratch. I was nauseous and could not eat. I was shattered. Although it was a sad loss of a glorious day I spent most of the afternoon sleeping in bed. Here's hoping for more garden work tomorrow. 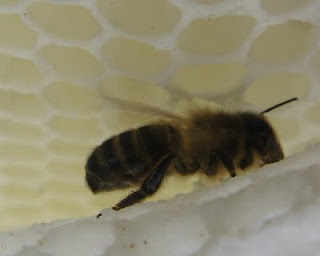 Not Psycho Bee
The thing is I've been stung lots of time before with minimal side effects. I wonder what was different about this time?
And the bees? Apparently, according to our favourite bee man, who knows everybody in the Irish bee world, we've got 'swarmy' queens and they'll never settle until we change them for sweet-tempered, settled queens which we'll probably have to import from England. See this bee-keeping lark? It's not easy. And don't get me started on bastes (cattle).
Posted by Nelly at 10:11 pm

Poor you, that sounds real nasty. Do take care.

Happy to report that I'm feeling pretty chipper today apart from a bit of itchy swelling at the sting site. And it's another glorious day!

Glad you are feeling better mum. Was worried about you. And your favourite grand daughter's home this week. Yaay.