A Visit To Rathlin 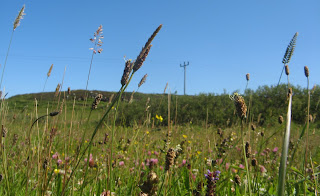 For many years now I've been meaning to visit Rathlin Island. But somehow the months slipped away and it was winter and then I'd have to defer it for another year.
But this year I was determined to get there. Swisser was up at the weekend and I asked her to come with me. She had been many times before but was more than happy to go again.
We went over on the old ferry. There weren't that many people on it and I'd say about half of them were members of the PSNI. Swisser and I were intrigued. We wondered if there was a serious crime wave on the island and the police were going in mob-handed to sort it out. There was a Massey Ferguson tractor and bush-whacker on board as well as the police Land Rover and an unaccompanied trailer load of building blocks. When we got to the island the crew asked the police to take the trailer off the boat and they happily obliged. It looked odd to see a police vehicle hauling building materials but Rathlin seems to be that sort of place. People just do what has to be done.
We set off walking to visit the RSPB bird sanctuary. It was a fair walk on a hot day but glorious. There is no intensive agriculture on the island and consequently the meadows and verges are teeming with the flowers and wildlife that I remember from fifty years ago. We saw harebells, wild angelica, meadowsweet, a variety of thyme and all the meadow grasses and flowers that are rarely seen at home.
I enjoyed the reserve. Although there were lots of other visitors the ambience was pretty wonderful. Just people of all ages delighting in the spectacular views of the colonies of birds. We saw guillemots, razorbills, fulmars, puffins, cormorants and many other seabirds. The guides were helpful and informative. I'd recommend this to anyone with even the slightest interest in wildlife.
Of course by this time my big silly face was as red as a tomato from the sun, so we decided to take the Puffin bus back to the harbour. That too was an experience. The driver was packing punctured bicycles into the back compartment, rescuing cyclists, everyone who got on had to clamber over a dog called Theo and no one minded and meanwhile the Puffin driver had us all in stitches with his banter and nonsense. He gave a running commentary of the history of the island and a bit of current affairs as well. We got dropped off at a little bay where grey seals were enjoying the sun at the edge of the water.
We weren't the only ones either. I'm sure there must have been twenty other people, most of them children, observing the seals. The animals did not seem too perturbed. I got the impression they are well used to it. 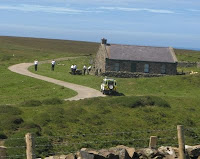 We never did find out exactly what the police were up to (even though we asked them) but I don't think it involved anything worrying for they all looked pretty happy and were enjoying the views, taking photographs of each other and they seemed to like the bird sanctuary. It will ever remain one of life's mysteries for me.
We took the new fast ferry back which was smooth and speedy but not nearly as much fun as heading over with tractors, trailers and the polis.
I can't wait to return to explore the rest of the island although I'll be lucky ever to hit on such a beautiful, beautiful day.
And I can't believe I waited so long to visit somewhere practically on my doorstep yet one of the locals told me that there are many people in Ballycastle who have never visited the island. Imagine!
Posted by Nelly at 10:47 pm

I am very jealous. The one time I went to Rathlin it lashed with rain the whole time and I didn't see a single puffin or police officer.

You must go back. I'd go with you in a heartbeat. Heartbeat! Get it?

Men in uniform! Can I go today? Seriously, I need to make that pilgrimage soon. I keep promising, but end up in Ballycastle at coming home time! :(

Well worth a visit Grannymar. The bus runs all over the island so you would only have to walk as much as you want to.

This was a very evocative post - I went over to Rathlin with Mammy and even though we could not go far on foot it was a lovely experience. xx london Sister

When did you go with Mammy? I had forgotten that.

I can't really remember if it was before or after Daddy died - it was a good while ago. xx LS