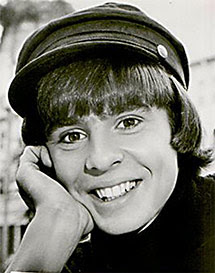 It's easy to mock the attraction that many young girls have for performers such as Justin Bieber. The fact is many of us not so young ones had our own version of the baby-face crush. Through the years there have been many of them - David Cassidy, Donny Osmond and way, way back in the day Davy Jones, the Monkees front man. Davy was a teeny-tiny English boy, trying to make his way as an actor when he auditioned for The Monkees TV show. The show was wildly successful and Davy became a pin up. I was one of his hundreds of thousands of fans.
In those days we didn't get to hear every detail of our hero's life. We only got to hear what publicists told us. Our crush was a blank canvas on which our innocent, or not so innocent fantasies could be projected. We did not have to deal with glamorous girlfriends, paternity suits or tales of drunkenness and debauchery. Davy and his ilk were the boys next door, the ones that could be introduced to Mum, who would, of course, disapprove of the long hair but would admire every other aspect of their being.
I bought the Monkees fanzine and relished every lying word. I was thirteen and hadn't discovered Radio Geronimo. Eventually my tastes changed and I transferred my affections to Mickey Dolenz. By fifteen I had outgrown the Monkees entirely.
Davy grew up, lost his teenage heart throb looks, got fatter and died. Those baby face boys don't usually make for handsome men. Donny Osmond might be an exception to that rule but that's Mormon clean living for you, or botox - who knows?
Posted by Nelly at 6:45 pm

The news about his death just hit here. I didn't watch the show....maybe I was too old, but I still sing the songs. :)

Daydream Believer was the first single I ever bought. It was a present for my cousin. We didn't have a record player at the time.