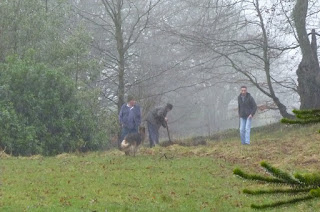 We had the Senior Dog, Paddy, humanely put down last Thursday. He'd been in a decline for the past year but had really started to fail this past few weeks. I'd say things like, "I don't think Paddy's long for this world," but he'd keep plodding on although his sight and hearing was almost away. It was two days before the end that I actually realised that he was dying. He didn't seem to be in any pain but you never know. He was certainly getting weaker. He couldn't jump on the sofa and he could hardly stand when he went outside to pee. He kept going round in circles before he'd lie down. he didn't look comfortable. He was starting to go off his food. On Thursday morning I made him a scrambled egg with butter. He ate half of it. Normally he'd have gobbled a delicacy like that. It was his last meal. Less than an hour later I made a very fast decision and called the vet.
She came to the house. Bert put Paddy to rest in the garden just after two o'clock.
Ever since I've been in pieces. I don't know why. I've lost lots of pets over the years but none have affected me like this. I think it was because it was done so quickly. But that is what we are supposed to do isn't it? Prevent them from suffering.
Posted by Nelly at 11:43 pm

Oh Nelly, that is sad, but you know you did right by the old Boy, it takes courage and love to make that decision x

Appreciate that Andrea. I've been looking at recent photos I took and I can see from them that his old age decline had been on a plateau but just a few days before he actually died it was like he'd taken a drastic dip.

You made the best decision for Paddy that you could have made, based on your love for him.

Louis, my bulldog, died in June before the vet arrived. I'm still in bits over his death but it is getting easier, as it will for you.

I've no doubt it will for it feels easier already. This post above was cathartic for me. And I still have three other dogs requiring love and attention, not to mention two cats and two pigs! We're lucky.

Do you have other pets Claire? Looking at your Flickr photographs, the ones with your husband, you both are true dog lovers.

You did a true act of kindness for the ol fellow. I buried Gus's body up under a big spruce, his spirit is with me, safely tucked in my heart. Hugs

Thanks Brighid. Paddy is under the shade of a special tree in our garden, one that has a story all of its own. I told it before but when spring comes I'll tell it again.

So many people I know have lost dogs this past few months. Will you look for another? It's what Gus would want you to do.

We got Sally, a four year old pug - and a rescue dog - four months after Louis died. We've also got Hugo, a cockatoo.
Confesses to owning seven dogs at one time when we lived in Belfast - 2 bullmastiffs, a dobermann, 2 rottweillers and two German Shepherds....

Glad to hear that you got another dog Claire. But seven dogs! Wow! And big ones too - that must have taken some work.