There are only 365.25 days in a year so it's not that great a coincidence when folk share birthdays, anniversaries and so on. Even so,  at 20 years old, I was quite taken that my new boyfriend and my mother shared the same birth date.

Forty-two years later my mum has gone, the new boyfriend is an ex-husband and still a friend. We have between us, three daughters, two grand-daughters and a grandson. Today is Mick and Matty's birthday. For the first time in decades he is here in Northern Ireland and staying with us for a couple of days. He's had a lovely day and said as much on Facebook. Today he went to Belfast Zoo with his partner Linda, his two lovely daughters, his two lovely grand-daughters and Fergus. Zoe made him a cake. Tonight he and Linda are here with me and we're watching TV and generally having a nice time.

Matty would be delighted. She was very fond of Mick. Last night I was sorting out a few things and I came across her handbag, the handbag she used for the last year of her life and a gift from me. We got it in an outlet centre in Antrim. For some reason it ended up here and it was a couple of years before I could even open it. It contains a purse full of euros, all her various cards and this photograph. It was taken not long before she died. It's not even a proper photograph, just a sample from some Photobox pictures that Zoe ordered. 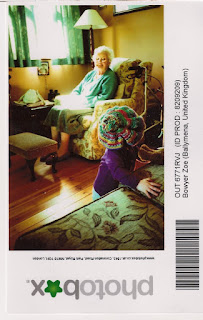 Martha Amy is in the foreground, the only one of her great-grandchildren she ever got to meet, and she is wearing a crazy hat that Matty knitted, And that would be one of the last things Matty ever made. I wonder where it is now? Some one of us will be treasuring it I'm sure, just as I treasure her handbag which is in the picture, sitting at her right hand. 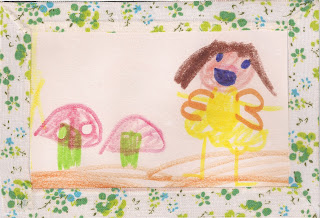