It appears to be after midnight. I prepped white currants, raspberries and gooseberries for the freezer as I watched two episodes of The Newsroom. I could have named this post Sticky Fingers. 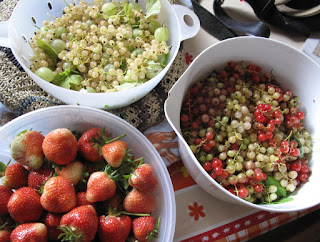 1. It was Sweet Baby James' one week old anniversary. Judging by the photographs his parents send he appears to be fairly contented with his life so far. Six more sleeps 'til I set eyes on the little blighter. 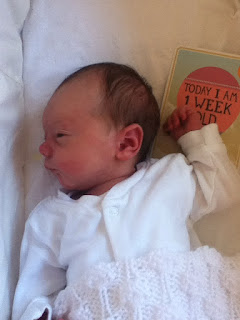 2. I was rude and cutting to one caller today because he stood too close to me as I was weeding. I ordered him to back out of my personal space and he threatened to sit on my knee so obviously I told him that I'd stab him  with my secateurs if he even dared. He stepped back.  A very wise move. 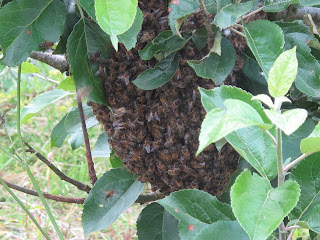 3. While I was in the fruit garden I spotted a swarm in an apple tree. Bert donned protective gear and knocked it into a yellow bucket. He then decanted them into a nuc. They all marched in then, finding their new quarters not to their pleasing, marched right out again and set up home in the yellow bucket. Bert decanted them into the nuc again and, fingers crossed, there they stayed. This swarm was from afar. Last week our own bees swarmed and although Bert tried to persuade them into another box they refused to stay and bogged off. 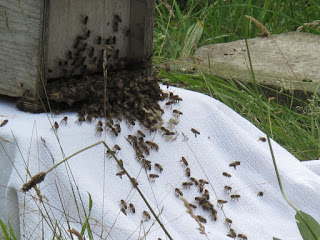 maybe the bees have done a house swap for their holidays!

If they's stayed they could have attacked Foxy!

The SIL has a great many hives, as there is so much to pollinate in his farming operations. Whenever I saw a wild swarm I told him, so he could send his bee keeper to capture them. The wild ones seem to be resistant to things the tame ones fall prey to.

James is so dang cute... I really miss my grandkids being little.

I enjoy them being tinies. Their English Granda (my 1st hubby) is staying with us for a couple of days and after we all watched a very violent episode of True Detective, we moved on to a year's worth of home movies of the kids. The English Granda and the Honorary Granny are sitting there entranced.