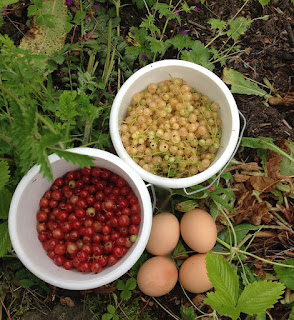 Fruit picking season has begun. It's been a damp summer and there have been better strawberries but the currants and gooseberries have been great. I haven't even started on the blackcurrants yet. We moved the hens in with the fruit bushes. It's a smaller run than they had before but Foxy has two fences to get through to get at them and so far he hasn't managed it. There is a new rooster in with the chickens. He is still a baby and the girls are being very hard on him. He came from an egg farm, one of the very few males that got through the vetting process. He was used to thousand of chickens and anonymity. Now he's the centre of attention and spends most days skulking under blackcurrant bushes waiting to be attacked.

I'm spending the evenings preparing the fruit for the freezer as I watch episodes of  The Newsroom. Last week was an anxious one as we were all waiting for Katkin to give birth. She was due a week ago today and he arrived yesterday and he's a darling. That's three beautiful grandchildren we have now. Life is good.
Posted by Nelly at 11:07 pm

Congratulations to you and Katy on the new arrival. A new baby is always exciting.

Oh I agree, new babies are very special. But then again, so are vegetable spiralisers. I want one of those too.

Congratulations on the grandson, and the double fence against the fox. The rooster sounds truly henpencked. You made me see it all so clearly.

The rooster has started to crow. Still very husky but he is getting there.