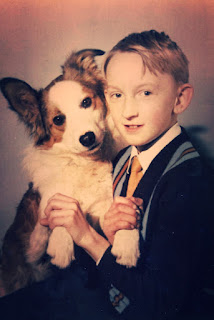 Ah Bruno. He was Bert's very first dog, one he had from a puppy. He came from a neighbour, a collie crossed with something. Who knows? In the days before neutering, responsibility and quiet roads male dogs were always wandering around impregnating bitches all over the place. And as roughly 33% of the dogs in Ireland were Border or Glenwherry collies most of those dogs were collie crosses.

Pearlie named him. She named all the dogs. Bert didn't care for now he had his very own puppy that followed him everywhere. Bruno even followed him to school, the Diamond Primary School, only a stone's throw from his house. The day that Bruno followed Bert to school was also the day the school photographer was there. Back then, the road wasn't as fast or busy as it is now and folk didn't concern themselves if their dogs strayed on the road.

Nowadays we're always taking photographs. Almost everyone has their own camera phone and most people have a digital camera as well. It's a far cry from the time when film and photo processing were expensive. So now our photographs are mainly digital and practically free. Even our pets have hundreds of pictures taken of them. But, as far as anyone knows there is only one photograph of Bruno. The one the school photographer took.

Bruno was about three years old when he was knocked down and killed on the Dreen Road. He went down the steep bank at the top of the lawn and was hit by the breadman. He was killed in exactly the same place where Charlie was to die more than forty years later. Little wonder we have it fenced off now. The Dreen Road is a dangerous place for a wandering dog.

Bruno lived at a time when photographs were precious. Maybe there was no camera in the few years that he lived. But it is rather wonderful that there is one excellent picture, taken by a professional photographer, to remember him by. Every time Bert comes across it he sighs. He loved that dog and the day the breadman came up the lane to tell them that Bruno was dead was one of the saddest of his life.
Posted by Nelly at 11:06 pm

That is an excellent photo

A great photo of Bruno & young Bert. I love old photos like this.