It is here at last. The 11th of January, a day I have been anticipating since well before Christmas. The reason I was looking forward to today was that it was the date I had set for catching myself on. The first of January would have been far too soon. A body hasn't even finished the Christmas food, never mind the alcohol and here at Nellybert's we were also receiving unsolicited donations of other people's Christmas food and drink. Tired of eating pannatone? Take it to Cully. A surfeit of Mr Kipling's mince pies? Nelly will soon redd those up. You don't actually like Bailey's Irish Cream? Gorby-guts does. She puts it in her coffee instead of milk and reels about until bedtime.

I began by weighing myself (a rarity) then I reported the result to Bert who said, 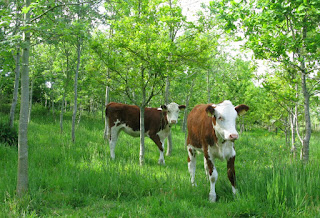 You're not! I have a heifer calf out there doesn't even weigh that much.

I had a look at those calves this morning and thought to myself I couldn't possibly be as heavy as them. At a pinch, if he really had to, I reckon Bert could lift me bodily. There is no doubt he'd do himself a mischief if he did but there is no way on earth he could pick up any of those calves.

How did the day go? It went well. I ate moderate amounts of healthy food and felt the better for it. There was just one thing. I had the strangest feeling, a feeling I haven't experienced for a very long time, a kind of flutteriness in the belly area. I believe it might be called 'peckish'.

So I distracted myself by researching typical weights of summer born Hereford heifers. That Bert! I'm only slightly above a third of what those calves (probably) weigh.
Posted by Nelly at 10:30 pm

Steady and slow is the way to go! Remember there is not much heat in a bag of bones!

That Bert is a hoot and very lucky to be still alive comparing you to a heifer. I have been catching myself on as well. I have had 1 small glass of wine this year. Disappointed that I am not finding a lost stone lying behind me every time I turn round though. Slow and steady.

Slow and steady it shall be ladies.

Good luck with the new regime. This time last year I was training for the moonwalk and I felt so much better for it.

Bert is very brave (some call it foolishness) and I am feeling better already. Just to have taken that first step...