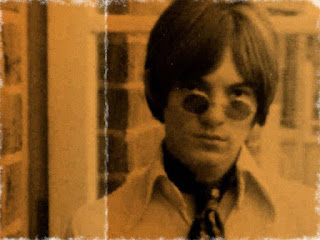 Martha and Evie like to listen to music when they are travelling with us in the van and as the only CDs that Bert had in there were by Joe Moore, Rod McAuley and Erroll Walsh (all local musicians that we know), the music they were listening to was exclusively folk and country.  Good as these fellows are I thought it was time to broaden the children's horizons. The first new piece of music I introduced them to was the Best of The Small Faces. The first track was Lazy Sunday. Play it again, said Martha. So we played it again about five times on Thursday the 2nd of January. On the 9th of January her first words on getting into the van were, "Put on 'Lazy Sunday'" We listened to it three times. She knows almost all the words now. The first Thursday...


Steve Marriott. It's from a long time ago. He's dead now.


He died in a house fire.


Then she was too busy learning the song.

He died in a fire. How did it happen?


(I never like to miss an opportunity to point out the risks of an unattended candle.)

Where is he buried?

It's when dead people are burned in a fire instead of being buried in the ground. I'll check it out for you.


I did check it out. Steve Marriott died in 1991 at the age of 44. And he was cremated. He was a talented musician and a great singer and from the tender age of fourteen/fifteen I was a fan. The Wee Manny tells me that the Small Faces played the Flamingo Ballroom in 1968. Apparently on the exact same date that Ogdens' Nut Gone Flake was released. The Wee said that one of the local hard men attacked Marriott on stage and that Marriott came off the stage and battered him.* I don't know if that is true for the Wee Manny is well-known for his far-fetched tales. I certainly won't be bringing that one up with Martha.

According to The Mojo Collection (pub. 2000) the band regretted releasing Lazy Sunday as a single as they felt it pigeon-holed them as a novelty knees-up band. Forty-eight years later I think it's still a fun track, one to share with the grandchildren. It's not my favourite Small Faces track though. That would be Tin Soldier. Released in 1967 when I was fourteen years old. I was transfixed and I have never stopped loving it. Nearly fifty years. Where does time go to?

*Back in 1978 at a Stranglers gig I did see with my own eyes Jean-Jacques Burnel come off the stage to batter someone.