A Message From My Father

Sorry Reader. I cannot settle myself to properly update Nelly's Garden until this bloody referendum is over. Who cares about Trump? Even though I have detested him since first becoming aware of him. He'll be a disaster for the world and the USA if he gains the presidency but, at worst, it's only eight years. For us, leaving the EU will be irrevocable. I just can't understand why anyone, anyone with a grain of intelligence would think leaving would be a good thing to do. I hate what the debate has become, the exaggeration, the lies, the fear of  'the other'. I also hate that Northern Ireland's particular position has been almost totally ignored.

And another thing, you people, you otherwise good people who do not exercise your right to vote - it is time to grow up. Opting out is Not An Option. Opting out is not you being too fine a person to get involved in ugly old politics. Opting out is letting the bad guys win. It's Father's Day today and my father Seamus Byrne would metaphorically kick your arse. He always said that those who don't vote are like beasts in a field. Think about it. 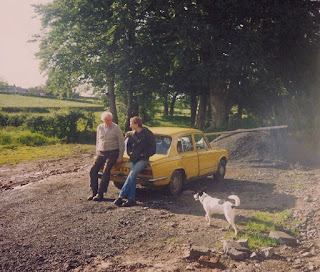 Seamus and Bert. They always voted.
Posted by Nelly at 10:55 pm